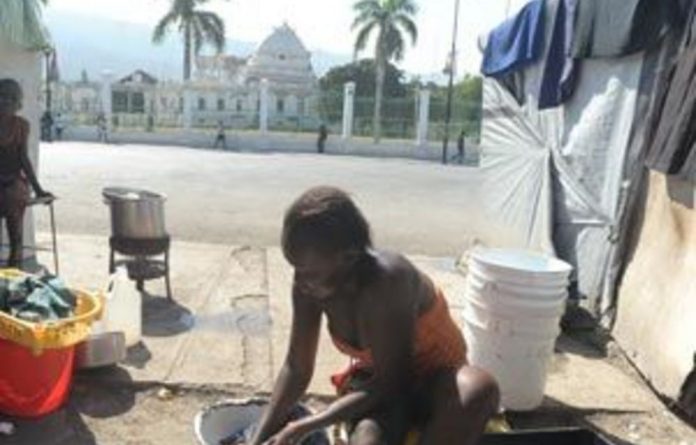 Two years after Haiti was devastated by a 7.0 magnitude earthquake, international aid donors have delivered only half of the billions of dollars promised for reconstruction, according to UN data.

Marking the two year anniversary of Haiti’s devastating earthquake on January 13 2010, which left over 200Â 000 people dead, we look at the state of the country and the difficulties Haitians continue to face.

While that is a rise from the 43% recorded last September, aid agencies and nongovernmental organisations (NGOs) such as Oxfam and Save the Children this week warned of a “severe funding shortage … threatening recovery programmes in the country”.

“There is a lot more we need to do to really get the Haitian people back on their feet,” said Gareth Owen, humanitarian director of Save the Children.

In March 2010, two and a half months after the quake struck on January 12, world leaders met in New York and pledged billions for recovery programmes.

“Our goal must be the empowerment of the Haitian people,” Hillary Clinton, the US secretary of state, told the conference. “They are the ones who will carry on the work of rebuilding Haiti long after our involvement has ended.”

Honouring pledges
Japan and Finland are among the few to have fully met their pledges, of $100-million and $6-million respectively.

UN figures also reveal that, in a country sometimes dubbed a “republic of NGOs”, few funds have gone through the Haitian government.

Only 6% of bilateral aid for recovery projects, for example, was channelled through Haitian institutions. That percentage drops sharply for humanitarian aid (less than 1%) and cholera relief (2.7%).

“We are very concerned that the money isn’t coming through,” she said. “We really need to see funds flowing into Haiti now.”

Oxfam warned this week that reconstruction was moving ahead “at a snail’s pace” and said that 500 000 Haitians were still homeless.

Positive change
“Most Haitians do not have running water, a toilet or access to a doctor; cholera has claimed thousands of lives and remains a major threat to public health; and more than 70% of the workforce is under or unemployed,” the report said.

Stocking said: “There is a sense of the economy getting going again. But we’ve still got half a million people in tents and camps. In terms of reconstruction, certainly not anywhere near enough has gone on.”

There have been advances. A Unicef report pointed out that of the 4 000 schools destroyed or damaged, 653 had now been repaired and 612 rebuilt, benefiting tens of thousands of children.

“As the second anniversary of this calamitous event … passes, there is … clear evidence of healing — and in some cases, of not just recovery, but meaningful and positive change,” Unicef’s Françoise Gruloos-Ackermans noted in the report.

She pointed to a growing number of Haitian children who were back in school and to advances in rehousing many of those left homeless by the quake.

Once omnipresent rubble is also vanishing from streets in Haiti’s chaotic capital Port-au-Prince.

According to Oxfam’s report, around half of all earthquake rubble — 5-million cubic metres of debris — has been cleared.

Withholding aid
Owen said that while Haiti faced a long road to recovery, a “huge amount” had been achieved since the quake.

“The fact that there are still half a million people living in makeshift camps or tents — though it is very sad — we kind of figured it might end up being that way,” he said.

“It is hard to underestimate the catastrophic effect the earthquake had on the infrastructure and the government in Haiti.”

He recalled attending meetings with senior government officials after the disaster.

“They wouldn’t have anything, not even a pen or paper. It was as if the centre of Whitehall had been taken out.”

Donor countries had partly held back bilateral aid, he said, because “the government of Haiti has to be able to administer that resource”.

Crippled by the quake, many departments had simply not been able to do so.

Stocking said a five-month delay in forming a new government after Haiti’s president, Michel Martelly, came to power in May was a key factor in donor countries not fulfilling more of their pledges.

Partnerships
“It is understandable to some extent why that is the case … When you don’t really have a functioning government donors are unlikely to have faith.”

Martelly issued a rallying call to his country’s politicians and senior civil servants on Monday.

“The moment has come for the country to move in another direction,” he told them. Haiti, he said, now needed: “Liberté, Egalité and, above all, Fraternité.”

Martelly said his priority was building “a more socially just Haiti” including “free access to quality schools for all Haitian children”.

Tom Adams, the US state department’s Haiti special coordinator, defended the international response to the crisis.

“Quite honestly, donor funding is never going to be enough,” he told the Miami Herald. “In some areas, we are really just starting, because we wanted it to be a Haitian-led effort, not a donor-led effort.

“We are criticised for not spending the money faster but in some ways that’s a virtue. To spend intelligently, it has to be done in partnership with the government and other donors.” —