A new generation at war 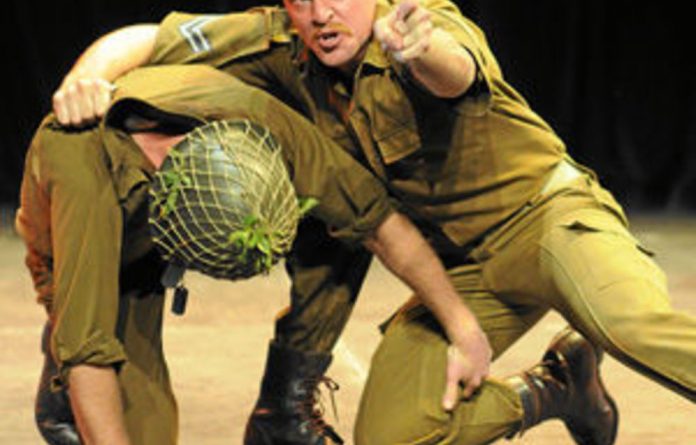 This week Anthony Akerman’s iconic anti-war play, Somewhere on the Border, opens at the Market Theatre — almost 30 years after it was ­written. Directed by André Odendaal, the story follows six young conscripts and their bullying commander from their basic training to their posting on the Angolan border during the bush war.

Using the peculiarly white South African racist vernacular of the day, this once-banned play deals with apartheid, which is of course central to the story, but does not fit neatly within the protest theatre genre. This is something different, and although the cast is entirely Southern ­African, none was born when Akerman wrote the play. In some ways ­familiar, this past is truly another country for them.

As Odendaal says: “I think we’ve made enough anti-apartheid statements in the theatre. My reason for doing it was to make an anti-war statement because, as we know the world at the moment, everybody is engaged in some war, somewhere.”

Most of the cast are just starting out in their careers. “Doing it with seven actors who have no connection to those times was interesting. So I had to find a point of departure, which for me was [to] use the play as a premise, to make a statement about young men and the effect that war has on them.”

Driven by hate
“I grew up colour-blind,” says 28-year-old Charlie Bouguenon, the oldest member of the cast. Playing Bombardier Kotze, the hard and brutal career soldier, “was strange for me. I’m playing the real bastard, the antagonist. It’s really hard. I’m a ­vegetarian. I’m not racist at all. I really have had to dig for this, because this character is driven by hate. He’s got a lot of issues.”

Odendaal was himself a young conscript during the border war, but managed to avoid combat and refused to carry a rifle. He recalls the mood at the time. “None of it ever made any sense to me, because I didn’t really know the enemy. I didn’t really understand what we were ­fighting for. Everything was banned. Nelson Mandela was this figure, a ghost out there.”

At the end of the play one character shouts “I had no choice!”, Odendaal says. “So what this play shows, and what the younger audiences who’ve seen it realise, is that there were white people who were also victims of apartheid and that’s something that people never realised at the time.”

Odendaal recalls that if you refused the call-up, you could be imprisoned for six years. Young men who tried to dodge the draft by pretending to be mentally unfit, or who were gay, were given electric shock treatment to force them to conform.
He talks of the shell shock, crudely called bosbefok, suffered by many conscripts, many of whom were in their late teens. “You’re ­brainwashed and then when it ends you start ­realising what actually went down and then the depression sets in.”

Banned immediately
Playwright Akerman, who spent time in the army in an earlier period, managed to avoid taking part in the war by leaving for Holland in the 1970s. “It was a kind of ‘what if?’ story,” Akerman says. “If I hadn’t left the country, I could have been sent to the border and I might have ended up doing things that I would regret for the rest of my life. So that was the story I set out ­trying to write.”

Akerman was given money by the Dutch government to produce the play in Amsterdam with South ­African actors, many of whom had fled the army themselves. He sent the script to Athol Fugard, a great ­influence on Akerman, but it was intercepted in the post and found its way to the censors, who promptly banned the play.

University of the Witwatersrand lecturer Ampie Coetzee advised Akerman to write to the censorship board and demand reasons. And they replied, saying “‘fuck you’ is objectionable, et cetera”.

Additionally, the story was ­prejudicial to the state because the final scenes placed the military in a poor light.

In 1986 a group of actors based in Bloemfontein agreed to perform the play regardless. And there was no intervention from the censorship board. “But there was interference from other sources,” says Akerman.

After opening in Grahamstown, the play moved to Cape Town where the military police confiscated all of the army uniforms the cast were using because there was a law against that. “But it was certainly being used as a form of intimidation,” says Akerman. This made the papers and it backfired for the authorities as people wanted to see what all the fuss was about.

Return from exile
When the play went to Johannesburg in 1987, two of the actors were severely beaten up by thugs from the so-called military Civil Co-operation Bureau. Akerman was refused entry into the country, apparently on orders from the very top, and was not able to see his own play in South Africa until 1990 when he returned from exile.

This new production comes at a time when the dirty border war is finally being discussed in public.

“It is interesting that so little was said about this for the last 20 years or so, since the new South Africa. There’s been a kind of conspiracy of silence about it, because on the one hand the government, the ANC people don’t really talk about that,” says Akerman. “And there are some impenitent ex-generals still talking all the shit about how if they hadn’t fought in Angola we wouldn’t have had the Constitution we’ve got now and so people can spin it every way that they want to.”

Initially the play was “more of an act of protest; now it has a different function. It can help perhaps to kick off a conversation with a different generation of fathers and sons”, ­Akerman believes.

“It can help people come to terms with that. The guys who came out of the war — a lot of them weren’t OK.”

Somewhere on the Border is showing at the main theatre in the Market Theatre Complex until February 12. Tel: 011 832 1641