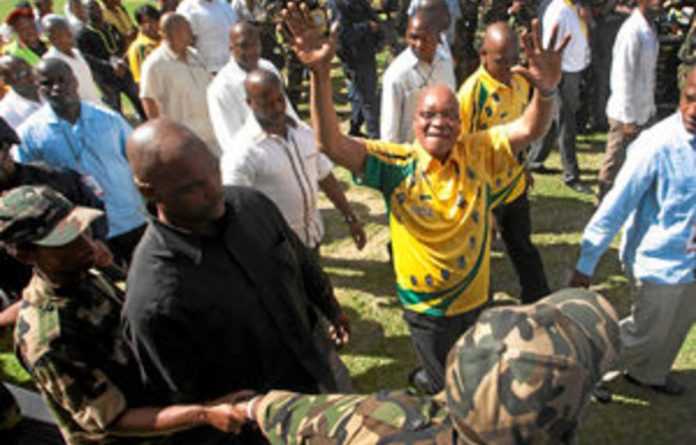 The pantypreneurs, gold-diggers in stilettos and two-inch dresses, who show off their underwear, lined the passage to the VIP sections at the popular, trendy nightspot Cubana in Bloemfontein like hopeful debutantes. Suspended national police commissioner General Bheki Cele had just swaggered into the room wearing his famous black Borsalino hat and royal-blue suit as he made his way to the reserved enclosure where tables cost R50 000 each.

Only a thin gold velvet rope separated the VIPs from the pantypreneurs and the rest of the patrons.

Behind Cele, ANC national executive committee (NEC) member Tony Yengeni, in his less sophisticated blue Fabiani baseball cap and sports T-shirt was already on his second glass of expensive champagne, entertaining guests. Next to him stood ANC head of campaigns and Sports Minister Fikile Mbalula, his KwaZulu-Natal and Free State comrades and the ever-present tenderpreneurs.

Johnny Walker Gold and Blue and Glenlivet 12-year-old single-malt whisky (between R1 400 and R4 500 a bottle) were on the table, while hundreds of bottles of Moët, Veuve Clicquot and Dom Pérignon Rosé (between R1 000 and R4 000 a bottle) flowed. It was Saturday night, January 7, the eve of the main celebrations, and Cubana — and Cappello a few metres down the road — were pumping, struggling to cope with the thousands of partygoers jostling to be part of the action. It was the place to be seen, even if you just cruised up and down Second Avenue in your fancy 4×4.

“We can seat only 180 people, but were accommodating 800 people a night,” George Davelis, the co-owner of Cubana, told the Mail & Guardian. The crème-de-la-crème of the political and business world had booked tables. Even the rickety plastic tables outside were being auctioned off for about R10 000. On Friday night, the Kenny Kunene crowd was in full force at the VIP section but the sushi body shots were absent.

It was a pantypreneurs’ paradise, and a free-for-all meat market as ANC comrades revelled in the social networking, just a grope away from sexual harassment. This scene played out at almost every social event in Mangaung from Thursday to Sunday when high-rollers spared no expense in their celebration of the ANC’s centenary. MECs, premiers, Cabinet ministers as well as President Jacob Zuma were also partying up a storm, but in the private enclave of Free State premier Ace Magashule.

By day, the ANC elite partied with the masses in the townships, lining the streets with their top-of-the-range luxury vehicles to attend rallies and other celebratory cultural activities. It was perfect free advertising for car manufacturers such as Range Rover, Audi, Porsche, BMW and Mercedes-Benz.

The streets would come alive as they moved in convoy with their windows down, flying ANC flags and hooting and waving at their comrades before converging at the shebeens and chisa nyamas, where they drank beer, ate pap and vleis, and danced to the tunes of the DJ playing struggle songs.

The jubilation was infectious and a financial blessing for the family-run Sechaba chisa nyama on Moshoeshoe Street in Rocklands, which netted about R200 000 last Saturday, compared with about R5 000 on a normal weekend.

Everyone in Mangaung, the birthplace of the ANC, scored from the informal trader selling goods, food and memorabilia on the streets to bottle stores, shebeens, restaurants and fly-by-night photographers selling instant pictures of partying comrades.

Restaurant and nightspot owners the M&G spoke to said takings over the four days were what they would normally glean in a very good month.

The owner of the bottle store near the Lebohang government building in the Bloemfontein city centre said he raked in R200 000 just on Saturday, and shebeens reported takings of up to R45 000 a day. Nando’s near the stadium sold out of chicken on most days.

All accommodation establishments were fully booked, housing 157 000 people, and were able to charge premium prices. Even the residents of Bloemfontein opened their houses to guests for between R5 000 and R35 000 a night.

At the two Protea Hotels, which were occupied mostly by politicians, many businessmen were seen frequenting specially set up private rooms, where, according to one staff member, “whisky was flowing, and lots of deals going down”.

Between the politicians, tenderpreneurs, the media, local residents and the hundreds of thousands of ANC supporters who arrived in busloads from around the country, more than R1.2-billion (a local tourism authorities’ early tally) was spent over five days in the normally quiet district. That excludes the R100-million the ANC reportedly splurged on its own celebrations.

It’s not clear how many deals were sealed in Mangaung, but Bloemfontein is still reeling in the aftermath. “It’s like a storm hit us. We’re exhausted. It feels like a massive hangover,” said Sipho Mbuyisa, an entrepreneur in the tourism industry. “Once we recover, we’ll have to prepare for Hangover 2 in June and Hangover 3 in December.”