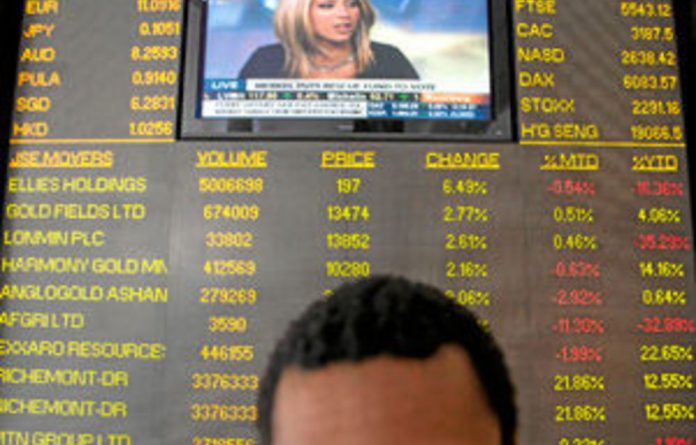 The R1.3-trillion bond market, which the government uses to raise funds to service the country’s debt, is accused of being controlled by an oligopoly of eight local and international banks called “primary dealers” that engage in “opaque” and “uncompetitive” pricing structures.

Critics, including the JSE, say poor transparency and price distortion is filtering into the bond market at a time when global markets are being battered by the fallout from the sovereign-debt maelstrom. The claim is that lack of transparency leads to inefficiency, which can stump growth and negatively affect liquidity in the market.

The Financial Services Board (FSB), which regulates this market, and the treasury, which has the political responsibility for it, are aware of the growing dissatisfaction with the present state of the market and have signalled that it is being reformed.

But tension between the primary dealers and the JSE has also developed into a fierce debate between the two sides, with the former saying that the JSE is pushing for changes to get the biggest slice of the R6.6-trillion turnover bond market to recoup the costs of its pricey R260-million merger with the Bond Exchange of South Africa. Dealers are threatening to take some of their present trade offshore.

The dealers said the fact that liquidity had grown dramatically since 1998 when the present system was established, from 9.5-million trades to 20.8-million last year, showed that the system was working.

Currently, the primary dealers — which include the big-four local banks, as well as Investec, Deutsche, JP Morgan and Citi — buy about R2.1-billion of nominal and R800-million linked government-issued bonds at the weekly Tuesday auction, which they sell on to investors at their own margined price.

Every second Friday, there is an auction of inflation-linked bonds. The price, negotiated between the bank and buyer by phone, email or other communication, is only reported to the JSE 30 minutes after the trade — there is no real-time electronic central order book as with equities trading.

The JSE, which now regulates the bond market following the 2009 merger, is pushing for this structure to be changed. “It’s a highly concentrated industry, with a lot of power in the hands of a few players,” said Graham Smale, the director of interest rate products at the JSE.

“It’s completely oligopolistic. They operate in an opaque way, pricing according to demand, and they prefer that no one knows how they price. There is a constant guessing game between the dealer and client, and they quote aggressively to get the business.”

The JSE, regulated by the FSB, which reports to the treasury, has been advocating new rules since February 2010. The exchange wants public, real-time transparency in liquid government bonds, as outlined by the International Organisation of Securities Commissions, the body that sets policy for securities regulators such as the FSB.

Under pressure from the JSE, the FSB drafted proposals last year to restructure the bond market as part of broader financial reforms led by the treasury and the Reserve Bank.

In his 2010 February budget speech, Finance Minister Pravin Gordhan announced a “twin peaks” model of regulatory reform. Under this model, the Reserve Bank acts as the prudential supervisor and the FSB regulates market conduct and consumer protection.

“The policy document [on the bond market] sets out options to increase greater transparency and efficiencies in the market, with the ultimate objective of developing the local domestic bond market to support economic growth,” said treasury spokesperson Bulelwa Boqwana.

Based on inputs received by the October 2011 deadline by all the main players – the JSE, primary dealers, inter-dealer brokers and issuers — and after several subsequent meetings, a revised paper is being drafted. The proposals come at a time when governments worldwide are facing regulatory pressure by global standards setter Basel III to transform the financial-services sector and create more transparency and liquidity in the market to avert and better withstand another crisis.

All players have now agreed that, given the importance and role of the bond market in the economy, there shouldn’t be a “big bang” approach that could destabilise the market; rather, changes will be phased in.

“Given the pressure on bond markets globally, any reform to the South African regulatory framework will be done in a measured, balanced and consultative way,” said Boqwana.

The proposals on the table
The JSE has proposed a raft of ideas that start with increasing transparency. Its chief criticism is that outsiders cannot see the initial trades made by the primary dealers.

Its initial idea is to set up a bulletin board as a form of price display that would still require the primary dealer to contact the counterparty to deal, with anonymous electronic trading phased in over time, starting with the more liquid bonds (R157, R186 and R207 and R208). Another proposal is for the creation of an all-bond index.

The principal dealers’ association agrees that there should be improved “pre and post-trade transparency and fair trade”, but said there shouldn’t be rules on how they could trade the market. “We’re not unscrupulous. As primary dealers, we adhere to the rules,” said the chairperson of the association, Neil Evans.

The debate was more about the manner in which the bond market chose to trade. The fact that liquidity in the bond market was at an all-time high showed the system was working, said Evans. The question then was: Why change a system that was growing in turnover and volume?

He said the JSE had instigated the proposed changes so it could gain a piece of the R6.6-trillion turnover bond market to recoup its costs of the bond-exchange merger.

“We are a proprietary trader and we put the bank’s capital at risk when we buy bonds at the auction. There is no upfront fee on the market. There are no guaranteed prices for the primary dealer. In the United States, there are about 35 primary dealers dealing over the counter; that’s why there’s more transparency,” said Evans.

Another primary dealer who did not want to be named said: “The problem with the proposal is the JSE wants us to put up a price on the screen. We’d rather go trade offshore and settle offshore than trade in the South African market.”

“The regulators are playing a dangerous game. The biggest risk that South Africa faces with a new structure is if the banks choose not to be primary dealers and the Reserve Bank doesn’t have guaranteed auctions. The government must be able to fund its budget deficit, so regulators should be careful of breaking a system that brings in liquidity.”

The background
How did this situation develop? In April 1998, the Reserve Bank and the treasury chose to relinquish their duty of being the single primary dealer. They chose to offer this role to the banks (there were 12 at the outset, including international banks) but there was no contract between the treasury and primary dealers, only a set of agreed rules.

There were two obligations: the principal dealer must bid for an equal percentage (at least 15%) of the weekly debt and quote a two-way price in the secondary market. The first year was the one of the worst bear markets the principal dealers experienced, with yields climbing from 13% to 20% in the six months from April to September 1998.

At the onset of the primary-dealer model, there was no upfront fee. As an incentive, the Reserve Bank and the treasury agreed to a system whereby banks would be rated by their primary uptake (how many bonds they buy) and their secondary participation as a way to secure the offshore mandate. The offshore mandate comes with a guaranteed fee (a commission of between R5-million to R10-million). The Reserve Bank issues R150-billion of local bonds a year (92% of all bonds issued) and the offshore mandate is $1.5-billion (about R12-billion).

So, why have primary dealers dropped from 12 to eight? The problem was that, once clients found out about the non-competitive auction allocation, the primary dealers had to pass that incentive on to them and it became unattractive to be in that space if they couldn’t get the prized offshore allocation. “So, the greyness of the market is where a little bit of fat is factored into the pricing to make some money,” said Evans.

“What are we concerned about is, if we have to make an electronic price, does it relieve us of the secondary market obligations under the treasury? The reason there is poor liquidity in the secondary market and poor price transparency is that there are too few primary dealers putting prices on the screens. There is no money in the system.