‘Motala not fit to be reinstated’ 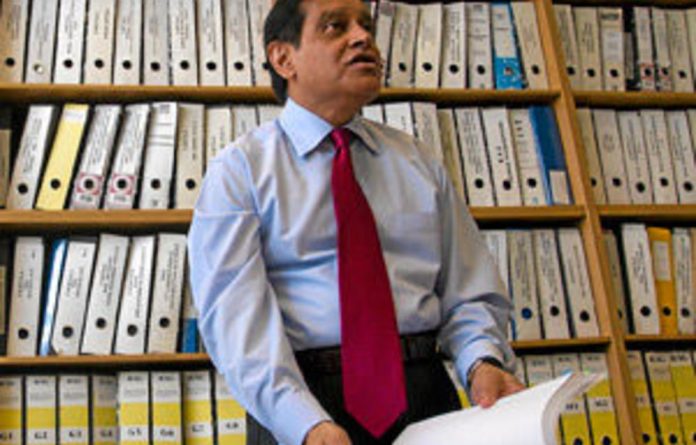 The master of the North Gauteng High Court has levelled grave new allegations of fraud against embattled liquidator Enver Motala, who is fighting his removal as one of the joint liquidators of gold mines formerly run by Aurora Empowerment Systems.

In papers filed last month Christine Roussouw, deputy master of the North Gauteng High Court, alleged that Motala was present when an in-house legal adviser for Aurora was instructed to write a “fraudulent letter” claiming to represent Malaysian company AM Equity and also that the company had made R20-million available for Aurora to purchase two gold mines formerly owned by the Pamodzi Gold group.

The instruction was allegedly given in Motala’s presence by Faizel Bhana, a member of the controversial Bhana family and former consultant to Aurora.

Arguing that Motala should not be reinstated as a liquidator of the Pamodzi mines, Roussouw echoed media allegations last year that Motala lied under oath about his past conviction on 93 counts of fraud and theft, which he allegedly tried to hide by changing his name from Dawood to Motala in the 1980s (see “Allegations about a shady past dodged” below).

She also alleged that Motala was seriously conflicted in that he lent Aurora R3-million through his company, SBT Trust, in 2010 while he was one of the joint liquidators.

Aurora, whose directors include President Jacob Zuma’s nephew, Khulubuse Zuma, and Nelson Mandela’s grandson, Zondwa Mandela, was chosen to take over the running of Pamodzi’s Grootvlei goldmine on the East Rand and Orkney gold mine in the North West based on its assurance to the joint liquidators that it had AM Equity’s financial backing to buy the mines and ensure their continued operation.

Mismanagement
Following media and trade union reports that lack of funding and mismanagement had led to illegal mining, asset-stripping and a failure to pay workers’ wages, the master called an inquiry in May 2011 under section 417 of the Companies Act to scrutinise the liquidation process.

It was during this inquiry, Rossouw said in her affidavit, that Aurora’s “in-house legal representative” Callie Smit revealed the alleged fraud.

Smit testified that Bhana called him to Motala’s Rosebank, Johannesburg, offices on the morning of February 5 2010. Bhana then asked him to write a letter to Pamodzi’s provisional liquidators on AM Equity’s behalf, stating that the company had deposited R20-million into his trust account.

In the transcript of his testimony, Smit claimed that he wrote the letter after being told that Aurora “needed my assistance regarding a letter that has to go to the liquidators — to confirm the availability of the money”.

Smit said that Motala was not present when he typed the letter, but was present during the discussion about the letter’s contents. “He [Motala] was there when they asked me to actually do the letter,” he said in the transcript.

Smit admitted that the R20-million was a fiction and that the company did not instruct him to write the letter. However, he did know Raja Alam Shah, a shareholder of the AM Equity consortium and an Aurora director at the time.

No explanation
Asked why he had written a letter on the company’s behalf when it had not instructed him to do so, Smit said: “I can’t explain that. It was requested and unfortunately I was the one that wrote it.”

In her affidavit, Rossouw said that Motala “participated in committing fraud on his joint liquidators designed to, and which had the effect of, convincing them of the financial ability of that purchaser [Aurora].

“It appears that what commended Aurora to Motala was the fact that a nephew of President Zuma and a grandson of President Mandela were among its directors and that it was effectively run by two friends of Motala, Messrs Faizel and Solly Bhana,” Rossouw said.

AM Equity withdrew funding in April 2010, allegedly because of mismanagement at Aurora, which repeatedly failed to secure funding from other investors until its contract to operate the two mines was cancelled last year.

Rossouw said that, during a presentation to Parliament’s minerals and energy committee last year, Motala claimed that Standard Bank had verified the company’s credentials and “we received a favourable and positive report that ‘AME’ was in fact a credible company”.

However, Sandra du Toit, a director in Standard Bank’s mergers and acquisitions division, was quoted as testifying during the closed May 2011 liquidation inquiry that the bank visited the listed address of AM Equity in Kuala Lumpur and could not ascertain whether the offices were that company’s, as they were vacant and used as general rental offices.

No endorsement
Du Toit testified that Standard Bank was “therefore not in a position to say that this is proper funding. Standard Bank was not endorsing this.” Rossouw said that this evidence was “exactly the opposite” of what Motala told the parliamentary committee.

In response to assertions in Motala’s founding affidavit that the joint liquidators had kept the master abreast of the liquidation process, Rossouw claimed that the liquidators’ reports contained no information on illegal mining, asset-stripping, the non-payment of miners or the environmental damage caused by acid mine seepage.

“I found the reports singularly unhelpful in relation to these issues,” she said.

“There is no indication that the joint liquidators visited the mines to see asset-stripping for themselves.”

Referring to a photograph taken at one of the mineshafts, Rossouw said that “the headgear of the mine had been removed completely, leaving an empty hole in the ground”.

The master removed Motala as a liquidator after Smit’s evidence and Motala’s alleged refusal to answer questions at another inquiry into the Pamodzi liquidations under section 381 of the Companies Act in May last year.

No direct answers
In his 700-page founding affidavit Motala did not give a direct answer to any of Roussouw’s allegations. Instead, he claimed that the section 381 probe that led to his removal as a liquidator was unlawful.

Motala argued that the inquiry was “procedurally flawed and unfair” because he was given insufficient time to prepare and that the master did not give him the reasons for holding it.

He claimed: “The purpose of the inquiry was of an accusatory nature and that I should have been informed of the nature thereof and the scope of the questions and that my refusal in the circumstances was perfectly justifiable, notwithstanding that I was in law entitled to know.”

Rossouw maintains that the inquiry was necessary and lawful, as the Companies Act empowers the master “at any time [to] require any liquidator to answer any inquiry in relation to any winding-up in which such liquidator is engaged and may, if he thinks fit, examine such liquidator or any other person on oath concerning the winding-up.”

Rossouw also wants the court to confirm her disqualification of Motala “from nomination or appointment as the liquidator of any company” on the grounds that he lied under oath about his theft and fraud conviction.

She said that Motala also tried to enlist the help of Justice Minister Jeff Radebe, to whom he copied email correspondence with the master relating to his removal.

An earlier controversy
In 2002 Motala’s relationship with former Justice Minister Penuell Maduna made headlines after the latter appointed him as a liquidator in the winding up of the Retail Apparel Group following the dismissal of Mike Tshishonga, the former deputy director general of justice.

Tshishonga allegedly raised concerns about Motala’s involvement in the Retail Apparel Group liquidation and his relationship with the assistant master in the Pretoria master’s office, Leon Lategan, who controlled most liquidation appointments and now works for Motala’s SBT Trust.

Motala is due to file his response at the end of the month.

Allegations about a shady past dodged

Pamodzi liquidator Enver Motala refused to confirm or deny that he is the same man as Enver Dawood — who was convicted of 93 counts of theft and fraud in the late 1970s — during a Companies Act inquiry, the master of the high court has alleged.

The master called the inquiry in August last year in response to a report in the Citizen newspaper alleging that Motala had the same identity number as Dawood, deputy master of the court Christene Rossouw said in an affidavit.

She was responding to Motala’s application for reinstatement as a liquidator of mines formerly owned by the Pamodzi Gold group.

The Citizen reported that Motala had changed his name in 1981 to disguise his conviction. When Rossouw questioned him in July 2011 about the allegation, Motala responded: “My only comment at the time was, and I quote: ‘I, Enver Motala, have no previous convictions that disqualify me from acting as a trustee or a liquidator’.”

Motala told the master that his lawyer, Ian Small-Smith, had investigated the matter with the police and “it was found that there are no convictions recorded against my name. My identity document was issued to me already in August 1998.”

Rossouw states in her affidavit that she was not satisfied with his response and had “a measure of concern about why it was necessary for Motala to investigate whether he had convictions recorded against his name. I would have expected that to be something that was known to him”.

In correspondence with Motala after the inquiry, Rossouw referred to a copy of a letter discovered by her office, dated September 2 1981, to the internal affairs department, signed by an attorney “purporting to represent one Mr EM Motala”. The attorney asked for information required by the joint matriculation board “to obtain a matric certificate in Mr Motala’s name”.

In its response, the department “certified that Enver Mohamed Motala had altered his surname from Dawood to Motala on 29 June 1981”. Motala’s response to this revelation was to claim that Rossouw had acted unlawfully in carrying out the inquiry, which fell outside of her powers and was “an abuse”.