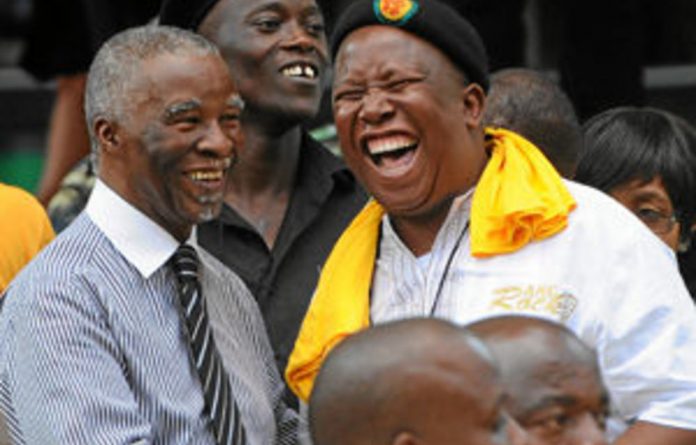 Two separate legal proceedings, one later this month and another in February, could change the course of South African politics.

President Jacob Zuma supporters and those of ANC Youth League leader Julius Malema are pinning their hopes on the outcome of these cases, which could determine the future of the men’s political careers.

At the same time, attempts to lure former president Thabo Mbeki back into mainstream ANC politics are intensifying.

Zuma’s detractors in the ANC are hoping that the Supreme Court of Appeals will find against him on February 15 and set aside former director of public prosecutions Mokotedi Mpshe’s decision to halt his prosecution on fraud and corruption charges in 2009. The Democratic Alliance (DA) has taken the National Prosecuting Authority (NPA) and Mpshe to court to challenge the decision to halt Zuma’s prosecution.

Malema’s enemies, on the other hand, are pinning their hopes on the chairperson of the ANC’s appeals committee, Cyril Ramaphosa, to uphold the disciplinary committee ruling to suspend Malema’s ANC membership for five years. That would weaken the youth league’s campaign to replace Zuma with Deputy President Kgalema Motlanthe at the ANC’s elective conference in Mangaung in December.

Malema’s appeal will be heard on January 23.

Although the ANC has not opened nominations for leadership positions, lobby groups are already campaigning for candidates and tensions over the ANC’s leadership was evident at its centenary celebrations in Mangaung last weekend, when the youth league, trade-union alliance partner Cosatu and the ANC Veterans’ League questioned the party’s reasons to exclude them from the official programme of messages of support.

Political observers have described the move as a strategy by the ANC top brass to block Malema from contradicting and embarrassing Zuma in front of international guests. In the past, Malema has lambasted Zuma’s leadership style publicly and accused him of lacking Mbeki’s vision.

The re-emergence of Thabo Mbeki
On Sunday, Malema posed for pictures and shared jokes with Mbeki and could not hide his excitement about the possible re-emergence of the former president. He later remarked in a radio interview that Mbeki should reconsider his decision not to participate in domestic politics, saying he was “depriving us of that intellectual wealth”.

Mbeki, who had not attended an ANC function since he was recalled by party leaders as the country’s president in 2008, received a warm reception in Mangaung and thousands of ANC members cheered wildly when his name was mentioned by ANC chairperson Baleka Mbete.

The Mail & Guardian understands that an informal discussion is taking place to persuade Mbeki to return to mainstream party politics with some claiming that he could contest the presidency of the ANC again. As an example, they cite former ANC president Zacharias Mahabane, who served twice, from 1924 to 1930 and from 1937 to 1940.

The DA is asking the appeal court to set aside Mpshe’s withdrawal of charges against the Zuma, arguing the decision was irregular. It claims that Mpshe should have placed the matter on the roll before withdrawing the charges.

At the time, Mpshe claimed he withdrew the charges on the basis that there had been secret connivance between former Scorpions boss Leonard McCarthy and former NPA head Bulelani Ngcuka, which amounted to an intolerable abuse of power.

In his responding affidavit, Zuma argues that the DA’s challenge should be dismissed because a successful prosecution would result in his being removed as president and it would score political points for the party. Zuma is of the view that the review of the NPA’s decision would infringe his privacy and dignity.

“The DA and the third respondent [Zuma] and his political party are foes; the DA is also the official opposition and opposed to the third respondent [Zuma] presidency,” Zuma argues. “His entire life must now be made available through financial and other documents and statements by person of such material and the subsequent publication thereof in the press is real and significant.”

A lawyer who is also an ANC office bearer opposed to Zuma told the M&G this week that the arguments presented in court by the DA were strong and could result in the reinstatement of fraud and corruption charges against Zuma.

In 2005, Judge Hilary Squires found that Zuma’s former financial adviser Shabir Shaik had a corrupt relationship with Zuma — he deposited payments into Zuma’s bank account and solicited a R500 000 bribe for him from French arms company Thint. Shaik was found guilty and sentenced to 15 years in jail in 2005. He was later granted parole on medical grounds.

In recent months, Zuma has had a rough time. He has lost a number of key cases in court, including his ill-considered attempt to extend Sandile Ngcobo‘s term as chief justice. He suffered another major blow when the courts declared that his appointment of NPA head Menzi Simelani was invalid.

Also his decision to establish a commission of inquiry into the arms deal has been described as a pre-emptive move to prevent the Constitutional Court from prescribing the terms of reference to him.

The anti-Zuma group is already lobbying for him to be recalled if the appeal court finds against him on the grounds that the ANC could not afford to have a sitting president with corruption charges hanging over him.

“The ruling is going to change the cause of the succession battle in the ANC,” said an ANC leader.

Former NPA head Vusi Pikoli told the M&G this week that he stood by his position that the NPA should have allowed a court of law to rule on the authenticity of the secret tapes that Mpshe relied on when he decided to discontinue Zuma’s prosecution. In September last year, Pikoli told the Times newspaper that the spy tapes did not materially affect the case or the evidence the NPA had against Zuma. He was commenting after the Commission for Conciliation Mediation and Arbitration (CCMA) ruled in a separate case of unfair dismissal that the tapes were illegally obtained.

“I have always had a problem with dropping the charges. The matter should have been settled in court rather than for some individuals to decide on their own,” said Pikoli. “It’s still unclear what test they applied when coming to the decision. This [CCMA] ruling adds weight to the position I have always held. In some way, I am vindicated.”

Malema’s appeal
Malema is expected to argue that his case was politically motivated and that the chairperson of the disciplinary committee, Derek Hanekom, went all out to persecute the youth league leaders. He will also argue that ANC secretary general Gwede Mantashe prejudged the outcome by telling delegates of the Food and Allied Workers Union that the youth league leaders would be punished. Malema will also argue that the league’s leaders were not given an opportunity to present mitigating factors before their sentencing.

The controversial spy tapes that got Zuma off the hook will not just feature in the DA’s court bid to overturn the dropping of fraud and corruption charges against the president, they will also play a starring role in the battle over the future leadership of the NPA.

Asset Forfeiture Unit chief and former Special Investigations Unit (SIU) boss Willie Hofmeyr is seen by some in the government as the leading candidate for the job, but his opponents are keen to cite as evidence against him his reliance on the illegally obtained recordings when he dismissed his SIU deputy, Faiek Davids, early last year.

Hofmeyr said the tapes showed that Davids had connived in the interference by Mbeki in the prosecution of then-deputy president Jacob Zuma.

The CCMA declared the tapes illegal in September last year during a labour dispute between Hofmeyr and Davids. The SIU has since taken the case to the Labour Court for review.

SIU spokesperson Marika Muller told the M&G this week that, although the SIU respected the CCMA and its commissioners, it believed the ruling was incorrect. Muller said, after listening to the tapes, Hofmeyr formed the view that Davids was not suitable to occupy the position of deputy head.

“The commission’s decision does not alter that fact. Mr Hofmeyr’s evidence at the hearing was that he believed the recordings had been lawfully obtained. He stands by that,” said Muller.

In a strongly worded letter to the M&G this week, Davids’s lawyer Sonia de Vries said that Hofmeyr was not fit for the NPA job and that he might have lied about the reasons to get rid of Davids as his deputy.

“The ruling by the CCMA regarding Hofmeyr’s alleged listening to an illegally recorded conversation just underlines the false basis on which Hofmeyr sought to justify Mr Davids’s dismissal,” said De Vries. She asked why, if Hofmeyr believed Davids did something wrong, he did not hold a disciplinary hearing as early as 2009 when he became aware of the information he relied on for Davids’s dismissal.

“If indeed former national director of public prosecutions, Bulelani Ngcuka, made improper and illegal suggestions to him [Hofmeyr] as far back as 2007 [in the East London conversation], why did he wait until 2011 to raise it for the first time. He had ample opportunity to charge Ngcuka. Not only did Ngcuka deny this but the probabilities point to Hofmeyr lying about the content of this conversation which he had with Ngcuka.”

Responding, Muller said: “We would like to emphasise that Mr Davids never denied that this conversation [between him and former Scorpions boss Leonard McCarthy] took place. Given the seniority of Mr Davids’s position, it is inconceivable that he would not be confronted about what is in the tapes.” Mr Hofmeyr and Mr Davids had on many occasions discussed the need for the SIU and law enforcement institutions to remain impartial and not become involved in political disputes.

“While Mr Davids had at the time agreed with this position, the tapes showed that Mr Davids clearly did not think that it was correct for law enforcement institutions to remain impartial.”

Transparency and accountability have lost currency in the treasury, and we are all the poorer for it.
Read more
Africa

Schools have been closed again. After months of doing schoolwork at home, not all parents think their children are ready to move to the next grade
Read more
Advertising
Continue to the category
Education