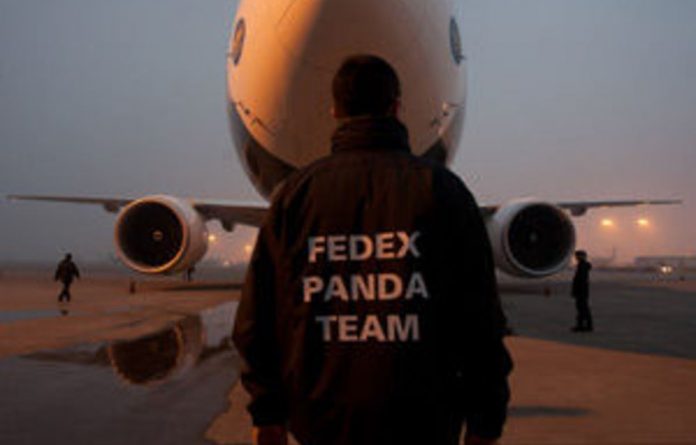 Two Chinese pandas landed in Paris on Sunday for a new life in a French zoo in a loan sealed after years of top-level negotiations between China and France.

The “Panda Express”, a Boeing 777 specially decorated with a panda motif, carried the bears from Sichuan province to Charles de Gaulle airport, where China’s ambassador to Paris and zoo staff were on hand to greet them.

Huan Huan (Happy) and Yuan Zi (Chubby) are the first pandas sent to France since 1973, when Yen Yen — who lived until the year 2000 — was given to then president Georges Pompidou along with another panda, which died shortly after arriving.

The latest furry ambassadors, specially selected for their breeding potential by their keepers in the city of Chengdu, are bound for Beauval Zoo in the Loire region of central France for a 10-year stay.

But the French public will have to wait until February 11 to get their first glimpse of the bears in their specially built 2.5 hectare enclosure adorned with Chinese-style pagodas and marble lion statues.

“They enjoyed the trip, they ate a lot. They are starting to learn French and I am sure they will make lots more progress,” joked Chinese ambassador Kong Quan, adding that the bears were a symbol of French-Chinese friendship.

Diplomatic gifts
The three-year-old pandas were provided with toys and 50 kilos of fruit and bamboo to keep them occupied during the 11-hour flight, the transport company said.

A deal on the endangered animals, famous for their reluctance to breed, was to have been announced at the G20 summit in the French resort of Cannes in November, but had to be delayed due to the eurozone crisis.

China is famed for its “panda diplomacy”, using the bears as diplomatic gifts to other countries. Just 1 600 remain in the wild in China, with some 300 others in captivity worldwide — mostly in China.

David Algranti, who was named a “pambassador” in 2010 and spent several weeks as the bears’ official guardian in Chengdu, was one of a handful of people given privileged access to the quarantined pandas.

“France is lucky to be getting these two, they are particularly lovable, and very good-looking”, he said. “Huan Huan sticks out her tongue a lot and Yuan Zi loves to climb, he’s quite sporty.” –AFP