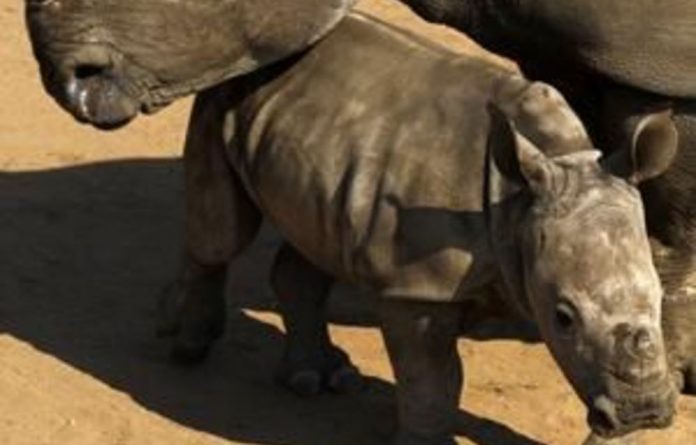 An additional 150 rangers will be deployed to the Kruger National Park in 2012 in a bid to combat rhino poaching, Environmental Affairs Minister Edna Molewa said on Sunday.

Molewa, addressing a National Press Club briefing in Pretoria, said that would add to the existing 500 rangers currently employed in the park.

Molewa’s announcement follows the killing of 11 rhino in the country in 2012 so far.

Two poachers have been killed and another two have been arrested in connection with the rhinos poaching in the Kruger National Park this year.

Fence as early warning system
“This ongoing poaching of our rhino population is a great source of concern to the government.” Some 232 people had been arrested for rhino poaching, Molewa said.

Molewa said her department would meet with the Department of Public Works about re-erecting a 150-kilometre stretch of fence along the border with Mozambique.

SA National Parks (SANparks) chief executive David Mabunda, who was also at the briefing, said the fence, if approved, would cost an estimated R250-million to build.

“We still have a fence or what used to be a fence. That part of the fence is in a bad state of repair,” said Mabunda.

The proposed fence would be electrified, but would not be so strong as to electrocute people who crossed the border. Mabunda said it would operate more as an early warning system.

Mostly Mozambicans
He said most of those caught poaching were Mozambican nationals with some South Africans involved. Very few Zimbabweans were involved in poaching in the Kruger National Park.

He said Mozambicans living across the border of the park were extremely poor and could therefore be enticed by organised crime.

“We need an appropriate organised response.”

Fundisile Mketeni, the Water and Environmental Affairs deputy director general for biodiversity and conservation, said the fact that a recent auction to hunt a rhino in KwaZulu-Natal had raised R950 000 gave an indication of the value attached to rhinos and the associated poaching.

Molewa said she had decided not to effect a “blanket moratorium” on hunting.

Following a recent meeting with provincial environmental MECs, a decision had been made to implement measures, including moratoriums, in “targeted areas, environments and or provinces where such will be necessary”.

South Africa has some 22 000 rhino, which according to Mabunda is about 80% of the world’s rhino population.

Currently, the country’s rhino population, 22% of which is in private hands, was growing. However, he warned that if poaching levels continued to climb, from 2015 South Africa could see a fall in its rhino population.

Education campaigns envisaged
In the 1960s and 1970s Africa’s rhino population was being exterminated at the rate of an estimated 8 000 animals per year.

The horn of rhino is valued for dagger handles in Yemen while in China and Vietnam, it is prized in traditional medicine to treat fevers.

Molewa said she hoped that draft memorandums of understanding on wildlife trafficking would be signed with both Vietnam and China.

She said it was envisaged that both countries would embark on campaigns to educate their populations. –Sapa