At 70, Muhammad Ali is ‘still the greatest’ 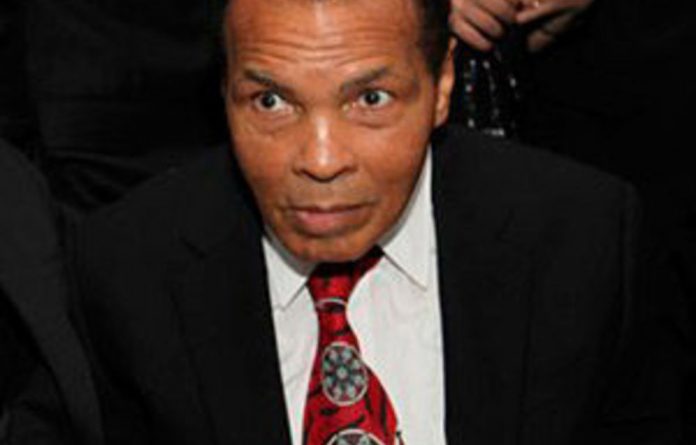 At 70, Muhammad Ali is “still the greatest” to friends and admirers worldwide.

The boxing champ basked in chants of “Ali! Ali!” as hundreds of supporters cheered him on the weekend with a hearty rendering of Happy Birthday during his 70th birthday celebration in his Kentucky hometown. Never mind that Ali actually only turned 70 on Tuesday — the private party in his hometown is the first of five planned in the next few months.

As party-goers mingled in a lobby of the Muhammad Ali Centre before the festivities, Ali walked slowly to a second-floor balcony overlooking them. The crowd immediately began to clap, then broke into effusive chants and singing. The three-time world heavyweight champion, who is battling Parkinson’s disease, leaned against a rail and raised his right hand to wave to the crowd. Then he joined his party out of view of the public and the press.

“I feel so proud and honoured that we’re able to show our feelings and show our support for him,” Lewis said.

Tracing a great career
The guest list numbered 350 for the private party, which doubled as a $1 000-per-person fundraiser for the Ali Centre, a six-year-old cultural and education complex designed to be a legacy to his social activism. The six-storey centre also retraces Ali’s career, including his epic bouts against Joe Frazier, George Foreman and Sonny Liston.

The guest list included Ali’s trainer Angelo Dundee and three American hikers who were imprisoned in Iran. Ali, perhaps the most prominent US Muslim, lobbied for their release. Rocker John Mellencamp headlined the entertainment.

Dundee, who travelled from Clearwater, Florida, for the celebration, said he hears from Ali about once a month.

“We’re like family,” Dundee told the Courier-Journal of Louisville. “We’ve always been family and we’re always going to be family. He’ll say, ‘Angie, I want to come and train. That’s what I miss the most. Being in the gym. Working up a sweat’.”

Guests paid tribute to Ali before filling a banquet hall for a party closed to the public.

“The reason I loved him is because of his confidence,” University of Kentucky men’s basketball coach John Calipari said. “He would talk and then back it up. He had great courage and who had more fun than him?”

His wife Lonnie Ali said recently that the boxing great has mixed feelings about the landmark birthday.

Born Cassius Marcellus Clay Junior on January 17 1942, Ali took up boxing at age 12, when his bike was stolen and he wanted to find and whip the culprit. The boy was introduced to Joe Martin, a police officer who coached boxing at a local gym.

Ali flourished in the ring, becoming a top amateur and Olympic gold medalist. He made his professional debut in Louisville and arranged for a local children’s hospital to receive proceeds from the fight.

Lewis said Ali ranks as the greatest of heavyweights, and he said he was inspired by Ali’s fights.

“I used to get mad if I didn’t see the Ali shuffle,” Lewis said. “So I was always watching him, expecting some type of antic.”

Ali won the heavyweight title in 1964, defeating the heavily favoured Sonny Liston. Soon after, Ali — who was raised in a Baptist family — announced his conversion to Islam and changed his name.

Draft evasion
While in his prime, Ali was stripped of his heavyweight crown in 1967 for refusing to be drafted for military service during the Vietnam War. He cited his religious beliefs as the reason for his refusal.

His decision alienated Ali from many across the US and resulted in a draft-evasion conviction. Ali found himself embroiled in a long legal fight that ended in 1971, when the US Supreme Court ruled in his favour.

Ali lost his first bid to regain the heavyweight crown when Frazier knocked him down and took a decision in the Fight of the Century at Madison Square Gardens in 1971. Ali regained the heavyweight title in 1974, defeating Foreman in the Rumble in the Jungle. A year later, he outlasted Frazier in the epic Thrilla in Manila bout.

Last year, a frail Ali rose from his seat and clapped for his deceased rival at Frazier’s funeral.

Ali’s last title came in 1978 when he defeated Leon Spinks.

Ali retired from boxing in 1981 and devoted himself to social causes. He travelled the world on humanitarian missions. In 2005, he was awarded the Presidential Medal of Freedom. — Sapa-AP