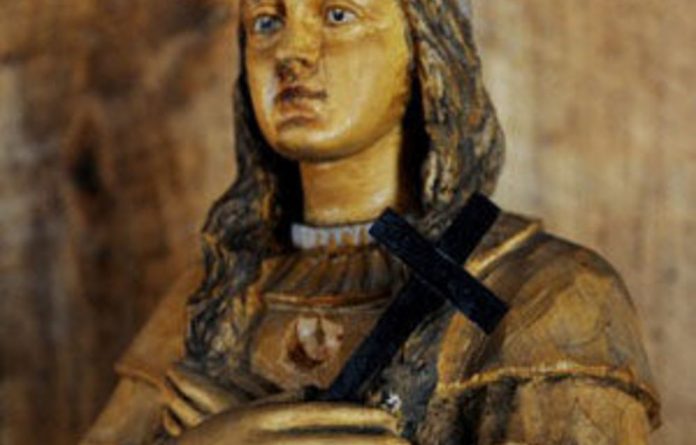 Gazing down a frozen New York field, the statue of a Mohawk girl about to become the first Native American saint exudes calm. Yet the real Kateri Tekakwitha had a brutal existence — and ghosts from her dramatic life still haunt these hills.

The 17th-century figure will make history when the Vatican canonises her later this year, although the joy among America’s indigenous tribes will be mixed with some painful historical memories.

No other “Indian”, as the original inhabitants of the US and Canada are widely, but wrongly, called, has made sainthood. Following centuries of being dispossessed, caricatured or ignored, Native Americans will soon have the unusual experience of appearing in a positive light.

Mark Steed, the Franciscan friar heading the Kateri Shrine on the banks of the Mohawk River, said that after more than 30 years of working among Native Americans, he is happy to see them win this boost.

“They were put down, bypassed,” Friar Mark, a soft-spoken but steely tough 71-year-old, said. “So I think when you have a repressed people, any star in their crown is a plus.”

For many Native Americans, especially among the Mohawk and other Iroquois tribes straddling the US-Canadian border, Kateri’s sainthood was overdue decades ago.

Three miracles
The Vatican needed a certified miracle from the three-centuries-dead tribeswoman and so followers submitted reports of dozens: everything from healing the sick to levitating a man off the ground and appearing herself, hovering in deerskin clothes.

None of these passed muster. But then in 2006 doctors in Seattle confirmed an astonishing event.

Against all medical expectations, an 11-year-old Native American boy — fatally ill with a flesh-eating bacterium — made a full recovery. His parents had been praying to Kateri.

Although needing another five years, this one convinced the Vatican, and last month Pope Benedict XVI cleared Kateri for canonisation.

Her followers may not have a date yet but they are already excited. “It will be a celebration of first magnitude,” proclaims the January issue of the shrine’s Tekakwitha News.

Kateri’s life story encompasses the despair and — for some — the hope sown in those tumultuous early years of the white settlers.

Ostracised
According to Jesuit accounts and oral history, Kateri survived a settler-introduced smallpox epidemic at four but was left orphaned and near-blind. The next calamity was a raid by French settlers and native allies who burned her village to the ground.

Again she survived, spending the next decade in a newly built village across the Mohawk River in the woods near today’s Kateri Shrine. It was here, when she was about 20, that she was baptised and entered the crucial last four years of her life.

Ostracised by her tribe, Kateri — whose native name Tekakwitha translates as “The Clumsy One” — fled to a village of converts in what is now Canada.

Despite being ravaged by illness, she tended to other sick and lived a life of extreme asceticism — including burning herself with hot coals — that attracted admiration from missionaries and converts alike.

Tradition has it that when she died, aged 24, her smallpox-scarred face suddenly cleared.

The dark side of Kateri’s journey
That story still inspires people around Fonda to gather in the shrine’s open-air chapel in summer, or in the 230-year-old wooden barn housing a chapel where a large painting of Kateri hangs behind the altar.

But intertwined is the dark history of European conquest and the role played by Christian conversions.

Tom Porter, who lives a short drive down the road from the Kateri Shrine, believes Kateri unwittingly contributed to the destruction of her people. “She was used,” he said in a rare interview.

Unlike many modern Mohawks who have either converted or are not interested in any religion, Porter works actively to restore the old beliefs.

He lives with family and a handful of followers on a farm where they grow their own crops, raise cattle and use work horses to plough the earth. A long-time Mohawk acting chief, Porter is immersed in the spiritual ways of his forefathers.

Inviting a reporter to join a huge family meal in the compound’s main house, Porter, whose native name is Sakokwenionkwas, or “He Who Wins”, said the moon, the sun and thunder are more important to the Iroquois than saints or popes.

Cruel policies
“Christianity is not a shoe that will ever fit. Not for my feet, or my heart, or my soul,” he said.

A humorous man, Porter carries echoes in his face of the proud, eagle-like features seen in old pictures of tribesmen. But he could not conceal his bitterness.

To him, there is no difference between the spread of Christianity and the cruel policies, including forced assimilation in grim 20th century government boarding schools that were used to subjugate Native Americans.

Aged 67, Porter has made sure every one of his five daughters, one son, and 11 grandchildren follows the traditional ways.

He thinks Kateri was probably forced to become a Catholic. “I don’t know if she really was a Christian or not,” he said. “They were in poverty at that time. The Europeans had destroyed everything, people were destitute and starving, and if you wanted to get help of any kind you had to be a Christian.”

Porter conceded that few Mohawk agree with him. He even admitted that some in his extended family are devoted to Kateri.

‘Terrible’ sins
“It breaks my heart,” he said.

Friar Mark acknowledged that there had been “terrible” sins and was determined to heal the wounds.

In the wooden chapel at the Kateri Shrine, a native blanket covers the altar. Snowshoes and deerskins hang from the rafters and sacred herbs like tobacco and sage lie drying.

There’s a crucifix, of course, but also a picture of the tree and turtle at the centre of the Native American creation legend.

Soon after taking up his position in Fonda a year ago, the tall Canadian friar went to call on Porter. “He was amazed,” Friar Mark recalled.

Since then, the two have met often and while they don’t agree, they listen to one another, an odd couple making peace on the spot where a future saint once lived.

“He’s a friend,” Porter said of Friar Mark. “When I was growing up, there was no one who hated priests and nuns more than I did. But I got over that now. All my enemies — they became my good friends.” — AFP