Cruise captain in the dock as hopes for missing passengers fade 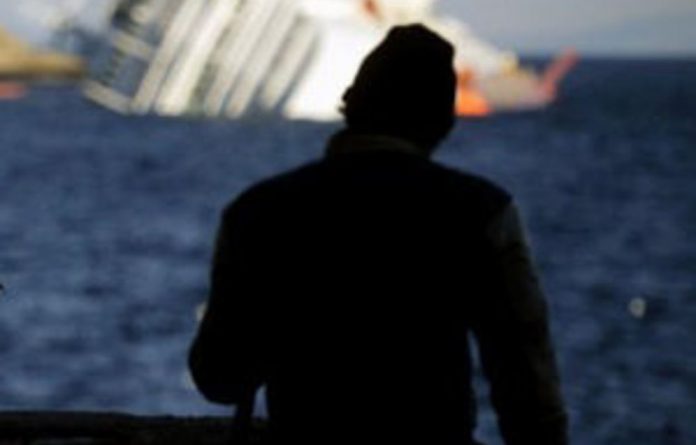 Hopes began to fade for 29 people still unaccounted for from the wreck of a luxury liner off the coast of Italy on Tuesday as a judge questioned the captain over his role in the disaster.

A black box transcript showed Francesco Schettino — reported to have sailed so close to the shore only to please a local crew member — ignored a port official’s order to return on deck after abandoning his ship.

The coast guard said six bodies had been found so far, denying a report in an Italian newspaper that a seventh body had been identified.

Those unaccounted for include 14 Germans, six Italians, four French, two Americans, one Hungarian, one Indian and one Peruvian, the coast guard said.

“We are continuing the search operation,” said Filippo Marini, a spokesperson for the coast guard, four days after the Mediterranean tragedy. “The ship at the moment is stable and we are being helped by the weather,” he said, a day after rescuers had to be evacuated due to choppy seas.

As fears rose of an environmental disaster if the ship’s tanks filled with 2 380 tonnes of fuel rupture and leak, Marini said emergency crews had laid down absorbent booms after noticing “an iridescence” in the water.

The Costa Concordia late on Friday came to grief off the picturesque island of Giglio in Tuscany — a marine sanctuary and popular holiday spot.

Three victims — two French passengers and one Peruvian crew member — drowned after jumping into the chilly waters to escape.

‘Disastrous’
Rodolfo Raiteri, head of the coastguard service’s diving team, said on Monday: “The conditions inside are disastrous. It’s very difficult. The corridors are cluttered and it’s hard for the divers to swim through.”

The navy used small explosives to blow holes in keel early on Tuesday to give rescue teams greater underwater access to the submerged areas of the ship.

The weather forced a temporary evacuation of the stricken 17-deck cruise ship for several hours on Monday after it slipped on a rocky shelf under the sea, sparking fears that the hulk could sink entirely.

Current forecasts say a storm is expected to lash the island on Thursday.

Giglio mayor Sergio Ortelli warned that the stricken vessel, which hit submerged rocks and keeled over, was an “ecological timebomb”.

The head of the company that owns the vessel said it had hit a rock as a result of an “inexplicable” error by the captain, arrested on Saturday along with first officer Ciro Ambrosio.

“He carried out a manoeuvre which had not been approved by us and we disassociate ourselves from such behaviour,” said Pier Luigi Foschi, the boss of Costa Crociere, Europe’s largest cruise operator.

Italian prosecutors accuse Schettino and Ambrosio of multiple manslaughter and abandoning ship before all the passengers were rescued.

As the darkened vessel began to tilt, the crew waited in vain for the order to abandon ship before initiating the evacuation procedure themselves — 15 minutes before Schettino eventually gave the command, Italian press reported.

A transcript of a conversation between Schettino and a port official was released Monday showing that the captain later refused to return to the ship.

Too close to shore
“You must tell us how many people, children, women and passengers are there and the exact number of each category,” the official tells Schettino, according to the transcript of the conversation on one of the ship’s “black boxes”.

“What are you doing? Are you abandoning the rescue?” the official says.

The Costa Concordia was carrying more than 4 200 people when it ran aground shortly after starting a seven-day Mediterranean cruise on its way to Marseille in France and Barcelona in Spain, just as many passengers were having dinner.

Island residents have already said the ship was sailing far too close to Giglio and had hit a reef known as the School Rocks, well known to inhabitants.

The Corriere della Sera reported Monday that the captain had passed close to the island’s rocky shores to please the head waiter who comes from Giglio.

It also quoted witnesses as claiming the waiter had warned Schettino just before the accident happened: “Careful, we are extremely close to the shore.”

Local officials are calling for strict curbs in the future on shipping routes in an area of outstanding natural beauty and the government is expected to declare a state of emergency in the area later this week.

A Dutch company specialising in salvage operations, Smit, was also to begin pumping out the fuel this week. Officials said the ship itself could then be taken off Giglio in an unprecedented operation using massive floating devices.

Smit’s parent company, Royal Boskalis Westminster, said it would take “at least three weeks” for the fuel to be pumped out of the wreck.

Passengers have described confusion on board as the lights went out and how they were at first told it was just an electrical fault — before the ship lurched sharply on to its side and panic set in.

Rose Metcalf, a 23-year-old crew member, wiped away tears as she told how she wrote a note to her mother in case she did not survive.

“There was absolute panic. It was just terrifying, I was just trying to keep people calm. People were white, people were crying, screaming,” she told BBC television on her return to England.

Ennio Aquilino, a fire brigade chief who was one of the first on the scene and still bore the scars from a fall during the rescue operation as he saved a French woman, said it had been “an apocalyptic scene.” — AFP