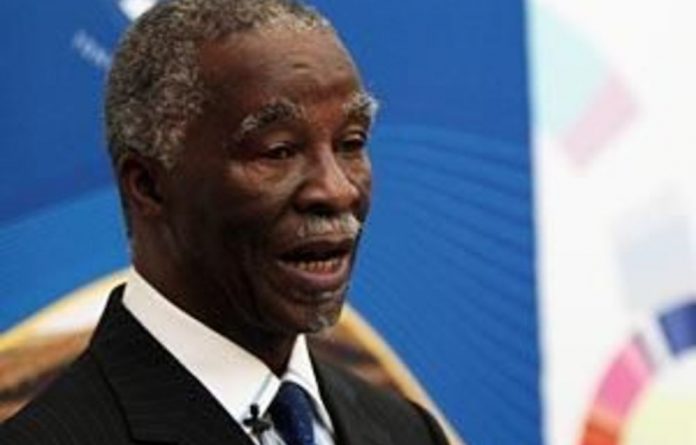 Former president Thabo Mbeki said on Monday he was sceptical about Twitter being a great conveyor of reliable knowledge.

Mbeki said in response to a question after a speech to the University of Stellenbosch Business School he thought the social media tool was not appropriate for discussing knowledge meant for the betterment of society.

“I am sceptical about this notion of Twitter being that great conveyor instrument for the democratisation of knowledge,” Mbeki said at the start of the school’s knowledge conference.

“If you want to discuss knowledge which has got to do with the betterment of society I don’t think it is appropriate … Even the internet in general, blogging and so on, is not the place where you can — put all these things under theories.”

In his speech Mbeki questioned whether knowledge had become “less democratised and more compromised” as an instrument for the improvement of society. He said traditional media institutions were unable to control which political rhetoric “caught fire” with the public.

It was difficult to investigate claims and counter-claims, he said. The conference should look into how false knowledge was “advanced” by groups with agendas.

“False knowledge was advanced that the Gaddafi regime was about to slaughter millions of civilians,” he said.

“This was to justify the imposition of a no-fly zone over Libya which served as a cover to overthrow the Libyan government and impose a regime approved by the Western powers in their interest.”

The Council of Europe had also asserted that “false knowledge” was propagated about a swine flue epidemic in 2009 to benefit highly profitable pharmaceutical companies.

“It becomes a very important vehicle for the conveyance of that knowledge,” he said.

“Particularly [where] readers seem to have sufficient confidence in the media, so they think if it comes from newspaper it is true … Thabo Mbeki stole half a dozen eggs from supermarket. Therefore it is true because it comes from the newspaper.” — Sapa

Accountability, insofar as it ever existed in the South African Police Service, has been reduced to a theoretical concept. It is time this changed.
Friday