Jo’burg sends in Red Ants in defiance of ConCourt 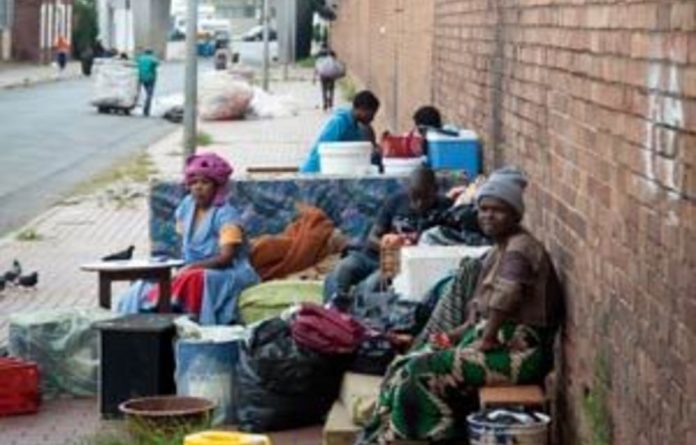 Illegal occupiers of private properties are still being evicted without the promise of alternative accommodation despite a landmark Constitutional Court decision that holds municipalities responsible for ensuring they are not left on the streets.

In December last year, the Constitutional Court ruled that when the unlawful occupiers of a private property are evicted, the city is obliged to provide temporary emergency accommodation.

Despite the ruling made in the so-called Blue Moonlight case, residents of a the “New Doornfontein” Chambers building in Van Bleek Street, Johannesburg, on Wednesday found themselves out on the street with no prospect of alternative accommodation.

About 100 people were left standing in the street, holding onto the few belongings they’d managed to grab during an eviction allegedly carried out by the Red Ants.

Osmond Mngomezulu, a lawyer for the Socio-Economic Rights Institute, said that as a result of the Blue Moonlight case, there is an obligation on the city to provide alternative accommodation to those evicted. “It applies to the poorest of the poor, those who would become homeless if evicted,” he said.

That seems to be the case with many of the people evicted from the building on Wednesday yet it is unclear why the city did not come forward to help the residents.

Tentative agreement
Renney Plit, chief operating officer of Afhco, the company which owned the building — referred to as both Platinum Mile and “New Doornfontein” Chambers — said the eviction came after a six-year legal battle.

Court documents show that the eviction was approved by the high court in August last year. There was a tentative agreement with residents that they would leave by December, he said, and some of the blind residents, who were living in the building, were helped with finding alternative accommodation. But others refused to move and, according to Plit, notices were posted informing residents of the impending eviction, which was carried out on Wednesday morning on the orders of the sheriff of the court.

Some of the people evicted told the Mail & Guardian they knew the eviction was pending, while others claim they were never informed about it.

Oteka Khuzwayo, one of the people evicted from the building, said he heard about the eviction by happenstance. “Around 4 o’clock I heard someone say they saw Red Ants coming into the flat [then] around six o’clock they just kicked in our door and entered. We didn’t even get a chance to take our property. I just took the clothes I am wearing, my son and my wife. My other things, I left inside,” he said.

Khuzwayo said he had been living in the building for over 10 years. In addition to his possessions, he also lost his money and his identity documents, a complaint echoed by others who had been evicted.

Médecins Sans Frontières (MSF), which has done work providing healthcare to residents in many of the city’s hijacked buildings, was on the scene following the eviction. The organisation said it would provide medical assistance to those who needed it and distribute blankets to the residents, many of whom spent the night on the street.

‘Inhumane’
Jens Pederson, project coordinator for MSF in Johannesburg, said putting vulnerable people on the street was inhumane. Among the displaced were children and people with chronic conditions such as TB, asthma and hypertension.

“We are concerned when people are abruptly evicted without the opportunity to remove their belongings, which includes medications,” he said. “There are people with chronic conditions who have now lost their medication.”

Matthew Wilhelm-Solomon, a researcher with the African Centre for Migration and Society, who has done research into the many hijacked buildings in the city centre, said it’s likely that many of the people evicted on Wednesday would simply move into other illegal buildings. “The cycle will just continue,” he said.

Wilhelm-Solomon said there’s a chronic lack of affordable accommodation in the inner city for the “lowest rung” of people in the city, those working in the informal economy or begging.

“Even in affordable housing, the basic minimum you could [pay for] a very simple room in a warehouse in this area is around R1 000 and that’s more than many families can afford,” he said.

“There really needs to be affordable, formal accommodation at a lower cost which may take government subsidies. These are complex issues that take a long time [to solve].”

The City of Johannesburg could not be reached for comment by the time this story was published.