Mbongeni Ngema: Lion of the stage 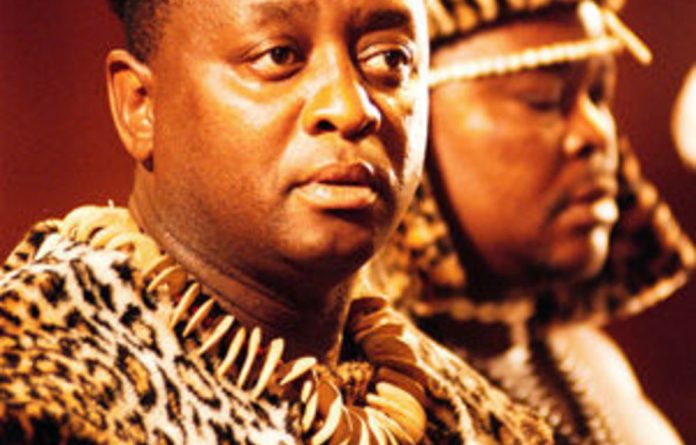 Since making his indelible mark on the history of South African theatre with Woza Albert!, a play that has become a potent symbol of the struggle era, Mbongeni Ngema has become a controversial figure.

Huge budgets afforded by the government for his more recent productions, his close relationship with the ANC, and various questionable lyrics are at the centre of the storm.

How did a man who founded his career on fighting the status quo, become one of the government’s best friends? Was it inevitable after a change of regime? Or, as many have suggested throughout the years, has Ngema abandoned his ideals and artistic integrity? As eThekwini Democratic Alliance councillor John Steenhuisen told the M&G during Ngema’s most recent controversy, “I don’t know of any other artist who has managed to get so much money from government.”

A look at his career reveals his rise to commercial success, and fall from critical acclaim.

1981: Mbongeni Ngema collaborates with Barney Simon and Percy Mtwa to create Woza Albert!, a landmark production in the history of South African theatre. The play explores the second coming of Christ, and what would happen if this took place in apartheid South Africa. The play features only two actors (Ngema and Mtwa in the original production), who use physical theatre and minimal props to portray all the characters in the piece, and uses humour as a tool to highlight the brutality of the state.

The Market Theatre’s artistic director, Malcolm Purkey, tells us about the new theatre season, which includes historical protest plays Woza Albert! and Somewhere Along the Border. He discusses how and why these plays continue to resonate today.

Despite its content, the play was not banned as many other works were. The play would go on to become one of SA’s most internationally-acclaimed works, with regular revivals of the piece taking place both locally and abroad.

1987: Ngema writes and directs Asinimali! (We have no money), a larger-scale work that incorporated music and dance into a drama about life in Lamontville township near Durban. The piece looks at events that led to a mass strike over municipal services, and continued Ngema’s focus on injustice in society. Like Woza Albert!, Asinimali! debuted at the Market Theatre before appearing on European and American stages to critical acclaim. A New York Times review of the original touring production called it a “stunningly performed tapestry of satire, tragedy and reportage from the land of apartheid” and a powerful example of political theatre.

Sarafina!, a musical about the 1978 Soweto uprising, also debuted in 1987 and its Broadway run received several Tony Award nominations, including best director for Ngema. Leleti Khumalo (who would later marry Ngema) won the award for best actress. The multi-million dollar production was funded by the Lincoln Centre in New York, where Asinimali! had played to rave reviews. The show has been criticised for pandering to its American audience, and promoting a stereoptypical view of township life. In a 1996 article, Mark Gevisser writes: “The pastiche of political anger and comic burlesque, fused into a form of struggle-minstrelsy, has become the almost inescapable formula for how to make black South African theatre: liberating in the possibilities of success it presents, oppressive in the limitations of style it imposes.”

Gevisser also suggested that Ngema has been using the Sarafina! formula in all subsequent productions. Ngema responded: “Yes, my musicals do work to a formula, but it’s a formula I like. And more important, a formula the people like.”

1992: Ngema makes the move from theatre, with its limited audience, to the big screen. With financial support from international film funds, Sarafina! was adapted into a film starring Whoopi Goldberg and Khumalo, and directed by acclaimed South African director Darrell Roodt. It showed at the 1992 Cannes Film Festival but was not a commercial success, locally or internationally. Despite this, it brought mainstream attention to Ngema.

1996: It was with the musical Sarafina! 2 that Ngema, now creative director of Durban’s Playhouse, became a household name. It was his fourth government-funded production at the helm of the once white-run institution. He described himself in a BBC interview as “NOT one of South Africa’s most famous producers, THE most famous producer.”

The musical, commissioned by Nkosazana Dlamini-Zuma, former minister of health, as an exercise in Aids awareness and as an educational tool, was given a budget of R14-million. As Gevisser wrote in his profile of the director, the budget was equal to one fifth of the annual Aids budget, and the entire Aids budget of KwaZulu-Natal. Criticism of the way the budget was spent was immediate. In the same interview with Gevisser, Ngema defended the exorbitant salaries of those involved in the production. “I’m not prepared to do a second-class production. Why should whites get state-funded first-class productions in the State Theatre, while blacks in the townships get flatbed trucks? No. Blacks deserve Broadway standards.”

About his own R300 000 fee, unheard of in the world of South African theatre, he said “I don’t think you can compare me to anyone in this country “.

Questions were also raised about the director’s ability to create an educational piece, while critics sited rumours about Ngema’s own sexual behaviour.

Despite its huge budget and publicity, Sarafina! 2 was neither a critical nor commercial success. The public protector later found that the project lacked proper approval from the state tender board. Natal Witness journalist Yves Vanderhaegen summed up the controversy, and the perceived arrogance of Ngema in his trying to justify the costs: “Ruling by numbers means never having to say Sorryfina”.

2002: Ngema made the headlines again, this time for his song AmaNdiya (the Indians), for which he is accused of racism. The song includes the lyrics (in Zulu): “Indians don’t want to change, even Mandela has failed to convince them. It was better with whites we knew then it was a racial conflict.”

The Broadcasting Complaints Commission of South Africa deemed the song to be “racial hate speech with incitement to harm”, and banned it from the airwaves. Fatima Meer described the song as “a disgusting bit of diatribe”, and said that Ngema has wiped out “whatever glory” he had earned in his career. Even former president Nelson Mandela entered the fray, demanding that Ngema apologise to the Indian community. His response to the ban did little to heal his public image. “By their action he feels that they have declared war against the African race.”

2008: Ngema was awarded another huge budget, this time for Lion of the East: Gert Sibande and the Potato Boycott.. The Mpumalanga provincial government, who awarded the R22-million contract, defended their decision, suggesting that the work would be “a huge springboard for local theatre talent”, and an important tool for remembering South African history and culture.

Bernard Jay, chief executive officer of the Johannesburg Civic Theatre, told the M&G that R22-million “must be a record for a single South African theatre production. I have never seen a budget that big for one show in this country.” National Arts Festival chief executive, Ismail Mahomed, said that at the time the National Arts Festival in Grahamstown had an annual budget of R18-million.

So what did audiences get for R22-million? According to some critics, they were shown a piece of political propaganda, one that included the lyrics, “The ANC will come to save the people from the white man’s rule.”

If the original figure was not enough to raise eyebrows, Ngema was awarded a further R2.9-million when the production moved to the Playhouse in Durban.

Ngema told the M&G that he is popular with the ANC government because of his political work and that he comes with a “guarantee of world class standards”. At world class prices too, it seems.