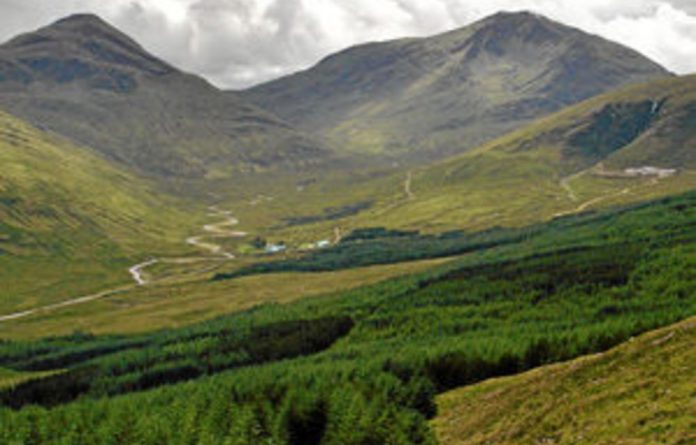 In a significant reversal of the colonial economic process, a new gold mine opening in the middle of the United Kingdom is owned by an Australian company and the technology and expertise to process the ore will be imported from South Africa.

It may be a small deal in the world of mining but the $10-million gold extraction plant, which will be designed and built by Johannesburg-based Consulmet Metals, casts the spotlight on South Africa’s readiness to capitalise on local mining expertise, one of the country’s few competitive advantages.

Operations are due to start next year at the new Cononish gold mine just inside a national park on the Grampian highlands of midwestern Scotland after Australian firm Scotgold Resources gained approval for the mine late last year from environmental authorities. About 72 000 tonnes of ore is expected to be extracted annually, producing an estimated 21000 ounces of gold and 83 000 ounces of silver a year.

The gold deposits in a quartz vein were discovered there in the mid-1980s but were never mined because of the low gold price at the time. At current prices the operation is expected to contribute £80-million pounds to the Scottish economy.

South Africa’s economy stands to benefit from Scotgold’s order of a turnkey ore-processing plant, which will be designed to comply with the mine’s strict environmental requirements. Consulmet Metals, a three-year-old, 18-man engineering firm in Johannesburg, will design the plant, have it built locally, partially disassemble it before shipment, and commission it at the mine near Loch Lomond in Scotland.

Consulmet Metals chief executive Rupert Swanepoel said extensive South African mining expertise made it a natural place to shop for ore processing equipment, which had to be custom-made to suit a mine’s specific ore quality.

Extensive mining opportunities opening up in Africa have deepened the experience of local engineering houses such as Consulmet Metals in building ready-to-use processing plants in hostile terrain. This, and an emotional preference to do business with fellow Africans, ensures that South Africa will benefit from the African mining boom in particular.

However, the South African skills diaspora is endangering the opportunity.

“There is no doubt that the brain drain has hurt [the local engineering industry] very badly. We’ve lost at least half of our best engineers to places like Australia,” said Swanepoel.

A small consolation may nevertheless lie in the internationalisation of the South African network. Consulmet Metals landed the order from Scotgold through its employment of a South African living in Perth.

Rhomberg estimated that, had Consulmet Metals used the corporation’s facilities in the past, the company could have been doing twice its current R40-million a year by now. And if knowledge of the guarantee was more widespread among local merchant banks and exporters, the corporation could easily triple its current exposure to R13-billion worth of export deals.

The corporation offered overseas buyers of South African goods and services subsidised finance by guaranteeing medium- to long-term loans to the buyer against political and non-payment risk. This enticed banks to lend to the buyer, which used the finance to pay the local exporter upfront and repayed the bank over periods ranging from two to 20 years, she said.

The long-term nature of the finance made it ideal for the purchase of capital equipment and infrastructure projects.

The exporting of fast-moving consumer goods tended to be financed through shorter-term instruments, such as letters of credit, and were usually guaranteed by the corporation’s private-sector counterparts, such as the Credit Guarantee Insurance Corporation, she said.

The Export Credit Insurance Corporation guaranteed finance was offered to overseas buyers at the London interbank transfer rate plus 2.5%. Local banks, which were used to a higher yield, could then apply to top up the interest rate through an “interest make-up scheme” from the South African treasury.

Rhomberg said that, apart from causing some confusion among bankers, the interest make-up scheme did not seem to be enough of an incentive, because banks could still make more money from more traditional ways of export finance, such as letters of credit.

“Unless an exporter knows about [the corporation] the banks won’t offer it as an option.”

Mandisi Nkuhlu, chief operating officer of the corporation, acknowledged that his organisation was “not the most well known” of government assistance schemes, partly because it was generally seen as an “insurer of last resort”.

But the organisation was due to embark on publicity campaigns targeted at exporters and banks, and it would then be up to South African exporters to market the cheap finance to their clients overseas as part of their bids.

Nkuhlu said the corporation would also launch a guarantee product aimed at small to medium deals, in which 100% of the transaction value would be guaranteed, as opposed to the current 85%.

Swanepoel said the Scotgold project was the first in which Consulmet Metals would be making use of the corporation as a way of sweetening its offering to overseas clients, and will almost certainly be using the scheme in future deals, especially in Africa.