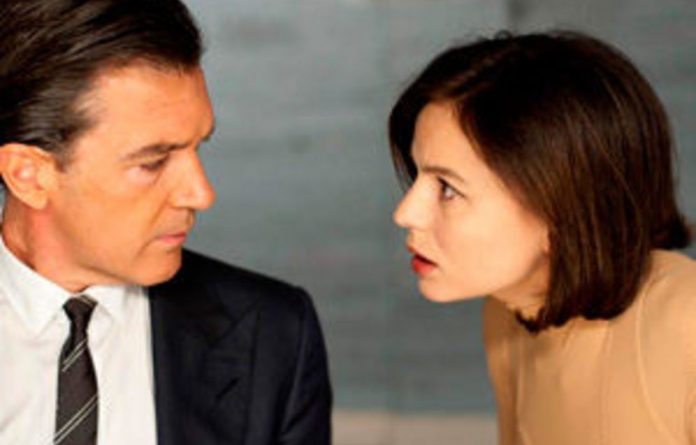 Sexuality and the prison house of the self are the themes of The Skin I Live In, Pedro Almodóvar’s fantastically twisted new film, a luxury pulp fiction that breathes the atmosphere of the sickroom.

Antonio Banderas stars as Ledgard, a wealthy and brilliant plastic surgeon who, in his palatial home (tastefully furnished and equipped with its own private operating theatre), is secretly experimenting on the beautiful and submissive young Vera (Elena Anaya).

He is replacing Vera’s entire skin covering with an eerily smooth artificial substance, transgenically derived from pig hide. Is the prisoner his long-lost beloved wife, widely thought to have died of burns in a recent car crash? Or someone else entirely, whom he is surgically refashioning to resemble her? Either way, captor and captive appear to be in love. Yet it is a relationship that can only end as it began: in violence.

Nightmare melodrama
This is a truly macabre suspense thriller and a nightmare melodrama clotted and tangled with a bizarre backstory; it’s a body horror comedy of the kind that only Almodóvar would know how, or indeed wish, to create.

When I first saw this in Cannes last year, its resemblances to Hitchcock, Franju and Buñuel were apparent. Alejandro Amenábar’s 1997 movie Open Your Eyes could also be an influence, though Almodóvar might not care to acknowledge a younger contemporary.

The film’s storyline, together with the return of Banderas to the Almodóvar repertory company, must also bring to mind his 1990 film Tie Me Up! Tie Me Down!, which sports with the same Stockholm-syndrome ideas of love, violence and imprisonment, still as provocative and non-PC.

The Skin I Live In is freely adapted from the novel Tarantula by Thierry Jonquet, and the movie toys with literary reference. Vera reads widely in the upstairs bedroom-jail cell in Ledgard’s house, displaying great taste, being evidently an admirer of Alice Munro. In my original review I wondered whether Almodóvar might have taken some inspiration from Evelyn Waugh’s 1953 novella Love among the Ruins.

On this second viewing, I felt that Gore Vidal is maybe the better comparison, and the fanatical, passionate care with which Ledgard repairs damaged flesh mirrors the catastrophe connoisseurship displayed in JG Ballard’s Crash.

Self-consciously cinematic
Allusions to books are probably beside the point, though. This is a film drenched in visual and self-consciously cinematic rapture. As in earlier films by this director, there are crazed, voyeuristic scenes in which the protagonist watches action unfolding on a cinema screen, a home-entertainment system that is more torture than entertainment, but which holds him speechless, captivated by the obscene spectacle he himself has created.

A second viewing, in fact, frees the viewer from the task of untangling the ridiculous plot, and allows you just to savour the extraordinary texture of this film: the colours and surfaces contrived by Almodóvar with cinematographer José Luis Alcaine and art director Carlos Bodelón are delectable. The most casual scene or establishing shot looks as if it has been hand-painted in the subtlest detail. This is epitomised by Vera’s remarkable ersatz skin, or super-skin. Did Almodóvar varnish it digitally? It is rich, creamy, without the pink quality of normal flesh, more pale ochre; it bears the same relationship to skin as Astroturf does to grass. It does not respond to a blowtorch and looks tougher than polyurethane.

What a contrast to the plausibly weather-beaten handsomeness of Ledgard’s middle-aged skin or indeed that of his mother Marilia (Marisa Paredes), whose perennially stricken, horrified face both exemplifies and ironises the effect this grotesque tale must have on any sane observer.

The colours, particularly the colour red, loom almost woozily out of the screen — here’s a movie that doesn’t need 3D — and at these moments the film is particularly Hitchcockian, a visual effect intensified by the pulsing orchestral score. The music surges and throbs, the surgical instruments and phials of blood are shown with minute care, revolvers are casually disclosed in handbags and desk drawers, and Almodóvar unveils some terrific overhead shots of crime-scene tableaux.

As elegant as a vampire
Banderas is a wonderfully charismatic leading man; Almodóvar has found in him what Hitchcock found in Cary Grant. He is stylish, debonair, but with a chilling touch of determination and menace. Marilia says that at an earlier, troubled time in their lives, she and her son could only come out at night. Banderas’s Ledgard is, to quote the old expression from Central Europe, as elegant as a vampire.

There will be some who find this film rather too absurd, with a whiff of shaggy dog, and some critics have found it essentially heartless. I would agree that it might not have the passion and empathy of, say, Volver, perhaps because women are sidelined. It is rather a tissue of surfaces, styles and images. That tissue gives a gorgeous caress. —