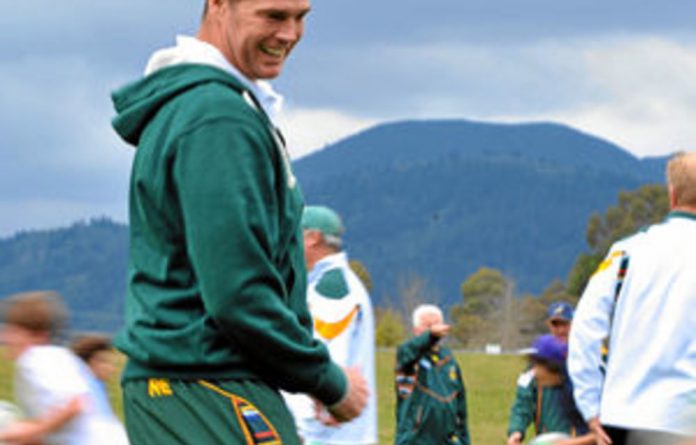 Keegan Daniel has been named as Sharks captain, a role he performed well in Currie Cup rugby last season, whereas Pierre Spies inherits the armband for the Bulls. The Lions deny that they are in imminent danger of being liquidated, the Cheetahs expect the worst and hope for the best, and the Stormers have the task of leading the South African challenge in the competition.

It seems that Stormers coach Allister Coetzee expects to remain in his job for the foreseeable future, despite the fact that, late last year, he was regarded as the favourite to replace Peter de Villiers as Springbok coach. Coetzee’s team was bundled out of the 2011 title race by the Crusaders in a semifinal at Newlands in Cape Town and his task is to bring greater consistency to the squad from day to day.

This is complicated by the departure of Erasmus, a wise head who had finally had enough of boardroom politics at Newlands. Early rumours suggested that he had been made an offer he could not refuse by an overseas union, but it seems that the column inches devoted to his resignation were a clever marketing ploy by the former Springbok flanker. Thanks to the media, Erasmus has now been linked with most of the elite rugby clubs in Europe as well as the head coaching role with England and a newly created oversight role with the Springboks.

Coetzee is more than capable of piloting the ship with the help of his two principal assistants, Matthew Proudfoot (forwards) and Robbie Fleck (backs). The issues will be centred on player depth, because a number of bright young stars have departed for other unions.

The Bulls have secured the best of them in centre Johann Sadie and wing JJ Engelbrecht.

Tim Whitehead has joined the Sharks, but the keenest loss is that of Jacque Fourie, who has moved to Japan to play for the Panasonic Wild Knights.

Jacques Fourie’s record contract could set a precedent
Fourie’s record contract could be the harbinger of a change in the way rugby players earn their living at the highest level. The global season is now irrevocably tied to the World Cup and elite players who are still in their prime can therefore choose to take two years off to earn money away from their home nation and return in time to compete for a national spot ahead of the next cup.

It is a calculated gamble, of course. The best players can lose form, pick up injuries or simply drop beneath the national selectors’ radar while overseas. It might be argued, however, that the same is true of those who choose to remain at home. There is no guarantee of selection and players and their ever-hungry agents will therefore spend the years between World Cups looking for as much as they can get. For once, it is hard to criticise them.

Fourie has gone in the prime of his remarkable career, but several World Cup-winning Boks have joined the overseas pension scheme. John Smit, Fourie du Preez and Danie Rossouw will not play for the Springboks again and their unions must learn to live without them. Victor Matfield has retired, but he is back at Loftus in a coaching role and has also joined Supersport.

It was said at the time, but is no less relevant now, that the side that went to the World Cup was wrongly retained through thick and thin. With the quarterfinal departure in New Zealand to the fore, Springbok planning must perforce look at the young talent coming through.

For once we have flyhalves aplenty: Elton Jantjies at the Lions, Pat Lambie at the Sharks and Johan Goosen at the Cheetahs can all play, whereas Morné Steyn at the Bulls and Peter Grant at the Stormers offer significant experience in the crucial pivot role.

There are, in fact, good young players in almost every position, with the possible exception of lock. The injury that kept Andries Bekker out of the World Cup will probably make him unavailable for the first few rounds of Super Rugby. Matfield and Bakkies Botha have been relegated to the record books and their understudies at the Bulls do not seem to have the combination of magic and grunt required for the position.

But the bonus of having a Super Rugby competition at the beginning of the season is that it provides a weekly dress rehearsal for the selectors to watch. Be certain that there will be options aplenty by the time May rolls around and the new Springbok coach (his announcement is due on January 27) has to select his first squad.

It should also be remembered that similar forces are at play in both New Zealand and Australia, with stalwarts retiring or moving on and new horizons looming for a few wet-behind-the-ears hopefuls. The year after a World Cup is a learning curve for all concerned and there is no reason to suppose that it will be steeper in any one of the three South Africa, New Zealand and Australia rugby unions.

Will Boks be lambs to the slaughter?