Back off, Zuma warns critics 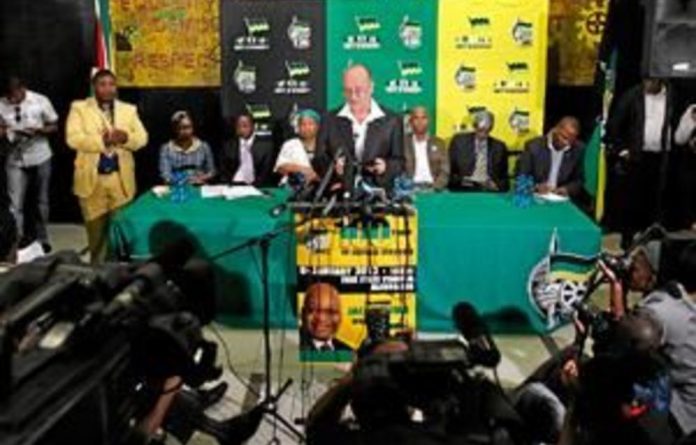 President Jacob Zuma warned his detractors that they would have no future in the ANC if they were ill-disciplined, according to reports.

Zuma, who was addressing the provincial African National Congress centenary celebrations in East London on Saturday, also took a swipe at those “who defend wrongdoing” within the party, the Sunday Times reported.

“We must reach a point where discipline is exercised irrespective of the position you hold… this thing must end where if one comrade is doing wrong things, there are comrades who defend him,” Zuma was quoted as saying.

This came a week after ANC treasurer Mathews Phosa broke ranks on the ANC Youth League’s disciplinary issues while addressing a centenary rally in Sekhukhune.

He said the ANC was “no dustbin for comrades”.

According to the report Zuma said discipline was central to the ruling party’s growth.

“Let’s not destroy this organisation of [Johan] Dube, [Oliver] Tambo and [Nelson] Mandela. You can’t be bigger than them.”

He warned that those who did not understand the ANC would soon find themselves outside the party, the Sunday Times reported.

Tension between factions
Tension between the pro-Zuma faction and those calling for his removal as ANC president intensified this week ahead of the crucial appeal hearing of suspended ANCYL president Julius Malema and his officials, the Mail & Guardian reported on Friday.

With just 10 months before the ANC’s watershed elective conference in Mangaung both factions were trying to gain the high ground this week, with ANC secretary general Gwede Mantashe lashing out at treasurer general Mathews Phosa for questioning the decision to suspend Malema and Cabinet’s decision to place five Limpopo provincial departments under administration.

The league has hit back at Mantashe, accusing him and Zuma in a confidential letter seen by the Mail & Guardian of inconsistency in applying issues of discipline in the organisation.

The split also played itself out in Cabinet, with critics of the President saying he was allowing the government tail to wag the ANC dog and dictate policy to Luthuli House. This relates to Zuma’s decision to break with tradition by convening a Cabinet lekgotla before the ANC’s extended national executive committee (NEC) lekgotla.

“Traditionally, the January 8 statement is a policy statement,” said a senior ANC and government official who asked not to be named. “From there, you deduce programmatic areas for the ANC lekgotla, which allows everyone outside the NEC [including alliance partners] to attend. The ANC lekgotla would then produce a document which would be discussed by a Cabinet lekgotla in preparation for the state of the nation address.”

Approached for comment, Mantashe said it was agreed last year to move the party’s annual lekgotla from January to July in order to feed into Finance Minister Pravin Gordhan’s budgetary planning cycle when he formulates the medium-term expenditure framework in October.

“The discussions that took place at this week’s Cabinet lekgotla will be discussed at the NEC in February in preparation for the state of the nation address and there is nothing unusual about that,” said Mantashe.

Deteriorating relationships
Relations between the youth league and its mother body have deteriorated since Luthuli House’s decision to charge Malema and his cohorts with bringing the ANC into disrepute and sowing divisions in its ranks.

The league’s leaders believe they are being targeted because they support Motlanthe and ANC head of campaigns Fikile Mbalula to replace Zuma and Mantashe as president and secretary general respectively in Mangaung later this year.

The Zuma faction in KwaZulu-Natal circulated the names of preferred candidates for the top six positions. The names include Zuma for president, SACP boss Blade Nzimande for deputy president, Police Minister Nathi Mthethwa for secretary general and Mantashe for chairman.

On Tuesday Mantashe fired the first salvo when he accused Phosa of stepping out of line and contradicting the ANC’s collective decisions and policies.

Addressing a rally in Limpopo last weekend to celebrate the ANC’s centenary Phosa was quoted as saying: “I know Juju [Malema] is worried [about the disciplinary appeal hearing], but I want to assure him that the ANC has no dustbin for comrades. If comrades make mistakes, we find a mechanism to address them.”

Phosa also accused the Cabinet of usurping Limpopo Premier Cassel Mathale’s powers when it decided to place five departments under administration for allegedly failing to pay service providers last year. Limpopo is widely seen as a launch pad for the campaign to oust Mantashe and Zuma.

Said Mantashe: “As officials, we agreed on the need to uphold the responsibility of investing in the unity of this organisation. We further agreed that this would be achieved with the leadership of the ANC not sending different messages to the public. This we view as not suppression of views, but a leadership responsibility of communicating consistent messages at all times.

“On the issue of the disciplinary case, we have agreed that it is correct for leadership to stay clear of the process as the officials will be expected to implement the outcome of the process. If any of the national officials comment on a matter that is still pending it may be interpreted as trying to influence the outcome. It is therefore not correct for any of the officials to comment on the content and outcome of any case.”

Double standards?
But in a hard-hitting letter addressed to Mantashe, the youth league accused the secretary general of applying double standards.

“Our concerns arise out of the reality that it is now becoming apparent that what is admissible in the ANC is to admonish and condemn the leadership of the ANC Youth League,” according to the league’s confidential letter, penned by secretary general Sindiso Magaqa.

It continues: “On various occasions, leaders, including officials of the ANC have spoken about issues relating to the disciplinary process and discipline in the ANC and they were never called to order by the leadership collective. We believe it is inconsistent of the ANC leadership to apply some principles and values to certain leaders whilst failing to do so to other leaders.

In an interview with City Press in August last year Zuma lashed out at the youth league over its statements about effecting regime change in Botswana. A few days later, Mantashe reportedly told delegates at a Food and Allied Workers’ Union conference that Malema was a “poison” that needed to be rooted out of the party.

The youth league sees both Zuma and Mantashe’s statements as evidence of prejudging the case against Malema and other league officials.

In its letter the youth league said it took exception to Mantashe’s statement targeting Phosa.

“The ANC Youth League is of the strong conviction that the foundation upon which the ANC is built of open democratic engagement will be eroded if leadership at senior level applies principles inconsistently. Inconsistent application of principle might easily trickle down to structures of the ANC if national officials are the ones who condemn and dissociate themselves from leaders who say the ANC does not have dustbins for cadres, whilst embrace those who conclusively say the ANC Youth League crossed the line and harsher sentence should be taken even before a formal disciplinary process commences.

“The ANC Youth League brings all these aspects to the attention of the leadership collective and implores that principles should be applied consistently because anything else will undermine the integrity of the ANC,” reads the letter.

Letter received
Mantashe confirmed that the letter had been forwarded to his office but declined to comment further.

The youth league leaders have expressed confidence that Ramaphosa, who is described as a level-headed ANC leader, would be fair on the youth league’s appeal, compared to what they say was the hostile stance taken by the national disciplinary committee’s chairperson, Derek Hanekom, and other members, including performance and Evaluation Minister Collins Chabane and Mineral Resources Minister Susan Shabangu.

The ANC youth league is expected to argue that the case against it is politically motivated and that Hanekom went all out to persecute its leaders.

Malema will also argue that the league’s leaders were not given an opportunity to present mitigating factors before their sentencing.

Senior ANC leaders who have publicly called for a political solution to the youth league leaders’ case include ANC veteran Winnie Madikizela-Mandela and Sexwale.

The appeal hearing begins on Monday. — Sapa and M&G