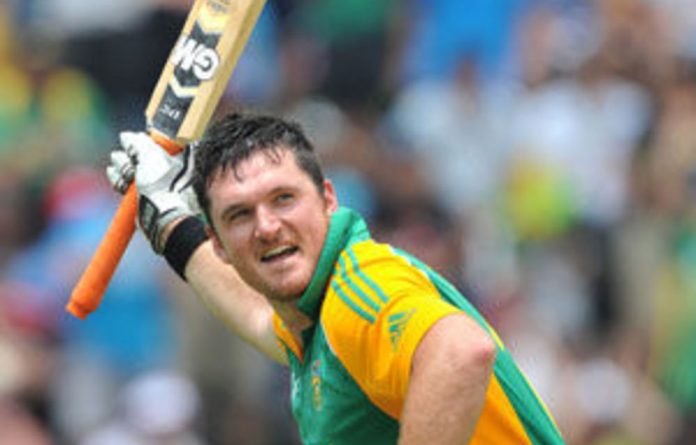 Sachithra Senanayake struck a six off the penultimate ball to give Sri Lanka a two-wicket triumph over South Africa on Sunday in the final match of an international series, won 3-2 by the hosts.

AB de Villiers and Graeme Smith got 125 each as South Africa made 312-4, but a century from Kumar Sangakkara led the tourists to 314-8 and a second win within three days.

Set a target of 313 to win, Sri Lanka seemed in control towards the end until they lost three wickets off four balls and suddenly the Proteas looked like they could finish off the match.

Mindful of the rain after an hour of play was lost, the Sri Lankans made sure they were ahead of the Duckworth-Lewis calculation throughout most of their innings.

After five overs, they had reached 43 for no loss, compared with South Africa’s 14 for one at the same stage.

A sensational catch from JP Duminy — running backwards from cover — removed Upal Tharanga (46) who was looking in great touch, and had put on 72 runs off 61 balls with captain Tillikaratne Dilshan.

Highest score against hosts
Dilshan made 41 before he was caught behind by wicketkeeper AB de Villiers, putting pressure on find-of-the-tour Dinesh Chandimal (20), who made a rare failure with the bat by his standards.

He did, however, share a 56-run stand with Kumar Sangakkara for the third wicket, but Sri Lanka dropped below the required run rate for the first time in the match.

Sangakkara (102), named Man of the Match after his first century of the limited overs series and second of the tour, took 96 balls for his milestone.

This was also his highest score against the hosts with the previous being 88 made in Brisbane, Australia in 2006.

He was out the next ball after reaching his century, trying to power Duminy out of the park, but was caught by Robin Peterson in the deep.

This ended a 100-run partnership with Lahiru Thirimanne that came off 89 balls.

De Villiers named Man of the Series
Thirimanne, a late addition to the touring party, scored his first half-century of the tour with a handy 69 off 63 balls.

His wicket fell midway through the last over when nothing short of a boundary was needed to win the match.

Then ODI rookie Sachithra Senanayake, playing in only his second match, blasted the penultimate ball off Peterson over midwicket for six — the same manner the visitors finished off the previous match in Kimberely on Friday.

Earlier after South Africa were inserted, opener Graeme Smith and AB de Villiers combined for a 186-run third wicket partnership that steered then to 312 for four off their allotted 50 overs.

Smith (125) achieved his highest score at the Wanderers and against Sri Lanka, but more importantly, reached his first ODI century — and ninth overall — since September 2009.

De Villiers played an entertaining innings as he raced to his 12th ODI century off 88 balls.

He was unbeaten on 125 off 98 balls when the innings closed, and later named Man of the Series.

Scores were as follows:

A Petersen c Mathew b Malinga 6

A Morkel run out (Dilshan/Perera) 18

JP Duminy not out 5

U Tharanga c Duminy b Tsotsobe 46

A Mathews c Peterson b Parnell 6

R Herath not out 1

S Senanayake not out 6

Did not bat: L Malinga