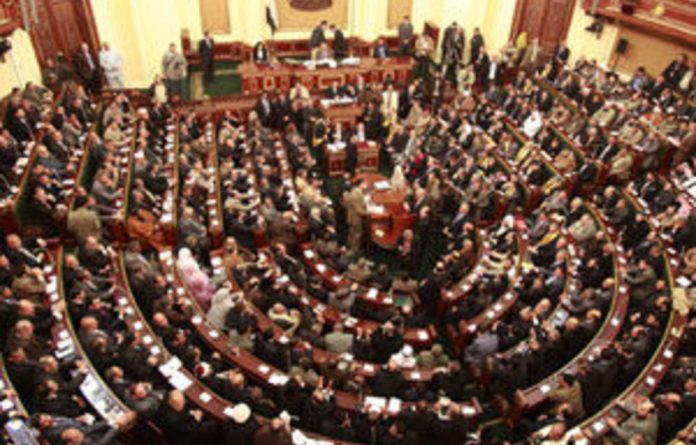 With Islamists comprising the overwhelming majority of its lawmakers, the Parliament elected in Egypt’s first legislative vote after Hosni Mubarak’s ouster nearly a year ago held its inaugural session on Monday.

The convening of the new Parliament is a significant benchmark in the timetable provided by the generals who took over from Mubarak for the handover of power to a civilian administration.

It is also a step forward for Islamist groups on the road to becoming the strongest political force in the nations that experienced Arab Spring revolts. Islamists dominated elections first in Tunisia and then in Egypt, and Libya’s Islamists are also expected to do well in parliamentary voting later this year.

The Egyptian chamber’s top priority is to elect a 100-member panel to draft a new constitution, which will have to be put to a vote in a nationwide referendum.

The next major step in the transition will be presidential elections, scheduled to be held before the end of June, when the generals are due to step down.

“The era of political exclusion is over,” said Saad el-Katatni, an Islamist lawmaker from the Muslim Brotherhood, Egypt’s largest and best organized political group. He was expected to win the position of speaker.

The Brotherhood has been banned for most of its 84-year history, legalised only after the 18-day popular uprising in early 2011 that ousted Mubarak.

Free vote
Elections which started on November 28 and ran into January were the most free in Egypt’s modern history. Elections for Parliament’s upper chamber, a largely toothless body known as the Shura Council, will begin later this month.

The outcome of the elections reflect the strength of the Islamists in Egypt, a mainly Muslim nation of some 85 million people that has grown steadily more religiously conservative over the past 40 years.

The Brotherhood spearheaded the Islamist victory in Egypt, winning just under half of all the seats.

In second place to the Brotherhood came another Islamist group, the ultraconservative Salafis, with nearly a quarter of the seats.

The liberal and left-leaning groups that organised the anti-Mubarak uprising garnered less than 10% of the seats. Many of them were not as well prepared for the vote as the Islamists, particularly the Brotherhood, whose members have over years of underground work acquired a high degree of discipline and loyalty.

Several of these lawmakers wore yellow scarves saying, “No to military trials for civilians,” a reference to the hauling of at least 12 000 civilians before military tribunals since the generals took over power in February last year.

The Islamists’ dominance was obvious in Monday’s session, where many lawmakers sported long beards, clerical turbans or flowing robes.

“We are here because the People’s Assembly [Parliament] is all Islamists,” said Mina Samir, a protester in his early 20s who was among several thousand demonstrators near the Parliament building calling for an end to military rule. “Now we have a military power supporting a conservative power. That’s why I am here.”

What was supposed to be a quiet procedural session turned briefly chaotic when some lawmakers improvised additions to the text of the oath they were taking in turn, provoking angry protests from the interim speaker, Mahmoud El-Saqqah of the liberal Wafd party.

The oath ends with a pledge to respect the constitution and the law, but several Islamist lawmaker added “God’s law” or “as long as there are no contradictions with God’s law.” Pro-reform lawmakers also improvised, with two of them pledging to “continue the revolution” and “be loyal to its martyrs”.

The convening of Parliament is a moment of triumph for the Brotherhood, whose members endured arrests and intimidation by Mubarak’s feared security agencies.

The Brotherhood has contested parliamentary elections since the 1980s, circumventing the ban on the group by fielding candidates as independents. They won 20% of Parliament’s seats in 2005, but could not win a single seat in elections held in November and December 2010, thought to be the most fraudulent since army officers seized power in a 1952 coup that toppled the monarchy.

On Monday, Brotherhood volunteers escorted their lawmakers into the Parliament building.

“I want to make sure that my representatives are safe. I want to celebrate and make sure that no one ruins this atmosphere. There are many who want to ruin it,” said Fathy el-Sayed, a 35-year-old Brotherhood supporter outside Parliament.

Elected by the people
Others waited outside Parliament with flowers they said they planned to give to their lawmakers. They chanted religious songs to the beat of drums.

“Democracy brought the people [who are] inside the building now. They were elected by the people,” said Adel Musbah, a supporter of the Salafi el-Nour party.

He questioned planned protests by pro-democracy groups marking the first anniversary of the start of the uprising. “Why are they coming to object?” he said.

Security was tight in the area around the parliament building, scene of recent deadly clashes between troops and protesters demanding that the generals immediately step down. The building is also a short distance away from Tahrir Square, birthplace of the uprising that topped Mubarak’s 29-year regime.

Monday’s session was chaired by el-Saqqah because he was the oldest lawmaker.

He began the proceedings by ordering lawmakers to stand in silence for a minute in memory of the hundreds of protesters killed during the protests. — Sapa-AP