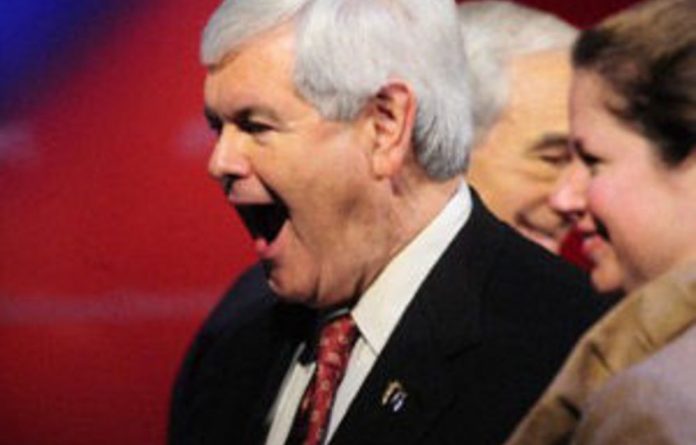 Newt Gingrich received a major financial boost on Monday when the family who donated $5-million to an organisation supporting his campaign earlier this month gave another $5-million.

Details of the donation emerged as Gingrich made public his contract with the government-backed mortgage giant Freddie Mac, which many Republicans blame, alongside sister organisation Fannie Mae, for playing a key role in the subprime mortgage crisis.

Gingrich received at least $1.6-million advising the giant lender, a fact that Romney is using as the main focus of his attacks on the former speaker as he attempts to regain the initiative after his massive defeat in South Carolina.

The 15-page contract shows that Gingrich was paid $25 000 a month for “Consulting and related services as requested by Freddie Mac’s Director, Public policy”. Beyond that, the contract appears to contain little other detail on what Gingrich’s role involved. It remains to be seen whether the release will be enough to stop the criticism.

Controversial lender
On Twitter, senior Romney adviser Eric Fehrnstrom questioned why Gingrich had released only the 2006 contract when he had advised them since 1999. “Under Freddie contract, Newt has to provide monthly a ‘detailed description of the services provided’. Why not release that?” Fehrnstrom wrote.

Florida was one of the states hit hardest by the ensuing housing collapse and the former White House speaker’s ties to the controversial lender look set to be a major talking point at Monday’s Republican debate in Tampa.

Earlier on Monday, Romney attacked Gingrich at a rally in Daytona Beach: “He talks about great, bold movements and ideas. Well, what’s he been doing for 15 years? He’s been working as a lobbyist … that’s selling influence around Washington,” he told supporters at a rally.

In an interview with ABC on Monday morning, Gingrich denied he had ever worked as a lobbyist for Fannie Mae and Freddie Mac and had only been an adviser. “I did no lobbying, period,” Gingrich said.

“Strategic advisor?” queried New Jersey governor Chris Christie, a Romney supporter, on NBC’s Sunday show, Meet the Press. “That is the oldest Washington dodge in the book. That’s because he didn’t want to register as a lobbyist … First he said he was a historian, now he says he was a strategic advisor. He was using his influence that he obtained in public office to try to help get paid $1.6-million.”

Expensive campaign
The need for the Romney campaign to get the ‘lobbyist’ charge to stick was given added urgency by a series of polls released showing that Romney’s double digit lead in Florida has evaporated with Gingrich either in the lead or in a dead heat. Insider Advantage has Gingrich at 34% to Romney’s 26%, with Ron Paul at 13% and Rick Santorum 11%.

Rasmussen has Gingrich at 41% to Romney’s 32% while Public Policy Polling said its poll, still to be released, has the two tied.

The latest injection of Adelson money for the Gingrich-backing organisation, Winning Our Future, means that Romney no longer massively outguns the former speaker in his ability to buy expensive television advertising slots, a crucial factor in the Florida race.

Sheldon Adelson is the eighth wealthiest American, with a $23-billion fortune, capable of sustaining Gingrich all the way through the nominating process if need be. But Gingrich, on the back of the success of South Carolina, will see money coming in from other sources too. —