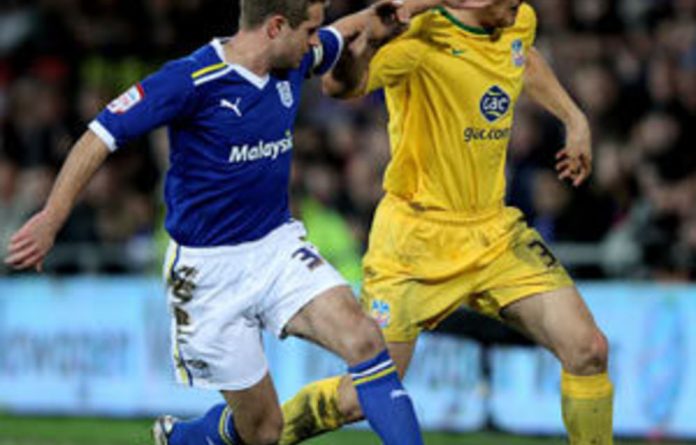 Cardiff battled through to the League Cup final on Tuesday, overcoming a first leg deficit to defeat Championship rivals Crystal Palace on penalties.

Palace, who had captain Patrick McCarthy sent off late in the game, had withstood wave after wave of Cardiff pressure to take the match to a penalty shoot-out after the tie finished 1-1 on aggregate.

But the Eagles’ nerves failed them in the shoot-out, with Jermaine Easter, Sean Scannell and Jonathan Parr all missing from the spot as Cardiff booked a place in the final against either Liverpool or Manchester City.

The game had gone to spot kicks after Anthony Gardner — the goal hero for Palace in the first leg — scored an own goal after only seven minutes to give Cardiff the initiative in a frenetic opening spell.

Gardner could only watch in horror after he got on the end of a Craig Conway cross to head past stranded keeper Julian Speroni into his own net.

Cardiff dominated for much of the match, carving out a string of opportunities to take the lead but unable to find the killer touch in front of goal as Palace clung on.

Trickled effort
Full-back Andrew Taylor bludgeoned a volley over the bar and veteran Scottish striker Kenny Miller should have done better when gifted an opportunity after a poor headed clearance by Parr fell to Aron Gunnarsson.

Miller also had the home crowd out of their seats near half-time when his volley crashed off the woodwork. A similar pattern unfolded in the second half but again Cardiff’s finishing let them down.

Palace were reduced to 10 men 13 minutes from time, McCarthy receiving his marching orders from referee Howard Webb after picking up his second yellow card of the night for flattening Miller.

Cardiff were unable to make the extra man count and the game duly went to extra-time.

The Bluebirds were on top throughout the additional 30 minutes with Filip Kiss and Gunnarsson hitting the woodwork before the penalty drama. — AFP