Obama targets Wall Street wallets in State of the Union 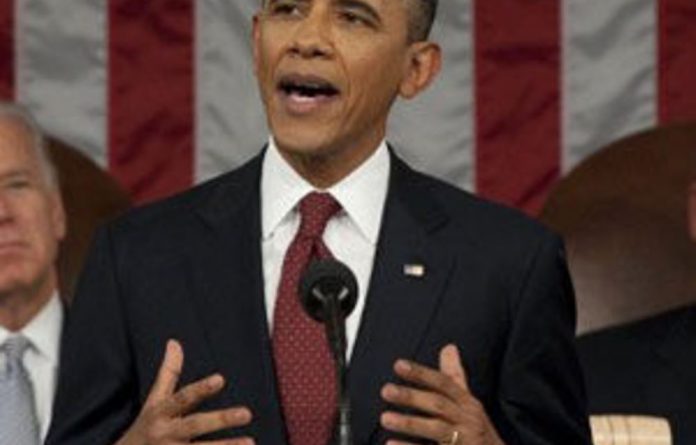 US President Barack Obama used his last State of the Union speech before the November election to paint himself as the champion of the middle class by demanding higher taxes for millionaires and tight reins on Wall Street.

Taking advantage of the huge national platform of his annual speech to Congress, Obama defiantly defended his record after three years in office and laid blame for many of the country’s woes at the feet of banks and an out-of-touch Congress.

He proposed sweeping changes in the tax code and new remedies for the US housing crisis as he made the case for reducing income inequality in America.

While the biggest proposals in Obama’s election-year speech are considered unlikely to gain traction in a divided Congress, the White House believes the president can tap into voters’ resentment over the financial industry’s abuses and Washington’s dysfunction.

But even as he called for a “return to American values of fair play and shared responsibility,” Obama seemed to take no blame on himself for a fragile economy and high unemployment that could trip up his re-election bid.

Instead he launched a highly partisan attack over taxes, the most divisive issue at the heart of this year’s presidential campaign, and said: “I will not go back to the days when Wall Street was allowed to play by its own set of rules.”

“Washington should stop subsiding millionaires,” Obama declared as he proposed a minimum 30% effective tax rate on those who earn a million dollars or more.

Tax targeting
Obama’s message could resonate in the 2012 campaign following the release of tax records by Mitt Romney, a potential Republican rival and one of the wealthiest men ever to run for the White House. He pays a lower effective tax rate than many top wage-earners.

A new proposal outlined by Obama to ease the way for more American homeowners to get mortgage relief — and to pay for the plan with a fee on banks blamed for helping create the housing crisis — also struck a populist note.

“Millions of Americans who work hard and play by the rules every day deserve a government and a financial system that does the same,” Obama told a joint session of Congress.

Democrats have hammered Republicans in Congress for supporting tax breaks that favour the wealthy. Republicans staunchly oppose tax hikes, even on the richest Americans, arguing they would hurt a fragile economic recovery.

“No feature of the Obama presidency has been sadder than its constant efforts to divide us, to curry favor with some Americans by castigating others,” Indiana Governor Mitch Daniels said in the Republican response to Obama.

House of Representatives speaker John Boehner, the top congressional Republican, insisted the election would be a referendum on the president’s “failed” policies.

The US unemployment rate was 8.5% in December. No president in the modern era has won re-election with the rate that high.

Cheers and silence
Obama’s rhetoric and his audience’s response was more overtly partisan than last year when both sides sought a tone of civility in the aftermath of an assassination attempt on Democratic Arizona lawmaker Gabrielle Giffords.

In the most emotional moment of the evening, Obama warmly embraced Giffords as he made his way to the podium. The congresswoman, who has made a remarkable recovery after being shot in the head, announced on Sunday she was retiring from Congress.

The response to Giffords was one of the few moments of bipartisan enthusiasm in a Congress riven by antagonism.

Democrats rose en mass to cheer, and Republicans stayed seated in stony silence, when Obama vowed to “oppose obstruction with action”. But both sides applauded when Obama called for developing all domestic energy sources.

Obama used the speech to revive his call to rewrite the tax code to adopt the so-called “Buffett rule”, named after the billionaire Warren Buffett, who says it is unfair that he pays a lower tax rate than his secretary.

To underscore his point, Buffett’s secretary, Debbie Bosanek, was seated in the first lady’s box in the House of Representatives for Obama’s address.

China, Peace and housing
Obama also rolled out proposed corporate tax reforms, including a minimum rate on companies’ overseas profits and a tax credit for moving jobs back home.

Taking aim at China — an election-year target of Republicans and Democrats alike over its currency and trade practices — Obama proposed creation of a new trade enforcement unit within the federal government.

Promising what amounts to a peace dividend, Obama also proposed using half of the “savings” from ending the war in Iraq and winding down in Afghanistan to pay down US debt, with the other half going to fixing decaying infrastructure like roads and railways.

Addressing the housing crisis, Obama said he would send to Congress a proposal to allow more Americans to take out new and cheaper mortgages as long as they are current on their payments, savings that would amount to $3 000 per household each year.

Blaming banks for helping to cause the problem in the first place and saying a “deficit of trust” remained, Obama told Congress that financial institutions would be asked to cover the cost of the plan via a proposed bank fee.

Record-low interest rates have already spurred many US homeowners to refinance their mortgages, but the housing crisis continues to drag on the US economic recovery.

While these initiatives do not offer a quick fix for high unemployment that threatens Obama’s re-election prospects, his speech was a chance to put down markers for his own re-election campaign amid saturation coverage of the volatile race to choose a Republican opponent.

“We can either settle for a country where a shrinking number of people do really well, while a growing number of Americans barely get by,” Obama said. “Or we can restore an economy where everyone gets a fair shot, everyone does their fair share.” — Reuters