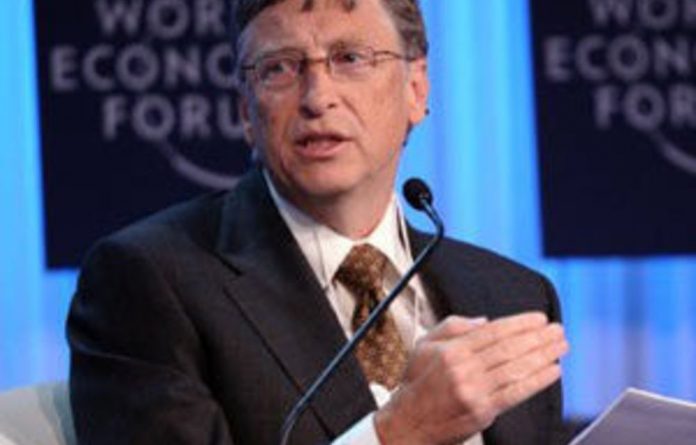 Bill Gates rode to the rescue of a beleaguered health fund on Thursday by pledging $750-million to fight three of world’s killer diseases.

The Microsoft founder says the Bill & Melinda Gates Foundation’s donation to the Geneva-based Global Fund to Fight Aids, Tuberculosis and Malaria comes on top of $650-million it contributed to the fund over the past decade.

Gates said his pledge at the World Economic Forum — a magnet for the world’s business elite — is meant to encourage other potential donors.

“These are tough economic times but that is no excuse for cutting aid to the world’s poorest,” he said at the forum.

A donor backlash over reports about poor financial monitoring and extensive losses at the $23-billion fund prompted the organisation last year to cancel more than $1-billion in new spending. The fund’s executive director, Dr Michel Kazatchkine, this week announced his resignation.

Saving lives
Gates said the promissory note was designed so the fund “can immediately use the money and save lives”.

He downplayed the fund’s reported losses of tens of millions of dollars to corruption, misuse and undocumented spending that were highlighted in stories by the Associated Press. He said he was lending his “credibility” to the fund so others would feel reassured.

“The internal checks and balances have worked in every case,” Gates told reporters. It was “disappointing,” he said, to see how people have focused on a “small misuse of funds”.

The public-private fund has helped change the fortunes of many of the world’s poor through its prevention and treatment programs among 150 countries, he said. The fund says over its 10-year existence, it has provided antiretroviral treatment to 3.3-million people, detected and treated 8.2-million people with tuberculosis and given 230-million bed nets to families to prevent malaria.

‘Untenable’
Japan’s former prime minister, Naoto Kan, told the news conference that his nation has contributed $1.3-billion to the fund. Kan also said the fund’s “transparency” must be maintained — which includes uncovering and publicizing its own losses — as the fund goes through a series of reforms launched last year after the AP stories.

“The European debt crisis is shaking the world economy, which in turn seriously affects the fortunes of the Global Fund. But it doesn’t mean the significance of the Global Fund is less,” Kan said. “The corruption exists. It’s regrettable, but that’s reality.”

Kazatchkine, who has been at odds with the office that has been uncovering the losses, resigned after the board decided to create a new position of general manager to chart a new direction. He said it was “untenable” for him stay on.

Global Fund board chairperson Simon Bland said the fund is “transforming the way we do business” by streamlining the organisation and will continue to “hold ourselves accountable” for what it spends.

“There will be no shying away from that transparency,” Bland said. — Sapa-AP