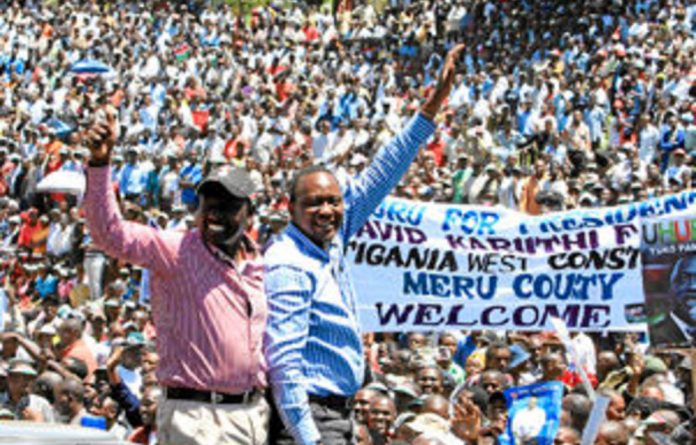 Kenya’s political landscape was given a seismic jolt on Monday when four Kenyans, two with presidential ambitions, had charges against them confirmed by the International Criminal Court (ICC) in The Hague.

The most senior of these and Kenyan President Mwai Kibaki’s choice as his successor is Uhuru Kenyatta, deputy prime minister and finance minister, and son of founding president Jomo Kenyatta.

Elections are scheduled for not later than May next year and Kenyatta will probably have to leave the race, particularly if the justice and constitutional affairs minister, Mutula Kilonzo, has his way. Kibaki is ineligible to run for a third five-year term.

“The Constitution of the country is very clear. It forbids any individual facing a criminal charge from running for public office, irrespective of their political, social and economic station — and that’s the genuine legal position. Any other interpretation stands null and void,” said Kilonzo.

The other senior politician is the influential William Ruto, who has a strong tribal following in the Rift Valley region, a perennial flashpoint of violence in the lead-up to national elections. The remaining two — Francis Muthaura, head of the public service and a key ally of Kibaki, and Joshua Sang, a radio journalist affiliated to a community radio targeting the Rift Valley — are arguably small fish, politically speaking.

“The camp coalescing around Kibaki was batting for Uhuru, because his candidacy represents a continuation of the status quo, which saw a handful of politically correct individuals becoming very rich while the rest of their counterparts continued just to survive.

“On the positive side infrastructure growth was doubly given priority with major gains being registered under Kibaki’s watch. Uhuru’s ascendency to the presidency would have continued on a similar path,” said Adams Oloo, a political science and administration lecturer at the University of Nairobi.

Politics along ethnic lines
Ethnic fault lines, an internecine phenomenon that plays out during elections, have developed around Prime Minister Raila Odinga, considered the man to beat in the polls. He has been accused of engineering the predicament facing his two challengers, a charge he denies.

“We believe Raila, including his political underlings, are culpable for the misfortune Uhuru and Ruto are facing presently. He, in particular, bears the biggest responsibility for the crimes the duo are accused of doing, because he was the political party leader of the ODM [Orange Democratic Movement], and those who travelled to The Hague as witnesses to testify on behalf of the ICC prosecutor were coached on what to say. And most of those who testified, particularly against Uhuru, were drawn from Raila’s Luo community,” said David Murathe, a former MP and confidant of the finance minister. The Raila camp pooh-poohed the allegation.

According to Judge Ekaterina Trendafilova of the ICC, the four Kenyans collectively face charges of forcible transfer of people, rape, murder and crimes of aggression, committed after the announcement of contentious presidential results in December 2007, which triggered ethnic violence that resulted in the deaths of 1 100 people, the injury of 3 500 and the displacement of up to 600 000.

At the time Ruto and Raila were close political allies but they fell out after differing over whether a local tribunal or the ICC should try individuals.

“The scheduled elections will likely see, for the first time, the Kikuyu and Kalenjin communities working together since political pluralism became a reality here. And the reason is largely because of the sympathy Uhuru and Ruto are likely to receive from their respective communities,” said Ndungu Wainana, director of the Nairobi-based International Centre for Policy and Conflict.

In the past the Kikuyu and Kalenjin communities have been fierce political rivals, which has frequently led to ethnic violence in the Rift Valley, the ancestral home of the Kalenjin but a region where other communities, particularly the Kikuyu, have settled.
It is arguable that, with the fervent Kalenjin support, Ruto helped Raila make an impressive showing in the last elections. To date, it is not clear who won the presidency, Kibaki or Raila.

“If Uhuru and Ruto can successfully navigate the law landmine that ostensibly bars them from running for public office, Kenya’s political landscape will change in a big way, essentially because those two communities, were they to combine their vote, would rest assured of producing a winning candidate for the top seat,” said David Mwangi, a political science professor at the Maseno University.

For now, the country has to agree on a date when the elections will be held. It also remains to be seen whether Uhuru and Ruto can work together, which is considered a long shot, bearing in mind that both believe they have a real chance of becoming president of East Africa’s biggest economy.

“The biggest headache lies with both President Kibaki and Prime Minister Odinga in that Kibaki must quickly think of a probable replacement should the law be enforced leading to the barring of Uhuru, while Raila must also quickly find ways of placating generally the Kikuyu and Kalenjin voters if he is serious with his presidential ambitions,” said Professor Godfrey Muriuki, a senior political science and history lecturer at the University of Nairobi.

Kenya: How the ‘Chameleon’ Jomo Kenyatta did it