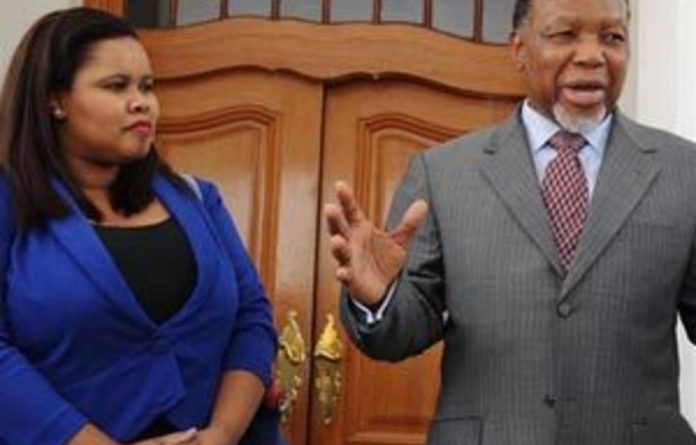 After a three-hour meeting at the OR Tambo governmental guesthouse in Pretoria, the two emerged with broad smiles and amicable responses to the media.

This was the first meeting between Motlanthe and Mazibuko in the latter’s capacity as newly-elected leader of the DA in Parliament.

“Meetings like this indicate we should engage more often as there is room for more constructiver engagement across political lines,” Mazibuko told the Mail & Guardian.

The duo issued similar statements after the briefing, describing a constructive engagement, whereby Motlanthe agreed to guarantee government ministers respond timeously and adequately to all questions posed to them.

The issue of government ministers responding insufficiently to the answers posed by rival political parties has been longstanding for opposition parties — especially the DA.

“The deputy president reported that measures are currently being put in place to improve the relationship between the executive and Parliament. Unanswered questions are now brought to each Cabinet meeting to ensure that ministers explain why they have failed to respond on time,” said Mazibuko.

Thabo Masebe, Motlanthe’s spokesperson, also described the meeting as “fruitful”, which has allowed both parties to “openly express their views”.

“They had a lot of issues to talk about. Time wasn’t an issue and both of them were allowed to argue their points of view,” Masebe told the M&G.

Mazibuko said that while “time will only demonstrate his sincerity”, she will “take his word” for the moment.

“These are positive signs as he has already made attempts to ensure ministers are held accountable and guarantee the executive branch of government treats the legislative branch with respect,” she said.

As promising as this may sound, this is no indication of a change in the way the ANC-led government deals with its parliamentary counterparts.

There are also no solid time-frames in place to assess progress or results in the aforementioned processes undertaken by Motlanthe.

“I will definitely be following up on this on an ongoing basis to make sure headway is made in achieving these goals,” said Mazibuko.

The ruling party has said consistently it would “engage” with all political parties represented in Parliament, but has never promised any direct action relating from meetings such as this.

“We will always engage with those parties represented in Parliament over a continuous period,” was the bland comment Masebe offered in this regard.