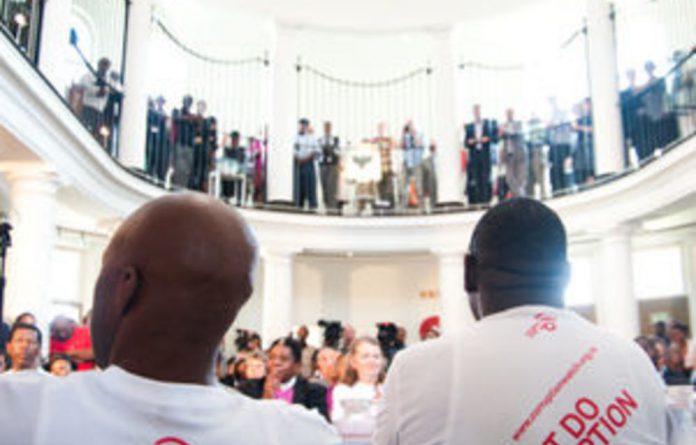 It was more than two years ago now that a Kenyan friend lamented, after we had spent the previous hour talking about whatever corruption scandal had hit the papers that week, how much South Africa was starting to look like her native country.

She had grown up in the glow that followed independence and then, as an adult, watched it slowly erode.

“First it was just the small things — just one, one, one,” she said drawing her fingers up in the air and pulling them down like rain.

“Then people started to get killed in car accidents.”

It made my stomach turn then, as it does almost daily in our editorial meetings, where local corruption tops our news diary, without fail, each week. One by one by one. At night, as I turn out the light, I look towards the stack of books on my bedside, at the top of which sits It’s Our Turn to Eat by journalist Michela Wrong on Kenyan corruption, and nervously wonder where we are headed.

On Thursday morning in the standing-room-only foyer of the Women’s Jail at Constitution Hill, I found myself knee-deep in it all again.

At the launch of Corruption Watch, an independent civil society institute headed by David Lewis, the veteran trade unionist who was the chairperson of the Competition Tribunal until he stepped down in 2009, I listened to Cosatu chairperson Zwelinzima Vavi reel off the numbers.

Vavi pointed to the estimate put out by former head of the Special Investigating Unit Willie Hofmeyr that government loses about R30-billion a year to corruption. He referred to the auditor general’s report, which recently uncovered R26-billion in unauthorised expenditure in 2010-11, and found that just three out of 39 government departments and 106 out of 272 state-owned enterprises had clean audits for 2011.

It’s this sort of corruption that Lewis and Vavi — along with their impeccable list of board members, including Thuli Madonsela, Bobby Godsell, Adila Hassim, Mary Metcalfe, Mavuso Msimang, Archbishop Njongonkulu Ndungane, Vuyiseka Dubula and Kate O’Regan — are hoping the public will help combat.

With their website (corruptionwatch.org.za), social media and an SMS line, they plan to gather reports of corruption and “heat map” corruption hotspots.

They’ll aggregate what they gather and use it to initiate research, commission reports and publish what they come up with online.

There are plans to work with organisations throughout the country to share information, engage in policy-based advocacy and bring corruption out of smoky backrooms and into the light.

But, as Vavi, Lewis and Madonsela — who all spoke at the event — told the packed room, it really comes down to us. And we’re a tough crowd to convince. It seems we don’t believe our voices will do much of anything. The Corruption Watch website refers to a recent survey which found that 83% of adults believed that corruption was just a way of life in South Africa.

So it seems their first order of business is to make us all believe. In that vein, they asked everyone in the room to sign a pledge to be a “responsible and honest citizen” and to not pay or take bribes; to obey the law; to act with integrity in dealings with government; and to “remember that public resources are intended for the benefit of the people, not for private gain”.

After all the speeches were made and an oversized posterboard with the pledge was signed by the board members, questions were fired from the audience to Madonsela, Vavi, Lewis and Justice Minister Jeff Radebe, who gave the keynote address. What about the Secrecy Bill that would work against whistleblowers? What about the tension between the judiciary and the executive branches? What about the break-up of institutions like the Scorpions? Isn’t this just another talk shop? And, from a foreign correspondent, how did it get to this stage anyway?

Vavi grinned. Why has it worsened? Because of the system of capitalism that promotes the survival of the fittest and the dog-eat-dog mentality. Because there is a layer of sycophants protecting some politicians. Because you have public servants working for their own private interests.

“I guess we took too long to be free,” Vavi said. “It’s our time, now is our time to eat. Now we are eating on behalf of the masses. We are sipping this champagne for the masses through our lips.”

When the launch came to a close, everyone in the room was asked to sign the pledge. The ball, it appeared, was now in our court. As I filed this story on Thursday afternoon, there were 391 names on the ticker. Full disclosure: I put my name down and crossed my fingers. Here’s to better days ahead.