Fresh from the balcony 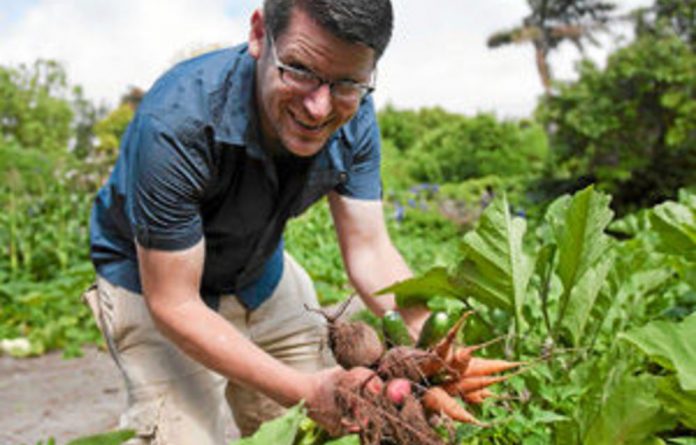 ‘I wasn’t happy with the quality of food I was buying and thought I could do a better job. So I started growing it,” said Matt Allison, standing in middle of 400m2 of vegetable plants.

Allison was talking over the roar of traffic from Constantia Main Road. Neighbours’ roofs look on indifferently over the suburban barbed wire.

It’s a far cry from the typical pastoral scene, but just that morning the 31-year-old small-scale farmer harvested 40 carrots, 30 radishes, 1kg of lettuce and 1kg of marrows and delivered it fresh to one of the ethical Cape Town eateries he supplies.

“We like that, because urban farmers are passionate, the quality and diversity of their produce is usually awesome,” said Societi Bistro’s executive chef, Stefan Marais, one of ­Allison’s customers.

“Buying from them also keeps the carbon footprint down and supports local industry, keeping the money in the city.”

Delicious variety
Five types of lettuce, eight types of tomatoes, three types of radish — Allison talked me through his produce but I could not keep up. Cauliflower, sorrel, artichokes, ­chamomile, fennel, carrots, broccoli, herbs, watermelon, aubergine, basil, ­beetroot and more. This is far more lush than the vegetable gardens I recall from my childhood.

A rehabilitated musician and ­engineer, Allison cannot seem to help beaming. “I earn a pittance compared with when I was in the nine-to-five rat race but I have a healthy, fun family.

“I enjoy being outdoors and ­bringing good food to people,” he said, c­ontinuing to extol the virtues of growing one’s own food and tapping into the unused, often highly fertile city resources.

It was when Allison became a parent almost two years ago that he first started questioning where the food he ate came from. Discovering the underbelly of industrialised agribusiness, he hated the environmental impact, lack of diversity and cultural indifference of the food industry that he, and all of us, have come to take for granted.

Allison started with planters at home, moved on to a box and finally ripped up his garden to build his first farm. Still growing strong and supplying 70% of his household needs, Allison shared his surplus produce with his surrounding community.

Interest grew and Allison helped to set up a produce-only local market before meeting business partner and benefactor Allison Curry, who owns the land on which we were standing.

Urban farming is definitely on the rise, he believes, and Pat Featherstone, founder and chief instigator of Soil for Life, agreed. “It’s amazing.The people who come to our workshops used to be older people. It’s now right across the board,” she said.

Community spirit
Soil for Life is a non-profit organisation that teaches people to grow their own food in an environmentally sound way. Although their primary motivator and outreach is the disadvantaged township ­communities of Cape Town, they also run workshops for the more privileged as an income generator.

In 2008, under Featherstone’s leadership, Soil for Life made a radical break from the traditional model of community food gardens to develop a home food-gardening programme.

Instead of the resource and cost-intensive community food ­gardens that benefit relatively few, the new progamme has been immensely popular and successful with a much lower attrition rate.

It is a scalable model, Featherstone said. “If every single South African grew some food at home — even sprouts on your kitchen windowsill — not only would there be an improvement in health, but it would have a huge impact on agriculture, which is the worst polluter and ­biggest user of water.”

It is this growing environmental awareness, as well as an increased concern about personal health, that has driven the urban farming ­movement, Featherstone said.

Embracing alternatives
One of the numerous City Bowl balcony farmers, Niel Meiring, agreed. “I think that people have finally realised that the food you buy at the shop is not necessarily the healthiest option and, you know, you can finally ‘stick it to the man’ and not buy their food.”

Boasting balcony-grown tomatoes, coriander, basil, rocket, oregano and parsley, the 30-year-old graphic designer is motivated by more than personal and environmental health, though “I find it therapeutic and an escape from work and stress. It is just cool watching things grow and looking after them.”

And when a Capetonian dressed in skinny jeans says something is “just cool”, well, you know it is time to grow your own.

Feast at the farm

Art with a black heart

Plastic post-mortality has been perfected

Thing of beauty: Elusive art for man in the street