Gloves off in battle for Dlamini-Zuma 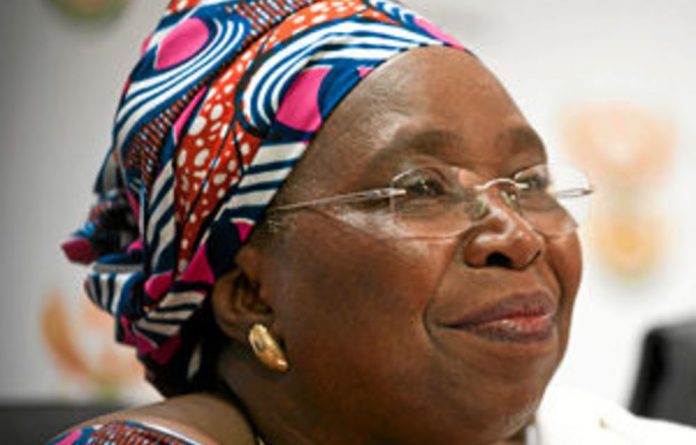 The South African government has adopted a strategy of subterfuge to ensure that Home Affairs Minister Nkosazana Dlamini-Zuma replaces incumbent Jean Ping as the chairperson of the African Union Commission at the two-day summit starting on Sunday in Addis Ababa, Ethiopia.

The government has in the past few months been lobbying throughout the continent for Dlamini-Zuma to be elected to the hot seat.

Sources in the department of international relations and co-operation who are familiar with the fierce lobbying for the position of AU Commission chair, told the Mail & Guardian this week that the government would use the same strategy that resulted in the late Libyan leader Muammar Gaddafi’s bid to pass a motion for the creation of a United States of Africa rejected by African leaders at the AU Summit in Ghana in 2007.

Ahead of the Ghana summit, Gaddafi had used his oil wealth to buy influence within the AU by paying off the debts of member states.

“At the time, we said to African leaders whose countries depended on Gaddafi: ‘Agree with him, but oppose him at the secret ballot’. We are doing the same with poor Francophone countries who depend on France for their survival to say: ‘Agree to vote for Ping, but when you get your ballot, vote Dlamini-Zuma’,” said an official, who spoke on condition of anonymity.

Dlamini-Zuma’s backers are worried that Francophone countries might be influenced by France to vote for Ping and snub South Africa, Africa’s biggest economy.

Except for Zimbabwe, all South African Development Community countries are expected to throw their weight behind Dlamini-Zuma. The SADC endorsed South Africa’s candidate for the position of chairperson of the AU Commission last year.

Relations between South Africa and Zimbabwe are at a low point since South Africa backed the United Nations Security Council resolution 1973 which called for a no-fly zone in Libya.

The M&G also understands that Zimbabwe is still bitter after South Africa refused to support its bid to become a member of the UN Human Rights Commission in 2009.

And Zimbabwe President Robert Mugabe is unhappy with President Jacob Zuma’s hardline stance against his regime’s reluctance to co-operate with the Movement for Democratic Change as per the SADC’s global peace agreement.

Nigeria could be a hurdle in South Africa’s path
Nigeria has also been cited by South African diplomats as a major obstacle to the bid. Relations between the two countries have been in a funk for some time, but it deepened over South Africa’s backing of former president Laurent Gbagbo during the battle for control of Côte d’Ivoire.

Some diplomats said that there had been intense international lobbying regarding the race, citing France and the United States as opponents of Dlamini-Zuma’s candidacy.

International relations spokesperson Clayson Monyela was optimistic this week that Dlamini-Zuma would be elected.

He denied media reports suggesting that South Africa was trying to delay the elections at the AU summit after certain South African government officials complained about the “unfair” rules of the poll.

“South Africa is not trying to delay the ballot, we can’t do that,” he said.

Monyela could also not say which countries had shown their support for Dlamini-Zuma, pointing out that the lobbying was still taking place.

“We remain cautiously optimistic. We have done a lot of work. We have crisscrossed the continent and have spoken to all heads of states, outlining our vision for the continent. We can’t say who is for or against us,” he said.

Government officials believe that Dlamini-Zuma’s experience as foreign affairs minister puts her in a stronger position than Ping to occupy the AU Commission’s top position.

Dlamini-Zuma’s competencies include strong strategic leadership skills and the vision to build a strong AU that will be able to wield its own authority in Africa and the world.

She also has extensive experience on AU matters, understands the unique dynamics of the AU, and is highly regarded amongst her peers in AU member states, the AU itself and the international community.

“To build an effective AU, you need the strong leadership of someone like Dlamini-Zuma who can call African dictators to order and take on the West. Ping has been weak. He was inefficient and indecisive,” a South African diplomat, who was not authorised to comment officially, told the M&G.

She is also credited for working hard to put forward South Africa’s candidature for a seat on the United Nations Security Council and for her efforts in “peace-building” on the African continent.

During her days at the then department of foreign affairs, Dlamini-Zuma commissioned a study to conduct a comprehensive analysis of the root causes of conflict in Africa.

The study found that among the triggers of conflicts was electoral fraud, ethnicity, state resources, vested interests by foreign actors and the cavalier construction of colonial borders at the end of the 19th century.

She is widely seen as having effected a turnaround in the hitherto chaotic department of home affairs over the past two years, tackling the corruption and mismanagement that have plagued it.

The election for the position of AU Commission chair will take place at the summit on Monday.

If Dlamini-Zuma is elected, she will have to resign from her current post as minister of home affairs and head to the AU’s headquarters in Addis Ababa.

Observers said Dlamini-Zuma’s candidacy would be a test for South Africa’s maturing diplomacy, as critics feel the country has failed to play a strong role on a regional level.

This year’s AU summit will be the first without Gaddafi and the first with the full participation of the new Libyan and Egyptian authorities.