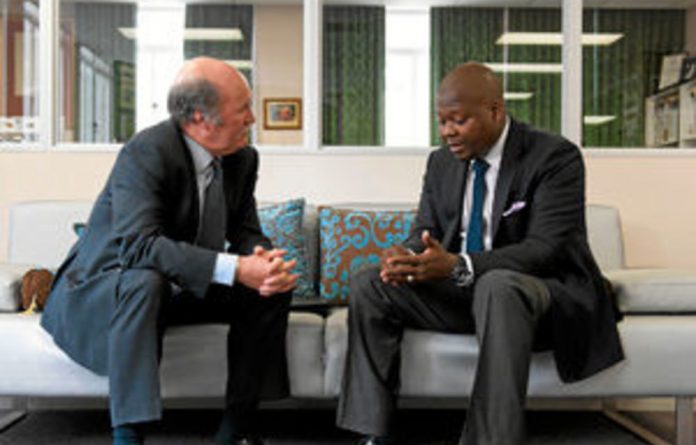 Why has Minister of Economic Development Ebrahim Patel not been called to give evidence at the Canyon Springs insolvency inquiry that is investigating the whereabouts of R100-million of clothing workers’ pension fund money?

Has he been let off the hook even though he was the general secretary of the Southern African Clothing and Textile Workers’ Union (Sactwu) in 2007 when the pension money was invested in Canyon Springs — a company part-owned by Patel’s former deputy minister of economic development, Enoch Godongwana?

Even though the inquiry was initiated by the union and the officials running it are paid by it, it said it was not shielding Patel from giving evidence. In fact, he was excused in November last year from giving evidence because of his prearranged work commitments, the inquiry’s commissioner Jan Reitz disclosed this week. “Minister Patel was excused from attending on a scheduled date because of parliamentary work commitments,” Johannesburg attorney Reitz told the Mail & Guardian. “No one approached me thereafter to resummons him.”

At the time Patel was subpoenaed to appear at the inquiry by attorney Barnabas Xulu, of law firm Xulu Liversage, who is representing the Trilinear Empowerment Trust, the investment vehicle used for the provident fund money.

Xulu wanted Patel subpoenaed because he held a senior position in the trade union in 2007 when the pension money was invested in Canyon Springs.

Last year Xulu was acting on behalf of the trustees of the Trilinear Empowerment Trust who have since resigned. The new trustees include the union’s general secretary, Andre Kriel, and its president, Themba Khumalo. The union’s attorney, Tony Canny, a director of top forensic firm Eversheds, said it was felt that there was no basis to subpoena Patel again.

“We haven’t found anything to implicate him in our forensic investigation, as well as at the inquiry,” said Canny. “At the hearing, we have not heard or seen anything that would implicate the minister. If we had found anything, we would have summonsed him. You have to have done something to be called and there has to be a basis for this. This is not a fishing expedition.”

Not a cent of the R100-million sunk into Canyon Springs was ever repaid and some clothing workers who are members of the union told the M&G that they feel that Patel should be resummonsed to assist the inquiry as it unravels the mystery of how the money landed up in Canyon Springs.

The scandal grew after Godongwana revealed to the M&G last year that he and his wife, Thandiwe, owned 50% of Canyon Springs in a family trust. Last week Godongwana resigned from his high-ranking post, amid growing “outrage” over his involvement in a company that allegedly defrauded the clothing workers of their hard-earned pension fund money.

The Godongwanas were resummonsed to appear at the inquiry on Friday this week.

Patel under pressure
But renewed pressure for Patel to testify at the inquiry is coming now from the Democratic Alliance (DA) economic development spokesperson Kobus Marais, who accused the union of “successfully smothering” any attempts to get the minister to give evidence. This allegation has been denied by the union. Canny said it was untrue that any attempts were being made to shield the minister.

Patel is attending the World Economic Forum’s annual meeting in Davos in Switzerland this week, with President Jacob Zuma. His spokesperson, Saleem Mowzer, said that Patel was willing to assist in any way he could in helping to trace the money. “Minister Patel was informed that there was no need for him to appear at the inquiry,” said Mowzer.

The inquiry was mired in controversy last year when Xulu claimed “a conflict” had developed after the union stepped in with funds to hold the Canyon Springs inquiry and its lawyers began running the hearings. While Xulu initially called for the liquidation of Canyon Springs, and was expected to find funds to fund it, he had to step back after he discovered there was no money in the Trilinear Empowerment Trust to run the inquiry.

The trade union secured the legal right to participate in the section 417/418 Companies Act inquiry by purchasing a debtor’s right to pursue the inquiry. It is the first inquiry in South Africa in which a trade union participates, by way of interrogating witnesses who have been subpoenaed to attend, said Kriel in a press release.

To secure the right to participate and run the inquiry, the trade union purchased R900 worth of debt owed to Dart Stationers by Canyon Springs for stationery purchases. But not everybody agreed that the union could be expected to be impartial in running the inquiry.

“The union is highly implicated in the matter,” Xulu told the M&G in October last year. “I don’t see how the inquiry can be independent if its lawyers are running it and deciding who can be subpoenaed.”

To illustrate his point Xulu said he felt it necessary for both Patel and the union’s suspended deputy general secretary, Wayne van der Rheede, to be subpoenaed.

Although he was told he would have to fund his own costs, and the costs of Patel’s appearance, Xulu flew to Pretoria to serve a subpoena on the minister last October. This week he declined to be drawn on whether he believed Patel should be resummonsed.

Marais has now submitted a request for Minister Patel to appear before the parliamentary portfolio committee on economic development so he can reveal what he knows about the pension fund money investment.

Among the key questions, said Marais, was whether he ever received reports from the trustees of the textile workers’ provident funds.

“Until Minister Patel speaks on this, suspicions will remain around his credibility and the real reasons for deputy minister Godongwana’s resignation,” said Marais.

Patel previously told the M&G that he had no insight into the movement of provident funds because the boards of trustees was made up of 50% employer and 50% employee representatives who have the fiduciary responsibility to ensure that the best interests of the members of the funds are protected.

“Neither the past nor present general secretary of Sactwu sits on the boards of the provident funds, nor are they consulted about or advised of the decisions of trustees on matters such as loans or specific investments,” Patel said.

“Accordingly, I have no knowledge of the decisions involving Canyon Springs or the status of the Trilinear Empowerment Trust.”