Power to the Cup Nobodies 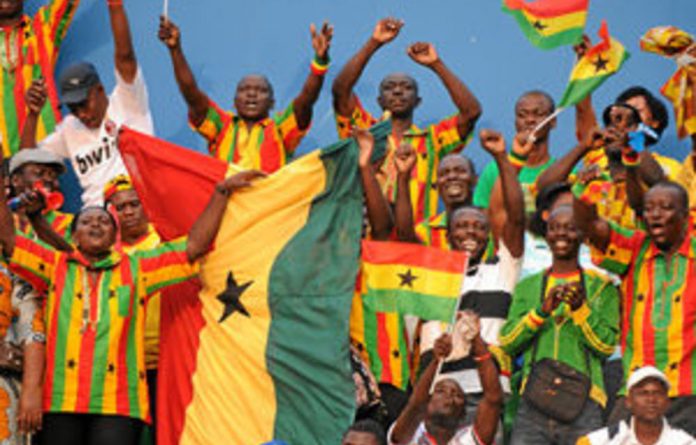 One of the best moments of this Africa Cup of Nations to date was when Botswana skipper Mompati Thuma instructed Asamoah Gyan to stop feigning a near-death experience and stand the hell up.

The Ghanaian striker was incensed that his integrity was being questioned by a knobbly kneed, underpaid extra from Mogoditshane. He sprang miraculously to his feet and charged at the unimpressed Thuma, of the Botswana Defence Force, who has never played club football outside his homeland. Gyan’s gist was that nobodies should know their place.

We will discover tomorrow night where the Zebras’ place really is when they face wounded Guinea in Franceville, before Ghana take on Mali in the other group D clash.

Thuma and company showed impressive resilience and concentration to run the Black Stars close in midweek, losing 1-0 and rattling the victors for long parts of the second half.

John Mensah’s astute professional foul on Jerome Ramatlhakwane, which earned him a red card, might have spared the 2010 World Cup quarterfinalists from being held to a chastening draw by a team that represent just two-million widely spaced somebodies.

On Wednesday, co-hosts Equatorial Guinea served up the first certifiable shock of these finals by evicting Senegal and advancing to the quarterfinals, thus confirming the growing depth of African football.

No such thing as minnows
Minnow-stomping is now a forgotten pleasure for the likes of Gyan and his Black Stars. This narrowing of the gap is good news but it doesn’t appear to be spurring the continent’s leading powers to greater heights of achievement — they’re all fannying about while the ex-nobodies gain ground.

Dark horses Angola and Zambia have secured emphatic wins but none of the pre-tournament favourites has pulled up any trees in the opening eight fixtures.

Many formations have been as cagey as Black Beach prison and an average of just 1.87 goals per game has been scored. With any luck the tally will rise with the teams’ appetite for risk in the final group games but the knockout stages may well bring the fear back.

But if we neutrals are cheering the plucky nobodies like Botswana, should we be cheering the politically incorrect Equatorial Guinea? The co-hosts have a comically mercenary team, their ranks mostly made up of naturalised nobodies from Cameroon, Côte d’Ivoire, Liberia, Brazil, Colombia, Nigeria, Cape Verde and Spain. Only nine of the 23-man squad have any Equatoguinean ancestry; seven of those were born and raised in Spain, the former colonial power.

Mercenary or not, the Nzalang Nacional can play. Inspired by the dangled millions of Teodorin Obiang Nguema, the president’s dandyish son, they first signalled their subversive intentions by defeating the Libyans, who are ranked 88 places above them in the Fifa rankings.

The triumph over Senegal was even more astonishing, with journeyman fullback Kily, of Spanish third-division side Langreo, netting a long-range winner worthy of the Camp Nou.

International anti-poverty activists were quite correct to condemn Obiang junior’s tasteless cash bonus programme ($1-million for a win and $20000 for each goal scored), which mocks the abject misery of most of Equatorial Guinea’s 600000-odd citizens. But vulgarity is the least of the Obiang regime’s sins.

The government in Gabon, the joint host nation, is more credible, simply because Ali Bongo took power only in 2009. But given that Bongo succeeded his father, Omar, who had ruled Gabon for 42 years, Libreville cannot be termed a hotbed of democracy.

By extension, the entire Nations Cup brand has become a bit noxious this month. And the millions bunged at the players are surely chump change compared with the official and unofficial largesse that has inspired Fifa’s and the CAF’s shared crush on oil-rich autocracies in recent years. World football governance has become a well-lubricated love affair, from Malabo to Libreville, Doha and Moscow.

Even Gyan, such a warrior for the cause of African football in 2010, has succumbed to the viscous delights of the petrodollar, deserting the rigors of the premiership for Al Ain’s payday in the United Arab Emirates.

Thankfully, the football itself remains more or less honest. We can keep trusting the basic integrity of the game for as long as onbeskofde (impolite) nobodies such as Thuma are kicking somebodies like Gyan and commanding them to stand up. May they never learn their places.

When giants stop growing and midgets catch up
The present version of the Africa Cup of Nations, missing the “giants” of African football, reminds one of the quip by Arsenal manager Arsene Wenger that “if you eat caviar every day, it is difficult to come back to sausages”.

Wenger was talking about Arsenal fans, used to watching football that might have been conjured up in advanced geometry classes by mathematical geniuses, having to do with functional football played by plodding footballers.

Cameroon, Nigeria, Egypt, Ghana, Côte d’Ivoire and, arguably, South Africa, belong to the top tier of African football. The first four do so on the basis of their near complete domination since the Cup’s inception in 1957. Cameroon has won the Cup four times, Egypt a record six times, Nigeria twice and Ghana four times.

Although Côte d’Ivoire has won it once, in 1992, their inclusion at the top table — like other countries such as Ethiopia, the Democratic Republic of Congo and Sudan — has to do with their football factory, which has given us some of the best players now playing in European leagues. Among them are players such as Didier Drogba and Salomon Kalou at Chelsea, brothers Kolo and Yaya Touré at Manchester City and Gervinho at Arsenal.

South Africa’s place in the top tier is not the result of its exploits in Africa since its return to the international community; its lofty position has been secured by the riches of the Premier Soccer League, one of the most competitive leagues on the continent.

Cameroon, Nigeria, Egypt — defending champions and winner of the last three tournaments — and South Africa are not in the Africa Cup of Nations tournament. Imagine a World Cup tournament in which Spain, Germany, Argentina and Brazil have failed to qualify.

The consequence of the absence has been dire and unwatchable football. We now have to watch a tournament in which Equatorial Guinea play Niger or Botswana play Guinea — matches that are of interest only to the citizens of the countries involved.

Gone are the days when Nigeria played Ghana or Mali faced Egypt — matches in which we saw familiar faces and the standard of football was considerably higher.

There is a case to be made that the tournament does not do justice to the demographics of the continent.

Egypt, 82-million people strong, is not there; Nigeria, at 160-million, is absent; the 50-million-strong South Africa is missing it for the second consecutive time. A third of the continent’s population is not represented at this edition of the Cup. These are teams that would excite not just their compatriots, but hundreds of millions with an interest in the game. Do not get me wrong, there was no plot against the giants.

They failed to qualify because of idiocy and arrogance, sheer ineptitude and ageing teams, with all these factors sometimes converging in sad and ridiculous ways. And the presence of the so-called giants would not have guaranteed exciting football. Anyone who has followed South Africa’s dance of mediocrity, including that infamous celebratory performance, will not cry because Bafana is not in the tournament. We would have been witness to more of the same.

The result is that I have to make do with sausages when all along I got spoilt on caviar. Someone bring back my Beluga. — Percy Zvomuyo