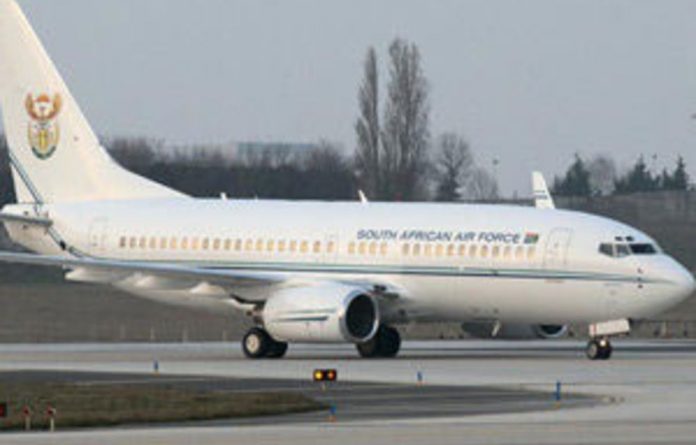 The Bombardier Global Express jet that shadowed President Jacob Zuma on his recent trip to the United States is the same chartered plane that let down his deputy, Kgalema Motlanthe, on two separate occasions last year.

The government’s explanation for the shadowing exercise for Zuma’s flight to the United Nations in New York was that it was a precautionary measure in case the plane he was using ran into technical difficulties.

Civil aviation records show that the aircraft is registered to local company Aralia Trading, which has owned it since August last year. It appears to be on permanent lease to the aircraft chartering operation, ExecuJet, which in turn provided it to the defence department.

Although the Global Express has suffered some hitches, in other respects it appears fit for a king. Its first owner, in 2007 and 2008, was Qatar Amiri Flight, which services the Qatar royal family.

A background check on its registration ZS-AMP revealed that it is the same aircraft that caused a panic during the deputy president’s trip to New Zealand for the Rugby World Cup in September.

A government statement at the time said that it had missed its first landing slot because of a faulty warning light, which indicated a problem with the plane’s tyres or brakes.

Second glitch
It was also the Global Express that developed technical problems before Motlanthe’s October trip to Finland, forcing him to wait for three hours for a commercial flight. But it seems Motlanthe did not return commercially — ZS-AMP was spotted in Copenhagen days later, suggesting it had gone to fetch him.

The same plane was also spotted in Beijing in late September when Motlanthe was there on a state visit.

The repeated use of this aircraft suggests that the department has a contract with ExecuJet for the use of the plane, whether for shadowing or as a primary carrier.

The Democratic Alliance’s David Maynier has estimated that the shadowing exercise cost the taxpayer R10-million.

Scrutiny of the treasury’s tender database shows that there have been a series of contracts for the “hiring of aircraft and helicopters to the state”. Published on August 29 2009, the tender was for a contract to run from December 1 of that year until November 2011.

It was awarded to ExecuJet, with a requirement that ExecuJet had to provide an aircraft to the defence force for VVIP (very, very important persons) use.

Extended
The treasury database does not show that another tender was awarded following the expiry of ExecuJet’s contract but the fact that ZS-AMP was used again to shadow Zuma suggests it was extended.

Meanwhile, an R800-million tender for the provision of aircraft for the transportation of VVIP is currently the subject of a court battle between the department and Nigerian-owned aviation company AdoAir, which claims that the department unfairly rescinded the contract and awarded it to ExecuJet.

Department spokesperson Ndivhuwo Mabaya was controversially quoted as confirming that the tender had been re-advertised and subsequently awarded to ExecuJet.

However, a responding affidavit by defence secretary Sam Gulube disputed Mabaya’s assertion and said that the department was still negotiating the terms of the contract with AdoAir.

Asked whether the plane that shadowed Zuma to the US was the same as the aircraft that caused problems for Motlanthe, ExecuJet’s managing director, Ettore Poggi, said: “I can’t confirm anything.”

Procedures
He took issue with media reports describing the plane as troublesome, saying: “If a warning light comes on, certain procedures have to be followed to prevent trouble. Same with the [Finland] incident. These were safety precaution issues.”

Acting treasury spokesperson Bulelwa Boqwana confirmed that ExecuJet was among the hiring contractors appointed from 2009 to 2011. She said the latest tender advertised last September had not been finalised.

Even though no planes were ever supplied, a company wants hundreds of millions of rands from the military for a contract to supply two aircraft
Read more
Advertising
Continue to the category
Coronavirus