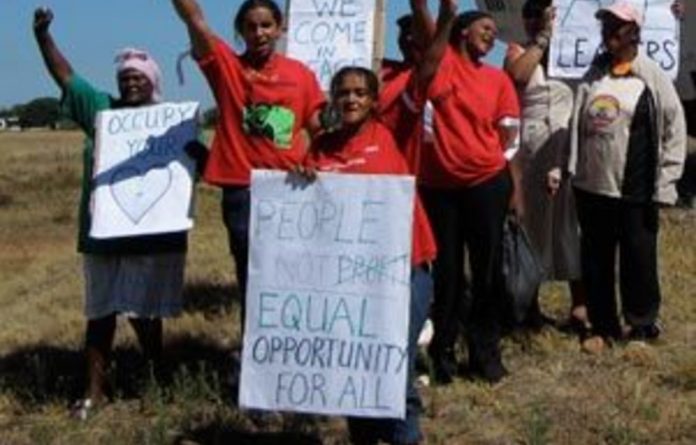 Public violence charges against 41 Cape Town protesters have been withdrawn following their arrest on Friday, when police dispersed an unsanctioned protest being held on Rondesbosch Common.

The 41 demonstrators group appeared in the Wynberg magistrate’s court on Monday morning, after they were arrested last week while taking part in what was deemed by authorities to be an illegal protest, but described by organisers as a “summit” on land, jobs, housing and other issues pertinent to Cape Town’s poor.

To underscore their issues, participants had decided to meet at Rondebosch Common, a public space they said was seen to be the exclusive property of a moneyed and predominantly white elite of the southern suburbs.

The protest itself emerged from encounters between several grassroots organisations, including Proudly Mannenberg. The protesters, unlike in previous Occupy South Africa protests, which had been criticised for being attended mostly by white, middle-class demonstrators, were mostly black and coloured, and from working class backgrounds.

Police had been waiting along the route, for the protesters who were marching to the Common from as far away as Athlone, Mitchells Plain and Kraaifontein.

A total of 41 protesters — of whom 26 were women — were jailed, including organiser Mario Wanza, who was arrested at around 10am while still in Mannenberg. All were released soon afterwards — except Wanza, who had previously been singled out as an instigator by Cape Town mayor Patricia de Lille, and remained in jail until his Monday morning court appearance.

At the common itself, protesters were significantly outnumbered by a police presence of about 200 officers, who used water cannons loaded with blue dye to disperse the gathering. When protester Niall Reddy questioned the police about which law was being violated, police cited a court order, but were apparently unable to produce any documentation.

According to the Freedom of Expression Institute’s Na’eem Jeenah, the Democratic Alliance-run Cape Town has a history of denying citizens the right to assemble.

Christopher McMichael, who has written on both the DA’s response to dissent and “securitisation” in the country, said the Cape Town authorities’ actions were “indicative of the police response to the Occupy phenomenon throughout the world”.

“They have shown how they can keep up with the ‘world class’ standard set in Oakland or New York,” said McMichael. “The response was based upon a militarised outlook of pre-emption.”

Jane Duncan of the Rhodes University Journalism and Media Studies department said that such attitudes towards public gatherings were not exclusive to a single party: “It has become patently obvious that local authorities are manipulating the RGA [Regulations of Gatherings Act] to frustrate gatherings, rather than enable them, and that this cuts across ANC and DA-controlled municipalities”.

‘Agents of division’
While supporters of the protest argued that their meeting posed no threat to public safety, the city had declared the movement a threat.

De Lille described the protesters as “agents of division” and singled out Wanza, as someone who will “act destructively, who will undo the good work of others to pursue selfish political motives“, describing him as a “would-be but failed public servant who claims to speak on behalf of the people of the Cape Flats”.

De Lille further claimed that Wanza was allied to her former mayoral rival in last year’s municipal election, councillor Tony Ehrenreich. Ehrenreich, who also leads Cosatu in the province, later showed up at the protest offering to help to those arrested, before being shouted down by angry protesters who claimed he was attempting to hijack the protest on behalf of Cosatu and its alliance partner, the ANC.

According to protesters, neither Cosatu nor Ehrenreich was involved until he showed up on the day of the protest. Organisers had decided not to back any particular political party.

Richard October, a Cape Town-based community activist and member of Occupy Cape Town was among those taken into custody: “I got arrested when four big policemen were being brutal to a 19-year-old girl, I confronted them about their excessive behavior and they arrested me.”

Fiery Khayelitsha pastor Xola Skonsana claimed that he had “escaped imprisonment by the skin of my teeth, saved by the clerical shirt and the religious look … they sprayed some blue substance on our clothes, I’m tempted to say that’s DA Blood.”

Organisers of the protest said they would lodge a complaint with the South African Human Rights Commission on Monday, claiming that the city’s show of force was “overkill” and “illegal”. — Additional reporting by Sapa

Benjamin Fogel is a freelance writer, he can be contacted at [email protected]