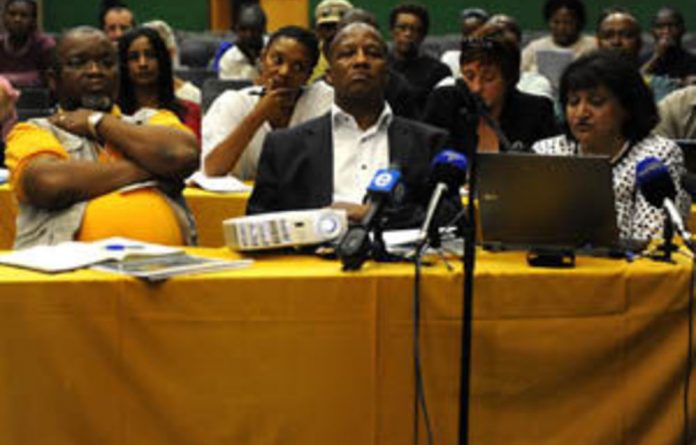 Newspaper editors sounded a strong warning about the consequences of being seen to regulate the press on the second day of the Press Freedom Commission hearings.

“The introduction of a statutory media appeals tribunal would be the death knell of a free press in South Africa,” said editor of the Star, Moegsien Williams, on Tuesday.

Speaking in the stuffy afternoon heat in Braamfontein, Johannesburg, Tony Howard, CEO of the Independent Group, said any hint of regulation or government interference in editorial decisions would “destroy our credibility”.

With most of the audience having left on the coat-tails of the ANC delegation in the morning, the cavernous meeting hall had a sprinkling of journalists and speakers awaiting their turn.

The afternoon session of the hearings was dominated by editors, after the morning’s submission by the ANC’s secretary general Gwede Mantashe. The editors stood staunchly behind press self-regulation.

Nic Dawes, editor-in-chief of the Mail & Guardian, talked to a “clash of paradigms”, with one side saying the press ombudsman “lacks teeth” and the other talking of how scared journalists are of the ombudsman because he is so effective.

He argued that South Africa’s press already has a system of co-regulation which gives representation to citizens and people with media experience.

While some discussions about financial sanctions were mooted, Dawes said, “Giving up space and credibility is a powerful sanction.” With repeated offences a newspaper will begin to lose credibility, readers and profitability, he said. He said he remained “agnostic” to the idea of fining but that he could “see the symbolic appeal”.

Ferial Haffajee, editor-in-chief of City Press, said newspapers stand a better chance in court than with the ombudsman. “You take your chances and you very often get smacked.” This system didn’t not work for her, she said, because it seemed to rule against newspapers more often than not. But the fact is she has to obey the decisions and her fighting against them, shows that the ombud is working, she said.

Self-regulation must stay, but have some changes to strengthen its procedures and public standing, said Haffajee. While many of the attacks on the press have not been based on investigation or “intellectual scrutiny”, she said, they are still “chilling”. With regulation will come the death of investigative journalism: “If you remove the sting, you kill the bee,” she said.

While the ANC argued that a press regulatory system should be like the Chapter Nine institutions — Independent Electoral Commission, the auditor general and the public prosecutor — Haffajee pointed to the length of time and controversy it took to get them running.

Director of Media Monitoring Africa, William Bird, said his organisation had conducted exhaustive research into the media and it “tends to get more things right than wrong”. While there may be problems, he said, the only way to improve quality and ethics was “under a free press”.

Bird lauded the moves by the M&G and City Press to open investigative units even in a time of financial stress.

Ahead of travel season, Wednesday’s fuel price hike will push the price of petrol – around R19.50 a litre – to above R20 in Gauteng and other inland provinces
Advertising