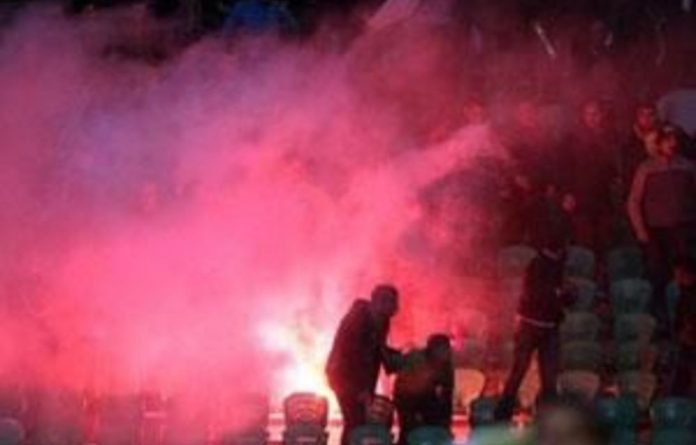 At least 74 people were killed and hundreds injured when rival fans clashed on Wednesday after a soccer match in the Egyptian city of Port Said, in what Fifa called a “black day for football”.

In one of the deadliest incidents in the sport’s history, violence erupted as soon as the referee blew the final whistle in a match which saw home team al-Masri beat Cairo’s al-Ahly 3-1.

Photos of bleeding players circulated on the internet.

Gunfire was also reported on the main road leading to Port Said from Cairo, and troops were deployed to prevent further clashes.

“The death toll has now reached 74, including one policeman, in the unrest after the match between al-Ahly and al-Masri,” the health ministry said in a statement.

“Most of the people were killed in the crush,” Interior Minister Mohammed Ibrahim added, while medics said some of the deaths were the result of stab wounds.

Poor security
State TV said around 1 000 people were injured in the violence but the interior ministry put the number at 248.

The clashes in the north city — blamed by the Muslim Brotherhood on supporters of fallen president Hosni Mubarak — came as the country struggles with a wave of incidents linked to poor security.

Shops in Port Said, which sits at the entrance to the Suez Canal, shut their doors as private cars helped to shuttle the injured across the city to hospitals.

Politicians, fans and players took to social media to express their fury over the violence which caps a year of political upheaval and unrest after the uprising that unseated Mubarak.

“I won’t play football anymore until these people get justice,” a furious Meteab said.

Egypt’s hated police force had recently come under fire for its heavy handed tactics and had been given instructions to deal carefully with protesters, sources said.

The interior ministry said 47 people were arrested, as the prosecutor general ordered an immediate investigation into the violence.

Shortly after the clashes, the army deployed troops in Port Said “to prevent further clashes between fans of al-Ahly and al-Masri,” state TV reported, adding the military had secured the road out of the city.

Egypt’s military ruler, Field Marshal Hussein Tantawi who took power when the veteran Mubarak was ousted in a popular uprising last February, sent two military planes to Port Said to fly out the players and the injured, state TV reported.

He stressed that the country’s security “is fine” as he waited at an airport in east Cairo to meet the players and wounded fans.

‘Black day’
In Geneva, Fifa president Sepp Blatter said he was “very shocked and saddened to learn this evening that a large number of football supporters have died or been injured”.

“This is a black day for football. Such a catastrophic situation is unimaginable and should not happen,” he said.

Prime Minister Kamal al-Ganzuri was to hold an emergency Cabinet meeting on Thursday to discuss the events.

Politicians in Cairo expressed fury at the deaths, with newly-elected liberal MP Amr Hamzawy calling for the sacking of the interior minister and Port Said’s governor and security chief.

“The events in Port Said are planned and are a message from the remnants of the former regime,” said MP Essam al-Erian in a statement on the Islamist group’s Freedom and Justice Party website.

“This tragedy is the result of negligence and the lack of army and police, and those running the country bear the responsibility,” Erian added. “There are those who deliberately want to sow chaos in the country and place obstacles in front of the peaceful transfer of power.”

More unrest
Parliament speaker Saad al-Katatni, a member of the Muslim Brotherhood, said the People’s Assembly would hold crisis talks on Thursday at 11am (9am GMT).

In the capital, meanwhile, a fire broke out at Cairo Stadium during the first half of a match between Zamalek and Ismaili clubs, prompting officials to cancel the fixture, but emergency services managed to control the blaze, a security official said.

Since Mubarak’s ouster, Egypt has seen sporadic and sometimes deadly unrest coupled with a sharp rise in crime linked to the scarcity of the unpopular police, who were heavily criticised for their crackdown on protesters during the uprising.

In September, Egyptian soccer fans clashed with police in a Cairo stadium, injuring nearly 80 people, as they chanted slogans against Mubarak and his interior minister — both now on trial for the killing of protesters during the uprising. — AFP