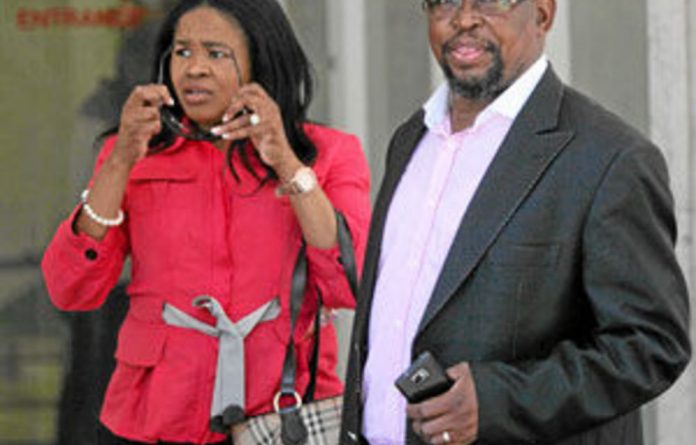 Former deputy minister of economic development, Enoch Godongwana, allegedly misled the Canyon Springs Investments 12 insolvency inquiry while giving evidence last year when he failed to disclose that he had received money from companies belonging to Richard Kawie, who has been charged with fraud in the scandal over the misappropriation of clothing factory workers’ pension fund cash.

“If you compare what he said on the first occasion to what he said the second time around, of course he lied to us,” said Tony Canny, a partner in forensic law firm Eversheds.

Canny has been leading the team unravelling the whereabouts of the missing R100-million of pension fund money that was sunk into Canyon Springs on the strength of a verbal agreement. Not a cent of the money was ever repaid by Canyon Springs, which is 50% owned by Godongwana and his wife, Thandiwe, in a family trust.

Scrutiny by the Mail & Guardian of transcripts of Godongwana’s evidence on the two occasions he testified at the inquiry presents a conflicting picture.

In October last year Godongwana was quizzed during the inquiry by Gavin Woodland SC about his annual salary as chairperson of Canyon Springs, which was not reflected in the company bank accounts as being paid in full. In his evidence, Godongwana confirmed that an amount of R1.584-million was the salary he received at Canyon Springs.

But Woodland, who is acting for the Southern African Clothing and Textile Workers’ Union (Sactwu), pointed out that only about R598 000 was paid to Godongwana from the Canyon Springs bank accounts.

“My suspicion is that there would be some times when there was no money in Canyon Springs and we didn’t get paid,” explained Godongwana at the inquiry. “I suspect that could have been the rational explanation.”

“And were you being paid from another source?” asked Woodland. “No,” responded Godongwana.

That was his evidence three months ago, yet the inquiry’s legal team has, in the interim, subpoenaed damning bank records of Kawie’s companies, Eclipse Capital and Empirax Investments. The evidence of Godongwana’s payments from “another source”, or rather Kawie’s companies, now appears indisputable.

A respected former trade unionist, Godongwana was summonsed again to the inquiry and asked to explain a mystery R510 000 banked cheque made out to E & T Godongwana.

The cheque was issued by Eclipse Capital, a company run solely by Kawie, but Godongwana said he could not recollect receiving the R510 000 cheque or banking it.

In explanation of the money that the subpoenaed bank records reveal he received from Kawie’s companies, Godongwana told the inquiry last week that he and Kawie had been in the habit of lending each other money without drawing up loan agreements.

The bank records of Empirax reveal that Godongwana was paid an amount of R710 000 in four separate amounts over four months, between December 2008 to March 2009.

Godongwana received another R710 000 from Eclipse Capital in five separate amounts from April 2007 to August 2008.

Appearing in good spirits when he gave evidence, Godongwana disputed Kawie’s testimony to the inquiry that his “loans” from Empirax and Eclipse Capital were meant to conceal from Parliament his undisclosed Canyon Springs salary. He said Kawie’s statement did not make sense because Thandiwe took over when he resigned as director of Canyon Springs in 2009.

Godongwana told the inquiry last week that he had entered the business in good faith and had not known it was a scheme. “I would never have wanted to take their pensions,” he said.

A focus of the inquiry’s lawyers will now be to try to recover money from Godongwana, who offered at the inquiry to repay any money he and the investigators agreed he should not have received.

Godongwana was contacted by the M&G for comment this week about Canny’s claims that he had allegedly lied to the inquiry and was asked whether he knew he could possibly face criminal perjury charges, should Sactwu decide to pursue the matter in future.

“I know nothing about that,” Godongwana said before disconnecting the call.

Forensic investigators involved in the inquiry have suggested that Kawie’s companies could have been used to launder money.

The bank records allegedly show that Kawie used borrowed pension fund money that was never repaid to fund a lavish lifestyle, including shopping trips to popular British department store House of Fraser, dining at top restaurants and the purchase of properties and luxury vehicles, investigators say.

The scandal has led to the arrests of both Kawie and Sam Buthelezi, the owner of asset management company Trilinear, on fraud charges relating to the missing money. They were both released on bail.

The M&G has reliably learnt that the commercial crimes unit, which falls under the Hawks, has now begun conducting a full-scale investigation into the Canyon Springs scandal and will examine the roles of all involved.

After his shock resignation from his high-ranking post two weeks ago Godongwana’s political future appears uncertain. He faces criminal charges laid against him by the Democratic Alliance for failing to disclose to Parliament his interest and benefit in Canyon Springs.

DA economic development spokesman Kobus Marais said it was a good gesture by Godongwana to pay back some of the money, but he was obviously simply trying to clear his name.

“Enoch Godongwana’s excuse is that he was not aware of the scheme, but it is obvious he knew what was happening,” he said.

“As a director with a large shareholding in Canyon Springs, it is unacceptable for him not to have known what is going on. And when the person was deputy minister of economic development, where does that leave the country?”

Trilinear owner’s lawyer fights cash heist charges
When the owner of asset management group Trilinear, Sam Buthelezi, refused last week to testify at the Canyon Springs insolvency inquiry held at Pollsmoor Prison because his legal representative was not present, the focus shifted to questions about why the lawyer had been unavailable.

Buthelezi’s lawyer, Rooshdeen Rudolph, told the Mail & Guardian he had not been given instructions to appear with his client in prison and had been attending another criminal matter in Mitchells Plain.

Buthelezi has been charged with fraud in connection with R100-million of misappropriated clothing workers’ pension fund money and has since been released on bail.

Attention soon fell on his Elsies River lawyer for another reason, after the M&G established that Rudolph had been criminally charged for his alleged involvement in a cash heist at the OR Tambo International Airport in Johannesburg in 2006.

Rudolph said the case against him and his brother, Shaheed, was initially withdrawn after a directive from the director of public prosecutions, but they had subsequently been recharged.

“We are innocent of any crime and the charges against us were thrown out as they were based on evidence given by a co-accused, which is inadmissable,” said Rudolph. “We each lodged claims against the police for R15-million and they are pursuing us because of this and have now recharged us. They have no new evidence.”

However National Hawks spokesman Colonel McIntosh Polela said the police had strong evidence to support the charges against the Rudolph brothers.

“We have a very strong case against the two brothers,” said Polela. “The fact they have been recharged has nothing to do with them suing the state.”

A gang of twelve people was accused of stealing about R100-million in foreign currency from a South African Airways cargo plane at the airport six years ago. The money recovered was later stolen from the Benoni police station by another gang.

In a court judgment in the South Gauteng High Court in Johannesburg, following an unsuccessful application by the Rudolph brothers to have the charges against them set aside, the M&G learned that the brothers were granted bail after having spent an astounding 90 days in prison.

It also confirms that the charges were initially withdrawn because the only evidence incriminating them was contained in confessions of the co-accused, which would have been inadmissable as evidence.

Although some of the accused claimed that the brothers were the masterminds behind the heist, Rudolph this week dismissed this allegation as “utter fabrication”. The case is still being heard in Gauteng and Rudolph said he would not step down from his legal work until the case was concluded, because he was “an innocent man”.

Rudolph said he had been “upfront” with Buthelezi about the case against him, but the man once hailed as a financial whizz had insisted he wanted to retain him.

But lawyer Tony Canny, who is acting on behalf of the Southern African Clothing and Textile Workers’ Union, which is running the Canyon Springs inquiry, said it had now been decided that Buthelezi would be charged with contempt of court for disobeying a court order compelling him to testify.

“It is unconstitutional, because he needs legal representation and we will defend him. They must just arrange a date for him to appear at the inquiry that suits all parties.” — Glynnis Underhill