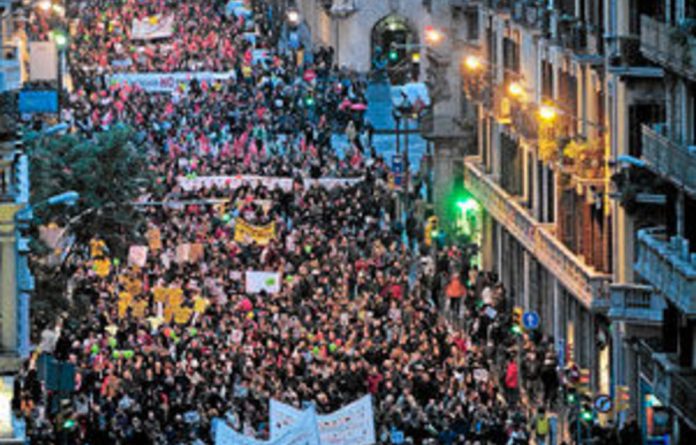 Pressure on European Union leaders to relax their insistence on strict austerity measures intensified this week after Spain revealed its economy contracted in the past three months of 2011 and the cost of insuring Portugal’s debt soared to a record high.

Spain’s output dropped by 0.3% during the fourth quarter of 2011 compared with the previous three months, according to official data, confirming the view of Prime Minister Mariano Rajoy that the economy is sliding into recession.

The figures followed unemployment data last week that shocked EU politicians — a 350 000 rise in the total out of work, taking the jobless rate to 22.8% and more than five million.

Madrid said it wanted officials in Brussels to discuss how countries such as Spain could grow before any agreements were reached on further austerity measures.

The Spanish economy is expected to slide further in the first quarter of this year, placing Spain in its second recession in less than three years. A technical recession is defined as two consecutive quarters of contraction.

The figure announced by the National Statistics Institute broke a run of seven quarters without economic contraction. Compared with a year earlier, gross domestic product rose 0.3%, the institute said. For all of 2011, it increased 0.7%.

Portugal’s slide towards a Greece-style second bailout accelerated after its principal private lenders indicated they are growing weary of assurances from Lisbon that it can get on top of the country’s debts.

Banks and others offering default insurance to holders of Portuguese sovereign debt have begun demanding huge up-front payments rather than allowing costs to be spread over the term of the contract. This means that it cost €3.95-million to insure €10-million in bonds over five years, which is payable now.

Analysts said it made Portugal the second-highest sovereign state to insure in the world, after Greece, and implied a huge lack of confidence in market circles about Lisbon’s future.

Portugal’s 10-year bond yields surged on Monday to just under 16%, more than twice the level that is generally considered unsustainable.

John Higgins and Ben May, economists at Capital Economics, said Portugal would be forced out of the single currency, probably next year. Capital Economics has already predicted Greece will leave in 2012.

“The surge in yields in Portugal, which has taken place since the country’s credit rating was lowered to sub-investment grade earlier this month by Standard & Poor’s ratings agency, reflects growing scepticism that private-sector involvement in eurozone sovereign debt restructurings will only be applied in the case of Greece,” they said in a report.

Business and consumer confidence nudged higher on average across the EU despite the fall in Portugal, though analysts were hard-pressed to explain why sentiment had improved this month against a backdrop of huge anxiety — negotiations continued in Athens over the fate of Greece and talks over closer fiscal unity were undermined by Britain’s use of its opt-out clause. —