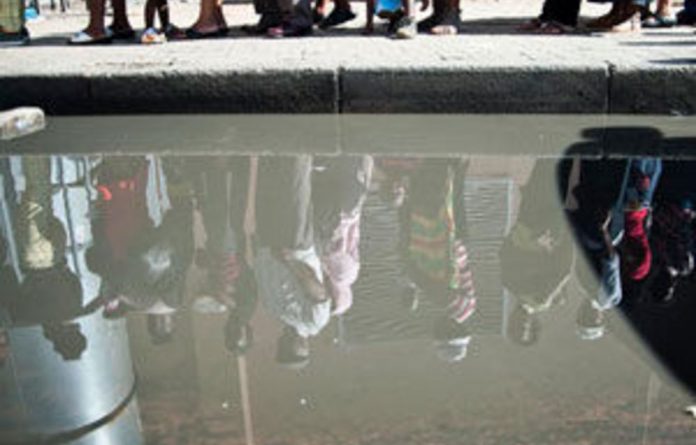 It’s social-grant payout day near the Noord Street taxi rank in Joubert Park and the queue outside the payout point, a Boxer Superstore, stretches as far as the eye can see. People stand in the relentlessly hot sun for hours and only some are lucky enough to be shielded by an umbrella or a hat.

Social grants are a bonanza for retail stores that act as payout points for thousands of South Africans every month. But Social Development Minister Bathabile Dlamini has taken issue with how some shops are taking advantage of grant recipients on payout days. The M&G joins the queue at a Joubert Park superstore to see what’s going on.

Pensioners avoid the discomfort and are allowed to jump the queue while the rest, largely young single mothers, patiently wait to collect their child-support grants.

Nthomfuthi Dlamini, an unemployed single mother of three, stands in this queue each month. She says the wait can take anything from an hour or two to an entire day. Dlamini will receive R810 today, R270 for each child.

The payout points can give out money on other days of the month, but recipients are desperate.

“We are suffering,” Dlamini said. “It is the end of the month and we need the money to pay school fees and rent.”

Minenhle Siphesihle, also an unemployed single mother, joined the queue at 6am and reached the front at 10.30am. She only collects a grant for one child.

As the day goes by and people finish work the queue grows longer.

More than 600 people will collect their grants on the first day; the rush will continue on the second day and taper off as the week wears on. Over this period, security at the supermarket is beefed up and staff work night shifts (6pm — 6am) to restock the shelves. The result for this Boxer store is that trading revenue is often 10% higher than on other days of the month, said store manager Philmon Ncongwane.

Recipients are identified by fingerprint scans and the grant is then loaded on to a bank-type card. The recipients are encouraged to spend 10% of their grants on goods in the store before the remainder is withdrawn as cash from the tills.

Spending on social-grant payout day at Boxer is bigger than on payday
Andrew Mills, director of Boxer Superstores — part of the Pick n Pay group — said spending on social-grant payout day at the 95 Boxer outlets in South Africa was bigger than it was on payday. He said recipients who lived in remote areas often did all their shopping after collecting their grants at a store to save on transport costs.

Mills added that Boxer consumers were “wise” and the stores tried to offer promotions on pension-payout days to discourage people from shopping elsewhere.

“It’s definitely the biggest trading day of the month. It changes the entire complexion of the store over that time.”

Spar has 850 stores throughout South Africa and, like Boxer, almost half are located in rural areas. Many Spars are payout points for the grants, although the biggest spikes in spending are seen in rural areas. Preparation for payout days involves extra staff at certain stores, Prentice said, and shelves are restocked with top-selling items such as rice, maize, long-life milk and airtime.

Social-grant payouts totalled close to R100-billion in 2011. More than half was for child support and the remainder was largely for old-age pensions and disability grants.

The South African Social Security Agency, which is responsible for administering the grants, spent approximately R2.4-billion administering the payment of grants in the past financial year because only 37% of beneficiaries used banks.

Grant beneficiaries who receive their money through bank accounts are liable for the charges associated with those accounts, the agency said. However, many grant recipients use Mzansi saving accounts, which include a bundle of free basic banking services.

Apart from beneficiaries who collect their money through bank accounts, an additional 10% are paid through a customised banking solution known as Sekulula.

This is a product that is offered by Allpay (one of the cash-payment contractors), which facilitates the withdrawal of grant money from ATMs and lessens the burden on cash paypoints.

The agency recently awarded a tender to a new payment service provider that will help to overhaul the system at a significantly reduced cost over five years.

But there are deeper problems that technology cannot fix. Dlamini described driving through a small Eastern Cape town at 4am where people were already queuing outside the banks.

“It’s not about the banks; it’s about the mentality of our people. When it comes to money they want to withdraw the whole amount. They don’t trust that the money will still be there [in the bank] tomorrow.”

She said the social development department needed to design solutions suited to each province and look closely at the mix between rural and urban recipients. For example, the rural population of the Western Cape (16%) contrasts starkly with those of Limpopo (88%) and KwaZulu-Natal (76%).

Dlamini said the department also needed to focus on how to foster economic opportunities in relation to social grants, particularly in rural areas. There has been a discussion over the years aimed at combining the various social security agencies into one super-agency. The minister described this as “comprehensive social security”. All social benefits, such as those falling under the department of labour (workmen’s compensation and the Unemployment Insurance Fund) and department of transport (the Road Accident Fund) could be administered under one roof, leading to savings on administration costs.

“We are busy with that process now,” said Dlamini, adding that the proposed national health insurance scheme would also be included under such an agency.

“Cash-payment companies are responsible for the arrangement. We found that these companies were working with the provinces and had agreements with them.”

Net1, a cash delivery service provider, facilitates the arrangement with the retailers and from it all money is recouped.

“We have no relations with ­government. We recoup our ­monies from the service provider, Net1, [which is contracted to the government],” said Andrew Mills, director of Boxer Superstores.

Dlamini said the department was concerned that those drawing their money from retailers were not given the full amount and were obliged to buy a certain amount of goods at these stores.

“The retailers are only interested in money, not the quality of food our people eat. We don’t mind communities coming to this kind of agreement, but not when they are forced into it.”

But Mills said customers were encouraged, not obligated, to spend 10% in the store at the month’s end. “They do their shopping at the same time, because it is more cost-effective for the customer and saves in transport costs.”

Legaisamang Mmelesi, an unemployed single mother of two standing in the social-grant queue at the Boxer store in Hillbrow, said she was happy to spend 10% of the fee in-store.

“It is their right because they are making the effort to hand out the money,” she said.

Boxer also offers a safer alternative to cash delivery vans, which have experienced armed robberies in the past. “There is a risk associated with distributing social grants,” Mills said.

For every rand drawn, Boxer must also pay a few cents back to Net1 for using its equipment.

Mills said the service was provided even though turnover was not guaranteed to increase. “But that is how Boxer is positioned in the community. We are the people’s superstore.”

Mike Prentice, Spar’s group marketing executive, said its customers were not expected to buy in the store. “It is not even implied,” he said. “People just tend to do their shopping there anyway.”

The fees cost each store 0.25% of the total payout, he said, but the resulting revenue surge more than made up for it.

An estimated two-thirds of malaria deaths are among children under the age of five, most of them in Africa.
Advertising