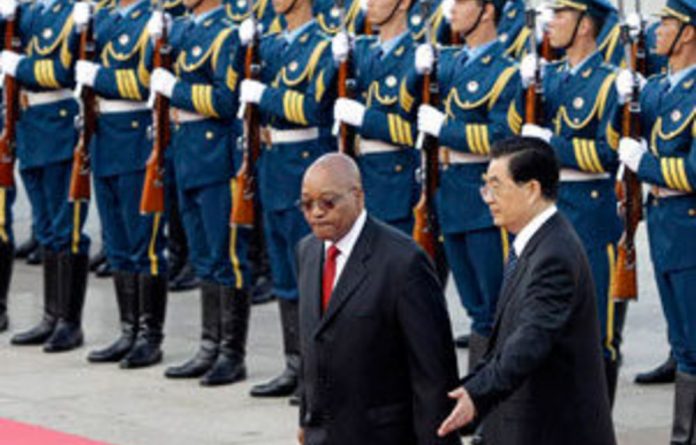 President Jacob Zuma is likely to look East with his State of the Nation address in Cape Town next Thursday. A new focus on infrastructure, similar to the Chinese model of state capitalism, will be the centrepiece.

Worth R1-trillion and aimed at being the catalyst for job creation, the new infrastructure-driven model will overhaul parastatals and place them under one department and take control of strategic assets in the economy to meet the government’s new growth path target of five-million jobs by 2020.

This is also at the core of the ANC’s new economic transformation policy documents that will be tabled at the party’s national executive committee meeting, which started on Thursday and ends this weekend.

The idea is that the private sector has failed to invest in infrastructure to stimulate economic growth and the state needs to play a more activist role in the economy. Lack of investment in infrastructure over the past years is believed to have stunted South Africa’s growth.

The state capitalism approach is not new. It was first punted in the ANC’s 1992 “Ready to Govern” policy document prepared by former Reserve Bank governor Tito Mboweni. However, it was abandoned during the neoliberal paradigm of the late 1990s when former president Thabo Mbeki introduced a more free-market model.

But the revival of the state capitalist model using state-owned enterprises (SOEs) is at the heart of the government’s new drive for a developmental state. One of the interventions is to place all state-owned enterprises under one umbrella, although this is likely to create tension in the Zuma administration over control of resources. Already there are suggestions that the parastatals under Public Enterprises Minister Malusi Gigaba should be returned to line function departments.

Even the National Planning Commission has proposed a joint ministry model within the department of public enterprises, or the treasury, to improve the services provided by the SOEs, including their financial sustainability. The presidential review committee on state-owned enterprises, chaired by Rhia Phiyega, is expected to give a report on the role of SOEs to Zuma by the end of March.

In an interview with the Mail & Guardian, Gigaba outlined why South Africa needed to move closer to the Chinese model. “If you look at the developmental state that we have in Southeast Asia or even Norway, they reached the level of development because the state played an active part in the economy. It didn’t sit back and say to the private sector that all we do is establish regulation,” said Gigaba.

“If we had to rely on the market forces today and just say let the state pull out and let the state privatise the SOEs, you will not be able to achieve the transformation that we envisage. For us, SOEs have a critical role to play in rolling out infrastructure, in reducing the cost of the business, creating employment, industrialising the country and developing skills. That’s why we have put these three issues at the centre of SOEs.”

The importance of SOEs in infrastructure expansion is being set out by the Presidential Infrastructure Co-ordination Commission created last July. Headed by Zuma, the commission includes some economic cluster ministers, chief executives and chairpersons of the strategic parastatals such as Eskom, Transnet and the Passenger Rail Association of South Africa (Prasa), Sasol and ArcelorMittal South Africa.

National Planning Commission looking at how SOEs can finance infrastructure projects
The commission is working on different models on how SOEs can fund big infrastructure projects, given the budgetary constraints and the magnitude of the backlogs. Local development finance institutions, such as the Industrial Development Corporation (IDC), the Development Bank of Southern Africa (DBSA) and the Public Investment Corporation (PIC), are being roped in to fill the funding gaps that have delayed important projects such as the Medupi power plant in Limpopo.

“There has to be such co-ordination with the private sector and the development finance institutions; we can’t just utilise the state’s balance sheet for infrastructure development,” said Enoch Godongwana, head of the ANC’s economic transformation committee.

Medupi alone is being built at a cost of about R100-billion, whereas the Kusile power station near Witbank in Mpumalanga is costing R45-billion. Eskom has secured about 80% of the funding from the World Bank and other institutions, but still has a combined shortfall of about R28-billion for the power stations. Through the commission, Eskom is now negotiating with the IDC and DBSA to fund some of the shortfall.

Transnet is also facing funding constraints. Ailing rail infrastructure, backlogs and delays at ports have been cited by the treasury in the medium-term budget statement as hampering growth and killing the mining industry.

One of the biggest gripes of coal companies over the years has been a lack of capacity on rail lines to export their products. Eskom, which is in the middle of a supply-and-demand crisis with the lights expected to go out by April (see Business section), is also experiencing similar problems with Transnet in that they have to get coal from the mines to the power stations. It has now decided to fund some of the new rail lines, particularly Majuba in Mpumalanga, to feed Medupi.

Other infrastructure projects that Zuma will likely touch on in the State of the Nation address include Prasa’s rolling-stock renewal programme, the building of new universities in Mpumalanga and the Northern Cape, and the construction of hospitals in Limpopo and Mpumalanga.

Prasa chief executive Lucky Montana said the agency was undertaking a massive rolling-stock fleet renewal programme. “This will acquire a new fleet of passenger rail coaches over a 20-year period, at an estimated cost of R137-billion, covering the trains, new depots and signalling, among other critical infrastructure. The fleet renewal programme will create approximately 65 000 jobs.”

But investors fear that state capitalism could be more detrimental to the economy than nationalisation, which has been put on hold for now by the ANC despite its youth league pushing for it.

In the ANC’s economic transformation policy documents, the researchers discourage a crude form of nationalisation and propose resource nationalism, where the state takes a greater stake in companies that have strategic assets or minerals, and imposes increased royalty taxes and exports taxes on minerals to encourage beneficiation. The proposals could still be rejected at the ANC policy conference in June.
“The Chinese model of building infrastructure and growing jobs will be a key focus of the ANC’s economic policy,” said Godongwana.

While Gigaba’s plan has raised eyebrows in the private sector, Transnet Freight Rail CEO Siyabonga Gama said this week: “If you want better co-ordination, the Chinese route is not a bad idea to have SOEs under one umbrella. Each one can be given a mandate, for example, to create jobs and new business opportunities and making sure there is technology in rural areas.”

With the crisis of liberal capitalism in the developed world, the Economist magazine recently published a major analysis of state capitalism, which it said had helped grow emerging market giants such China, but also posed serious risks

Malaysia, Russia and more recently Brazil have successfully made the state capitalist model work in stimulating economic growth and job creation. According to the Economist, about 80% of the market capitalisation of Chinese stock markets consisted of state-owned companies.

Gama advocated this model. “This is not about who owns what but what’s best for the country. Ministers come and go. This should not be about controlling resources but what works for the country.”