ANCYL hopeful that Malema will walk away unscathed 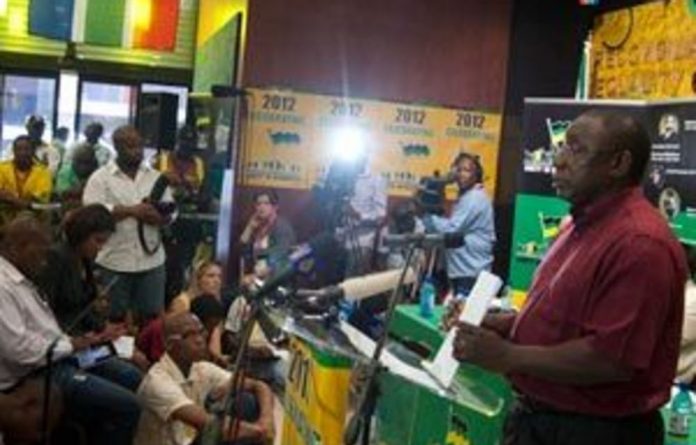 A ruling by the the ANC National Disciplinary Committee (NDC) of Appeals on ANC Youth League president Julius Malema has failed to clear the air for the South African public, who wanted to know whether Malema was suspended from the party or whether he was provided a lifeline.

The NDCA announced its decision to uphold the suspension of Malema and two other youth league officials and clear three others on Saturday. It also allowed those found guilty a chance to offer mitigating evidence to the NDC.

Some commentators feel the ruling signifies an end to Malema’s political career. They believe that being allowed to advance arguments in mitigation will not save him from expulsion. Malema was previously sentenced to a suspended expulsion two years ago, which should kick in following his sentence.

However, the youth league sees the decision of the NDCA as a victory. It effectively allows the four officials who were cleared of the charge of barging into a meeting of high-ranking ANC officials — deputy president Ronald Lamola, treasurer general Pule Mabe, secretary general Sindiso Magaqa and deputy secretary general Kenetswe Mosenogi — to keep their positions.

However, the NDCA upheld Magaqa’s second sentence that orders him to publicly apologise to Public Enterprises Minister Malusi Gigaba for issuing a derogatory statement after Gigaba differed with the league’s call for nationalisation of mines. The Mail & Guardian understands that Magaqa is prepared to comply with the order, failing which a suspended sanction of 18 months would take immediate effect.

The youth league, in its argument to the appeals committee, argued that the NDC’s failure to grant it the opportunity to present mitigating evidence was an indication that the case was politically motivated.

Chairperson of the NDCA, Cyril Ramaphosa, said: “As prayed for by the appellants, the matter is referred back to the NDC to determine the appropriate sanction after hearing evidence in mitigation and aggravation of sanction that the parties may wish to present. Such a hearing shall be concluded by the NDC within 14 days from date hereof and the NDC is directed to provide appropriate guidelines to the parties for the expeditious finalisation of the process.”

Reduced sentences
Given that the barging charge was dropped, the youth league is hopeful that Malema and spokesperson Floyd Shivambu’s sentences will be reduced. The youth league is expected to argue that Shivambu, who was found guilty of swearing at a journalist and issuing a press statement calling for a regime change in Botswana, should be given a more lenient or suspended sentence, given that he is a first-time offender.

Malema is also expected to argue for a reduced sentence, based on the fact that he had already shown remorse on the Botswana charge by publicly apologising to the ANC.

Malema and his fellow youth league leaders were leading a campaign to oust ANC president Jacob Zuma and the party’s secretary general Gwede Mantashe. They seek to replace them with Deputy President Kgalema Motlanthe and Sports Minister Fikile Mbalula respectively.

Despite the league’s failure to convince the appeals committee that NDC members Science and Technology Deputy Minister Derek Hanekom, Minister in the Presidency Collins Chabane and Mineral Resources Minister Susan Shabangu were biased, Malema is still expected to ask for their recusal during the mitigation and sentencing hearings.

A youth league NEC member who asked not to be named told the M&G that the youth league is adamant that the three officials were biased.

“We are going to ask if there will be fairness during mitigation and sentencing if the three are part of the NDC. What assurance do we have that they will be fair this time around?” asked the league leader. He said that the league’s NEC meeting scheduled for next week would reject the outcome of the appeal hearing, since they believe that Malema is innocent.

“We don’t agree with the outcome. We are going to fight to the bitter end.”

It is understood that Mantashe tried to convince the NEC meeting not to endorse the newly-elected provincial executive committee, led by embattled Limpopo premier Cassel Mathale, as a result of alleged irregularities. Mathale is a close ally of Malema’s, who was elected to the Limpopo PEC.

Some ANC leaders have described the decision to reject Mantashe’s proposal as an indication that the balance of power within the party’s powerful executive committee is shifting towards Mbalula.

Reacting to the appeal committee’s decision, former ANC provincial secretary in Mpumalanga Isaac Mahlangu said: “Much attempt to arrive at a progressive outcome was meticulously made. But I am sure even the most brilliant first year law student would struggle to understand why the five-year sentence is upheld when aggravating and mitigation arguments are still to be canvassed. For the young people in the ANC this has been a very hard political induction, from here we will never falter. History will find us the most tried and tested of the ANC.”

Lamola is now touted as a possible successor to Malema, which could see the league retain the militancy it has become known for over the past year.