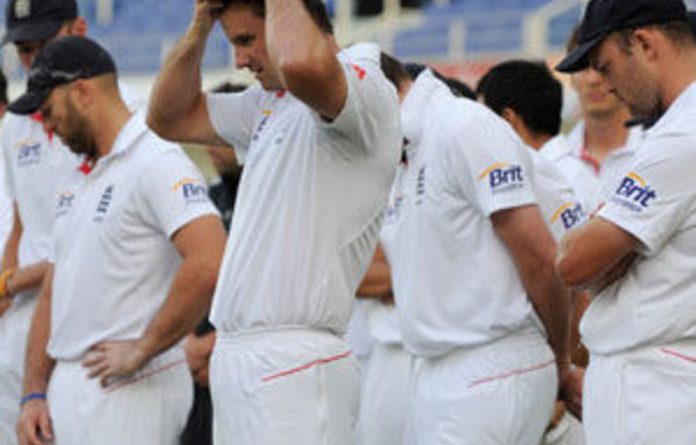 Pakistan’s bowlers sealed an emphatic 71-run win in the third and final Test against England here on Monday; inflicting a 3-0 series whitewash humiliation in the process.

Set a daunting 324-run target, England were bowled out for 252 with paceman Umar Gul taking 4-61 and off-spinner Saeed Ajmal (4-67) to help Pakistan achieve a first-ever Test clean sweep against their opponents.

With the ball turning again it was always a difficult task for England’s batsmen, who have been unable to play the Pakistani spinners throughout the series, on a weary fourth day pitch at Dubai Stadium.

Pakistan won the first Test by 10 wickets and the second by 72 runs in Abu Dhabi.

Pakistan have also become the first team to win a Test after being bowled out for under 100 since 1907 when England, shot out for 76, beat South Africa at Leeds.

It was England’s seventh series whitewash, their first at the hands of Pakistan. Pakistan have now recorded five series whitewashes, their last coming in a 3-0 win over Bangladesh in 2003.

England’s last series whitewash came in 2007 when they were routed by Australia 5-0.

Pakistan domination
So dominating have been Pakistanis spinners that Ajmal finished the series with 24 and Rehman with 19.

Pietersen, who struggled for runs in the series, hit Abdul Rehman for a boundary and then hoisted him for a six to post England’s 100. But Ajmal struck from the other end.

The off-spinner produced a beautiful delivery to bowl Pietersen through the gate for 18. He had a mere 67 runs for the series during which he was out to spinners on five occasions.

In his next over, Ajmal produced another sharp turning delivery which caught the edge of Cook’s bat and was smartly held by a diving Younis Khan in the lone slip.

Ian Bell (10) and Eoin Morgan (31) added 37 for the fifth wicket but again failed to produce a big score in the series as Gul dismissed them in the space of just three runs.

Pakistan took the second new ball at 196-6 and the first ball saw Gul dismissing Stuart Broad (18) and then Graeme Swann on one.

Matt Prior remained not out at 49 when Monty Panesar was dismissed by Rehman for nine.

Trapped
England had looked for big partnerships after resuming at 36-0 but that never transpired.

Pakistan could have wrapped the match earlier had they not dropped two crucial catches, the first off Strauss on 26 when wicket-keeper Adnan Akmal grassed a simple chance off Gul.

But that didn’t hurt Pakistan as Rehman trapped England captain in the very next over. Strauss challenged the decision by Australian umpire Steve Davis but his review failed.

Gul then let off Cook at 24 when he failed to hold a top-edge sweep off Rehman.

Cook had also benefited from a dropped catch on Saturday when Taufiq Umar let him off in the third slip off a miscued drive off Gul when he was four.

Ajmal then broke a dangerous looking 37-run stand between Cook and Jonathan Trott (18) by forcing a top-edge sweep which was smartly snapped up by Rehman at square-leg.