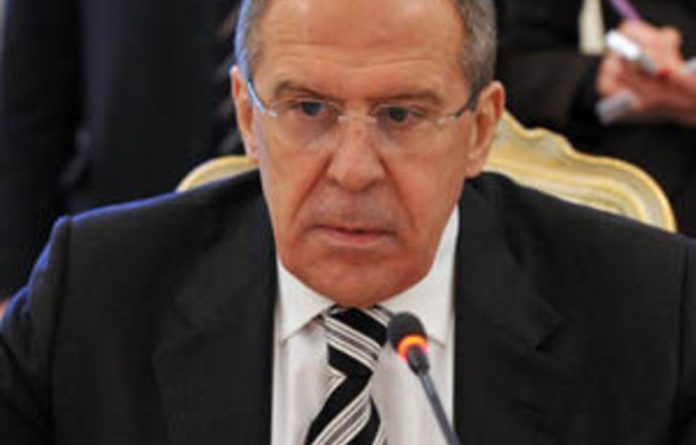 Syrian forces bombarded Homs on Monday, killing 50 people in a sustained assault on several districts of the city which has become a centre of armed opposition to President Bashar al-Assad, the Syrian National Council opposition group said.

Western countries seeking Assad’s downfall were scrambling to find a new diplomatic strategy after failing to enact a UN Security Council resolution that would have backed an Arab League call for Assad to stand aside.

The United States shut its embassy in Damascus and said all staff had left the country due to worsening security. Britain said it withdrew its ambassador from Syria, and would seek further European Union sanctions against Syria.

Russia fought back against blistering criticism from the West for vetoing the resolution on Saturday. Foreign Minister Sergei Lavrov, who is due in Damascus on Tuesday, said condemnations of Moscow’s veto had verged on “hysteria”.

US President Barack Obama said that, however hard Western countries are prepared to lean on Assad diplomatically, they still have no intention of using force to topple him, as they did against Muammar Gaddafi in Libya last year.

“I think it is very important for us to try to resolve this without recourse to outside military intervention. And I think that’s possible,” he told NBC’s Today show.

Assad’s opponents say his tanks and artillery killed more than 200 people in the city on Friday night in the bloodiest incident of the 11-month-old uprising against his rule.

That attack, branded a “massacre” by France and “unspeakable” by Obama, had set the stage for intense efforts over the weekend to lobby Moscow not to block the UN Security Council resolution.

But Russia has argued that the resolution was one-sided and would have amounted to taking the side of Assad’s opponents in a civil war. China also vetoed the measure, by most accounts following Russia’s lead.

“It is sad that the co-authors decided to hastily put the resolution to a vote, even though we appealed to them with a request to give it a few more days” until after his own planned trip to Damascus, Lavrov said.

“Some of the voices heard in the West with evaluations of the results of the vote in the UN Security Council on the Syria resolution sound, I would say, improper, somewhere on the verge of hysteria,” Lavrov told reporters after meeting the foreign minister of Bahrain, one of the Arab states that has sought a tougher stance against Assad.

Peace dialogue
Lavrov has said Russia favours a peace dialogue in Syria that is free of outside interference and preconditions.

He repeated the message in a phone conversation with Arab League chief Nabil Elaraby, the Russian Foreign Ministry said.

The opposition Syrian Observatory for Human Rights said it had the names of 43 people killed in Monday’s bombardment of Homs. Television footage showed smoke rising from buildings, with explosions echoing in the background.

“This is the most violent bombardment in recent days,” said one activist in Syria who was in touch with Homs residents. Another activist said government troops were using multiple rocket launchers in the attack.

Damascus denies firing on houses and says images of dead bodies on the Internet have been staged. State media said on Monday “armed terrorist groups” were firing mortars in the city, setting fire to tyres and blowing up empty buildings to give the impression that Homs was under fire from Assad’s forces.

State news agency SANA described attacks in the city by “terrorists” who it said killed a textile factory worker. It said they also killed three officers and abducted several soldiers in Jabal al-Zawiya in the northern Idlib province.

Reports from activists and authorities are hard to verify because Syria restricts access for independent media.

“They want to drive the Free Syrian Army out,” said Baba Amro resident Hussein Nader by telephone, referring to the force of army deserters and rebels who have held parts of Homs for months. “Rockets are falling seconds apart on the same target.”

Another resident, Omar Shakir, said activists had obtained information that the shelling would continue until Thursday, when troops were expected to move into Homs. “We have no one but God — everybody abandoned us,” he said.

Activists said a blast hit an oil pipeline feeding a main refinery in Homs, the second attack on the pipeline in a week, and that three people died when the opposition-held town of Zabadani, near the Lebanese border, came under fire on Monday.

Syrian army defectors announced they were organising a new Higher Revolutionary Council to supersede the Free Syrian Army (FSA) as the main armed force battling Assad’s rule. The new body would be commanded by General Ahmed al-Sheikh, the highest-ranking officer to defect to Turkey from government forces.

A local wing of the FSA in Zabadani warned it would start attacking “sensitive and strategic [targets] of the regime” unless the army pulled back from the town by Tuesday morning.

Arab League chief Elaraby said the escalation was pushing the country toward civil war. The league’s strong stance towards Assad — it suspended Syria last year and withdrew inspectors last month after concluding Assad’s government was not fulfilling a peace plan — has put Assad’s powerful Arab neighbours on the same side as the West.

‘Kick in the ass’
Condemnation of Russia’s veto in the West has been extraordinarily strong by diplomatic standards. US Secretary of State Hillary Clinton called the veto a “travesty”. A chorus of European and American officials said Russia and China would bear responsibility for future bloodshed.

France’s Defence Minister Gerard Longuet said on Monday: “There are political cultures which deserve a kick in the ass … To accept that a dictator can operate freely is disgraceful for governments that accept it.”

The Syrian National Council said the Russian and Chinese vetoes of the resolution had given Assad a “licence to kill”.

Syria is a long-serving ally of Moscow, one of the few in the region, and a buyer of its arms exports. Russia clearly still hopes to play an important diplomatic role with Assad, and says it wants to encourage him to adopt reforms.

Fawaz Tello, a senior member of the opposition SNC called the Russian position “shameful” and Moscow’s talk of reform hypocritical, telling Reuters: “The Russians know that such a thuggish secret police regime cannot be reformed.”

The veto bore the stamp of Prime Minister Vladimir Putin, who intends to return in a March election to the presidency he held from 2000 to 2008, when he was known for firmly opposing what he saw as efforts by the West to extend its influence at Russia’s expense.

In an article in a government newspaper published on Monday, former Russian Prime Minister Yevgeny Primakov said Washington was seeking to oust Iranian ally Assad as part of a strategy to increase its influence in the Arab world and isolate Tehran.

“The United States and its Nato allies want to exploit the situation that arose in the spring of 2011 in the Arab world with the aim of getting rid of Arab regimes it dislikes,” wrote Primakov, an Arabic-speaking Middle East expert who also served as Russian foreign minister and spy chief.

‘Direct confrontation’
The latest offensive by Assad’s forces may have been planned for some time, and was signalled in a speech last month when he vowed to strike “terrorists” with an iron fist.

“The regime 10 days ago took a decision to confront the opposition in a different manner,” said Ayham Kamel, of the Eurasia Group risk consultancy. “The tactics before were targeted. Now they are set on more direct confrontation with the FSA and opposition activists”.

Clinton said on Sunday the United States would work with other nations to try to tighten sanctions against Assad’s government in the absence of a UN resolution.

Washington and Europe have already imposed sanctions, but without a Security Council resolution it is difficult to enact measures that stop other countries from trading with Syria. Syria is also far less dependent on oil exports than other states in the region, making it less vulnerable to an embargo.

“We will work to expose those who are still funding the regime and sending it weapons that are used against defenceless Syrians, including women and children,” Clinton said.

“Currently, the situation in Syria is extremely complex. Simplistically supporting one side and suppressing the other might seem a helpful way of turning things around, but in fact it would be sowing fresh seeds of disaster,” the People’s Daily said. — Reuters

Our readers write in about: violence, foreign business, the ICC and Syria
Read more
World

Since the start of Syria's war in 2011, numerous efforts to halt the conflict through diplomacy have failed
Read more
World

The first-person shooter game is a low-cost spinoff of bestseller "Call of Duty" that glorifies the group's battles in the ongoing Syrian conflict.
Read more
World

After months of stalemate, the Syrian talks are expected to focus primarily on a new constitution and elections and two reforms proposed by the UN.
Read more
World

Rebels have told 'Al Jazeera' that Turkey has indirectly sent a stark warning to any faction that resists the operation.
Read more
Advertising
Continue to the category
Politics