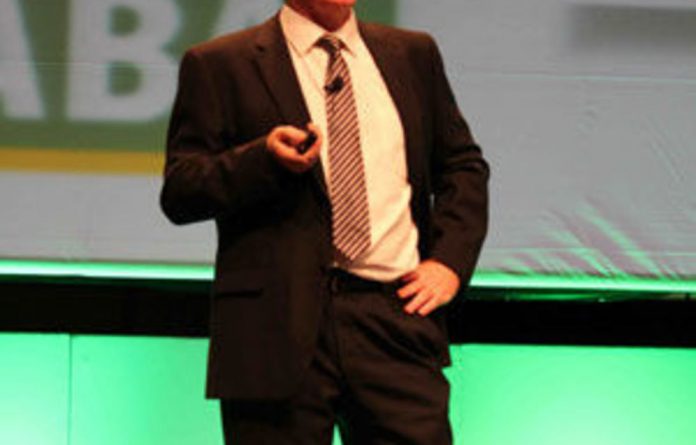 Global warming is nothing but a ruse to create a massive global bureaucracy that will rule the world with impunity — this was the surprising claim of mathematician and engineer Dr David Evans who delivered Monday’s keynote address at the Mining Indaba in Cape Town.

The former consultant for Australia’s department of climate change served up this argument to around 1 000 delegates, complete with satirical pictures of the globe’s would-be rulers should the scenario prove true — which included European Council president Herman van Rompuy.

“Who are you going to believe, the government, scientists or the data? It’s easy for them to dismiss us; it threatens what they’re really after — complete world domination,” Evans told the audience.

In essence, Evans argued the current rises in global temperatures were not indicative of an imminent Armageddon, but were part of a “global cooling and warming cycle”.

According to the data presented by Evans, the Earth heats up and then cools down over specified periods, and the reason global warming has gathered so much traction is because the globe is currently operating within in a warming cycle.

“All of this data is impeccably sourced and supports the sceptic’s view. The climate models are fundamentally flawed. Their assumed theory of three-fold amplification does not in fact exist,” Evans added.

Although it is at odds with theories the world over, Evans’s standpoint is compatible with data collected on climate change and global warming.

His performance was also well received by an audience of miners, who
come from an industry that often feels the pinch of climate control in
the regulation of their industries.

But one doesn’t have to travel far to find critics of Evans’s theory and research.

A few rows back in the audience was a shocked Christine Colvin, the World Wildlife Federation’s Fresh Water Program manager, who described Evans’ presentation as “contradictory” and based on facts that have been “cherry picked”.

“This guy is playing to the peanut gallery. It’s a crackpot idea to think global warming regulation is a joint effort. Clearly Mr Evans didn’t attend COP17 where its plain to see that key roleplayers can’t
pull together anything,” Colvin told the Mail & Guardian.

Travel a little further and you’ll find even more critics.

“This flies in the face of science and goes against mounds of data that’s been collected since the 1950s. There is absolutely no evidence to suggest what he’s saying is true,” Tadross said.

While Tadross offered tacit backing for Evans’s view that the planet operates within a heating and cooling cycle, he argued the “human effect” had “thrown things off balance.”

“The influence of humans has led to further warming — there is no doubt about it. This pushes the oscillations even further out of sync, leading to what we know as global warming,” he said.

Tadross also warned that Evans’s theory, and others like it, severely harmed efforts to reduce global warming.

“Psychologically people latch onto information presented as facts — even if they aren’t true. People should look into these things themselves and make their own choice — but they must be educated choices,” Tadross said.

Intellectual swagger versus genuine concern
In spite of his detractors, Evans and his movement Science Speak have gained support worldwide.

Delivering presentations and lectures throughout the globe, Evans’ theory has gained traction, with him estimating his followers to be in the “tens of thousands” mainly due to an effective internet marketing campaign.

This number would be significantly more, he said, if it weren’t for what Evans described as an “intellectual upper class of word users” that are “parasites enriching themselves by regulating CO2”.

“Anyone who has ever gone up against the alarmists have had their funding cut and are isolated. They want to shut you up and knock you out of the debate,” Evans said.

Evidence in support of his claims of sabotage and maligning is the fact that Mining Indaba organisers weathered a storm of criticism for allowing Evan to deliver his address.

But climatologist Simon Gear said there were different aspects to this type of debate, which “muddies the waters” of the global warming debate.

“There is the intellectual swagger espoused by someone like Evans, and what I view as genuine concern shown by scientists. There is the difference in the reasons for them doing what they’re doing,” Gear told the M&G.

Gear added the measures taken to prevent global warming were beneficial, even if it did turn out to be a ruse.

“Everything we do to combat global warming is something we should be doing to protect our environment and make it more sustainable, and we aren’t going to lose anything by doing that,” he said.

But Evans warned people were at risk of losing civil liberties if they bought into the “global warming scam”.

“One day we will all need to stand up to this global bureaucratic class — before it’s too late and they have exactly where they want us,” Evans said.

Mining for goodwill will reap profits