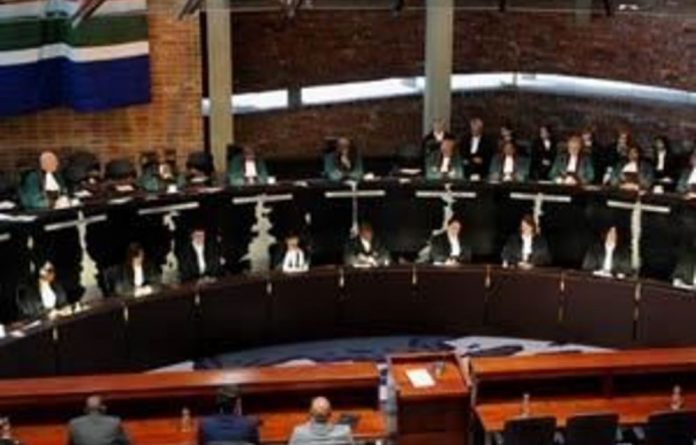 The NCR and Seri say the current interpretation infringes on certain basic rights including the right to equality, housing and property, while Basa has said that changing the interpretation could endanger the entire credit industry.

A Constitutional Court ruling on the matter could have serious implications for South Africa’s credit-reliant population and the country’s banking industry. According to Basa, the total outstanding credit balance owed to South African banks in September 2011 was R1 119.3-billion.

The law being scrutinised is Section 129 of the National Credit Act, which states that a consumer in default of a credit agreement should to be given notice of his default and the opportunity to refer the agreement to a debt counsellor or to a form of alternative dispute resolution.

The court will hear arguments on whether it is enough for a bank to simply send a section 129 notice to a defaulting customer or whether it must ensure that the customer actually receives the notice.

The case originated from a dispute between Standard Bank and a customer, Mashilo Sebola, who defaulted on his mortgage repayments. According to the Credit Act, the bank sent him a section 129 notice, notifying him of its intent to attach his home for sale in execution of his mortgage.

But he never received the notice, or even a summons. He argued in court that this should suffice as a defence against the bank’s claim enforcing the credit agreement.

Both the High Court and Supreme Court dismissed his application, saying that the bank only needed to show that it had sent the notice, and not that he had received it.

Sebola appealed to the Constitutional Court, arguing that the fact he did not receive the notice should be considered as a defence against the bank’s enforcement of the credit agreement.

Standard Bank has since resolved the matter with Sebola and has argued that the issue is moot. But the question of how the National Credit Act should be interpreted will still be heard at the Constitutional Court.

The NCR, acting as a friend of the court, has come down on the side of the consumer in the matters, saying it wants to promote non-litigious methods to resolve such cases.

“There is a lack of capacity in the court system to deal with the volume of credit-related cases, and given the ever-increasing volume of such cases, this backlog continues to grow. It says that where alternative dispute resolution is pursued — for example, debt counselling — customers are more likely to go on to make their payments.

The NCR argues that in cases where an opportunistic consumer deliberately fails to collect a registered letter, the credit provider can protect itself by having a sheriff deliver the notice. This, it argues, would likely only apply to a relatively small number of cases and would cost between R28 and R44. These costs could be born by the consumer and would be minor compared to the cost of enforcing the credit agreement through legal means, it said.

Seri, also a friend of the court, has a slightly different argument. It says banks need only prove to a judge that they have sent the notice as required by the National Credit Act, for example using registered mail. However, the judge should also be open to having the customer contest this in court, as in the Sebola case.

“The enforcement of a credit agreement bites hardest where the debt is secured against a consumer’s property, and this always has the potential to invade Constitutional rights,” said Kate Tissington, research and advocacy officer at Seri.

But according to Basa, a third friend of the court,the interpretations put forward by the NCR and Seri would harm the effective functioning of the credit market. In court papers, the organisation said these interpretations would require personal delivery for all section 129 notices.

“It would make the business of providing credit even more risky and onerous than it already is, which would have a chilling effect on the South African credit market,” it said.

Basa spokesperson Nicky Lala-Mohan said this was because it could have the unintended consequence of creating a practice where people routinely claim they did not receive the notices.

The case will be heard on Tuesday.

High court ruling to allow parents to bury unborn babies offers dignity, but not to all