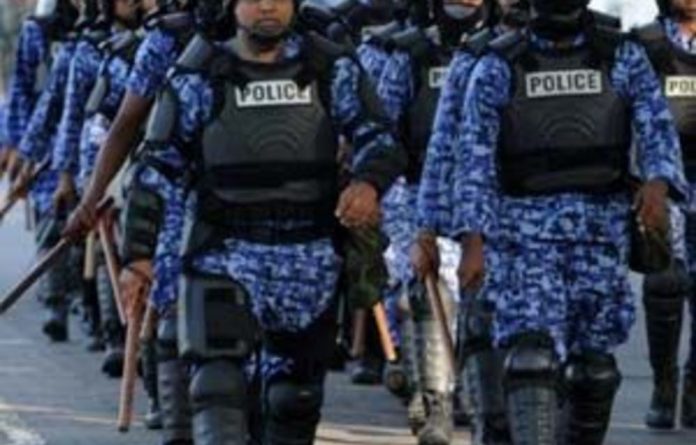 Rioting broke out in the Maldives after Mohamed Nasheed, the ousted president, claimed he was forced to give up his office at gunpoint, raising the prospect of a fierce struggle for power.

Smoke rose above the capital, Male, after Nasheed supporters threw petrol bombs at police and attacked a private television station that had been critical of his government. Earlier, Nasheed’s party, the Maldivian Democratic Party (MDP), said he was beaten when riot police fired teargas and launched baton charges against hundreds of his supporters who had gathered in Republic Square.

“We strongly condemned the violent attack by the Maldivian police service on President Nasheed and senior officials of the MDP,” the party said. “President Nasheed is being beaten up as of now in an ongoing peaceful protest.”

The 44-year-old pro-democracy activist resigned on Tuesday under pressure from the military after a mutiny by police officers and clashes between demonstrators.

“There were guns all around me and they told me they wouldn’t hesitate to use them if I didn’t resign,” Nasheed, who won the former British protectorate’s first multiparty elections in 2008, told reporters.

Polarised country
Nasheed, an internationally respected campaigner against global warming, said he and his supporters would “try [their] best to bring back the lawful government” and called on the Indian Ocean nation’s chief justice “to look into the matter of who was behind this coup”.

His words contradicted his replacement, Mohamed Waheed Hassan Manik, the former vice-president, who said the transfer of power had been peaceful and constitutional. “Do I look like someone who will bring about a coup d’état?” Waheed asked reporters. “There was no plan. I was not prepared at all.” He called for a government of national unity.

Ban Ki-moon, the UN secretary general, said he hoped the “handover of power, which has been announced as a constitutional step to avoid further violence and instability, will lead to the peaceful resolution of the political crisis that has polarised the country”.

Nasheed’s resignation was the culmination of weeks of protests following his order to the military to arrest a judge, whom he accused of blocking multimillion-dollar corruption cases against members of the government of former president Maumoon Abdul Gayoom, who ruled for 30 years before Nasheed came to power.

The standoff pitted a police force, still largely loyal to Gayoom, against a military more supportive of Nasheed. However, it appears to have been elements of the same military that marched the president into his own office to sign his resignation, a close aide told Reuters in the first witness account of Nasheed’s exit.

Nasheed was brought to his office, met his Cabinet, and then went on television to announce his resignation, Roberts said from an undisclosed location.

“He was forced to resign by the military,” said Roberts, a 32-year-old British citizen. “He could have gone down shooting, but he didn’t want blood on his hands.”

Nasheed, educated in the UK, was detained dozens of times during the rule of Gayoom, earning the nickname “the Mandela of the Maldives”. He may now be protected to some extent by the international reputation he has earned campaigning on climate change and rising seas, which threaten to engulf the low-lying nation.

David Cameron, the British prime minister, appears to have been impressed by Nasheed’s efforts, calling him his “new best friend” in an interview last year. —