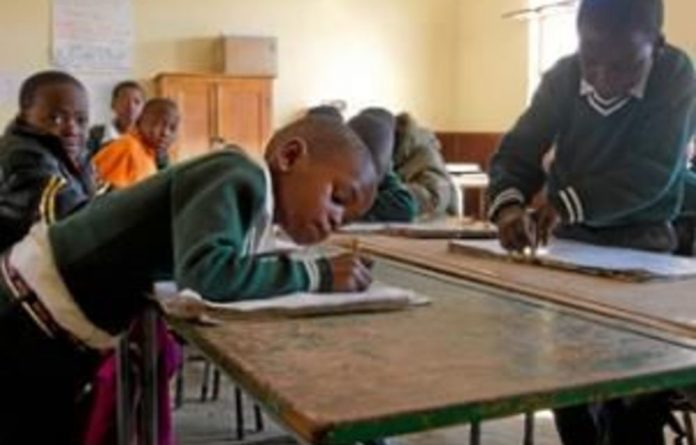 Two thirds of grade 6 pupils in South Africa did not have the minimum knowledge about HIV/ Aids needed to protect their health, recently published research has found.

This is “alarming”, the researchers say, because these learners have an average age of about 13 and “are entering a stage of development where they may become sexually active, and/or may choose to become involved in high-risk behaviour”.

This is one of the findings in the latest Southern and Eastern Africa Consortium for Monitoring Educational Quality (Saqmec) report, based on research conducted in 15 countries in 2007 and published last month on the basic education department’s website.

The department claims that the situation today “is under extreme control”, however, and cited the introduction of Life Orientation as a school subject in 1998, providing HIV/Aids and other social education, as a reason for this.
In 2009 more than five million South Africans were living with HIV.

“The results [indicate] that major alarm bells should be ringing in South Africa [because] knowledge levels about HIV and Aids among around two-thirds of grade 6 learners in 2007 were below Saqmec’s ‘minimal’ knowledge benchmark — [This] is defined as mastery of at least half of the official school curriculum,” the study’s authors, Meshack Moloi and Mark Chetty wrote.

Speaking for the basic education department, Panyaza Lesufi said the department’s HIV/Aids awareness budget and programmes have reached more learners since 2007, and “recently the department of health has approached us on their voluntary testing model which we are currently in discussion to assist in addressing [HIV awareness levels]”, Lesufi said.

There were also large provincial variations in the pupils’ HIV/Aids knowledge, Saqmec found. Gauteng scored just below Tanzania, the highest scoring country. In contrast, Limpopo’s score placed it below the lowest country, Mauritius.

Limpopo education department Pat Kgomo said the department was “hopeful” awareness in primary schools had improved since 2007. “Before 2008 the province did not have someone assigned to specifically deal with HIV-awareness programmes in schools but now we have a person to do that,” he said.

School-level awareness of HIV/Aids was one focus of the large Saqmec project, which also compared reading and mathematics attainment among grade six learners and their teachers in the 15 countries it surveyed.

Back to school on June 8