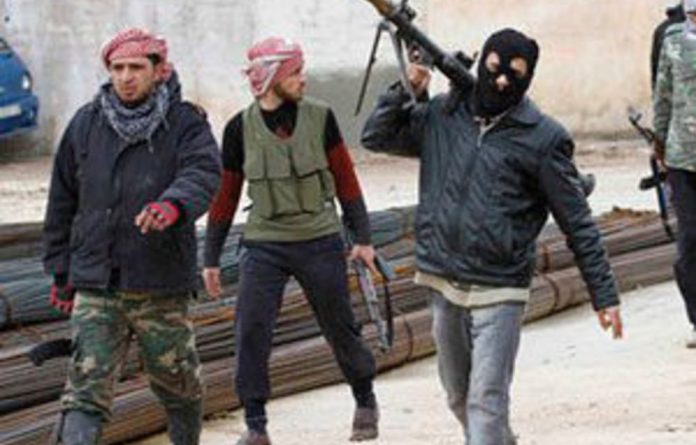 Two explosions rocked Syria’s second largest city of Aleppo on Friday, state television said as it aired footage of mangled bodies in pools of blood in the street outside a row of shattered buildings.

The report blamed one of the blasts on a car bomb that targeted a military intelligence centre and said another exploded near a centre for the security forces.

It blamed the attack on “armed terrorist gangs” and reported a number of casualties, including soldiers.

The television later showed bulldozers clearing shattered concrete strewn across a broad avenue in the city.

Several people interviewed by the channel denounced Turkey and Qatar for not standing by the regime in Syria as it seeks to put down a revolt that broke out last March.

Rami Abdel Rahman, head of the Britain-based Syrian Observatory for Human Rights, said there were two blasts in the northern city, after earlier reporting a total of three explosions.

Aleppo has been largely spared the unrest that has rocked Syria for nearly a year, leaving more than 6 000 people dead according to rights groups.

Friday’s blasts were the biggest since two suicide bombings in the capital Damascus, one of which killed 44 people in December and the second 26 people in January.

Protest hub
Inshaat is next to the protest hub of Baba Amr in Homs, which has been subjected to a withering assault by regime forces since Saturday that has killed more than 400 people, activists say.

The violence escalated ahead of planned nationwide protests to denounce Russia’s steadfast support of the Assad regime.

Moscow, a staunch ally of Assad along with China, has stood in the way of repeated attempts at the United Nations to adopt a resolution condemning the bloodshed in Syria.

Rights groups estimate more than 6 000 people have died in a fierce government crackdown to put down a revolt that erupted nearly a year ago.

Crushing opponents
He urged “a transition from the current government that has been assaulting its people”.

Troops trying to crush opponents of Assad have killed at least 400 people in a six-day onslaught on Homs city, opposition activists say.

More than 80 people were killed across Syria on Thursday alone, all but 30 of them in Homs.

“It’s quite clear that this is a regime that is hell-bent on killing, murdering and maiming its own citizens,” Cameron told reporters in Stockholm. “It really is appalling, the scenes of destruction in Homs.”

He called for “transition and change in Syria”.

‘Massacre’
Despite mounting calls for military aid to outgunned and outnumbered rebel troops in Syria, Foreign Secretary William Hague stressed Britain has no such plans.

“We cannot let Syrian people die every day and the international community will follow blindly,” Davutoglu said in Washington.

Germany has backed a proposed joint Arab League-UN mission to monitor the situation in Syria, but other major powers were more cautious.

Prospects for the mission that the pan-Arab bloc’s chief has proposed to UN leader Ban Ki-moon could depend on an Arab League foreign ministers’ meeting this weekend and the backing of the major powers.

Resolving the crisis
“In addition to the establishment of a contact group of ‘friends of a democratic Syria’ we must also undertake a new attempt to resolve the crisis through the United Nations,” Westerwelle said in Berlin.

He said a joint Arab League-UN observer mission and the naming of a UN special representative on the Syria conflict “would serve peace and balance. And both would be a clear signal by the international community to the Assad regime.”

“My message to my Russian colleagues is they too need to recognise the reality of the situation on the ground” in Syria, said Ashton, who was making a two-day visit to Mexico.

Moscow has insisted that any solution to end nearly one year of bloodshed must come from within Syria. — AFP