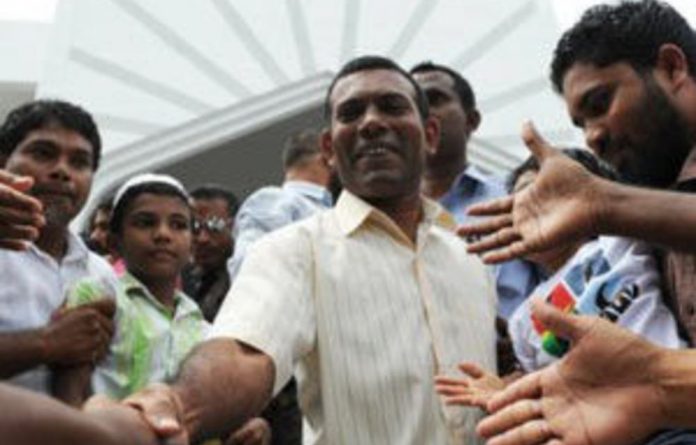 A court in the Maldives has issued an arrest warrant against Mohamed Nasheed, the country’s former president forced to resign by elements within the police and army earlier this week, raising fears of renewed street violence after more than 48 hours of political turmoil.

Ahmed Naseem, foreign minister of the Maldives and a supporter of Nasheed, made an impassioned plea for foreign intervention.

“We need them to help solve the issue of this illegal government that has come to power in a coup,” Naseem said.

Scores were injured on Wednesday night, some seriously, in violence after police used teargas and baton charges to break up what witnesses and Amnesty International said were peaceful marches by the ousted president’s supporters. Casualties included senior politicians loyal to Nasheed.

Aid agencies and hospitals were trying to establish the exact number of those hurt in the clashes. Reports of two deaths appeared unfounded.

“We are not aware of any [fatalities] but information is very difficult to validate,” said Ahmed Shifaz of the Maldives Red Crescent.

Though the streets of Male, the capital, and outlying areas were reported to be calm on Thursday morning, concerns remain that the ongoing power struggle will result in fresh violence.

“It is tense and chaotic. They are coming to arrest [Nasheed] now. I don’t know what will happen if they do. God help us,” said Naseem.

Weeks of protests
There were reports of the destruction of pre-Islamic era relics by a group of men who broke into the national museum. The former president and his party have been repeatedly criticised by Islamist groups in the Maldives, where almost all 330 000 inhabitants are Sunni Muslim.

Nasheed (43) has said he was forced out of office at gunpoint by a detachment of soldiers led by senior officers. Shortly after his resignation, the vice-president, Mohammed Waheed Hassan, was sworn in as his replacement.

Hassan has denied that his predecessor was coerced in any way and has called for a government of national unity.

Nasheed’s Maldivian Democratic Party (MDP) said it will not join any such administration and will continue to campaign for the return of Nasheed, who is internationally respected for his efforts to raise awareness of global warming.

Senior MDP officials accuse elements within the security forces loyal to Mamoon Abdul Gayoom, who was defeated by Nasheed in the country’s 2008 election, of engineering their leader’s ousting.

Gayoom ruled the Maldives, a former British protectorate, for 30 years.

The ouster of Nasheed was the culmination of weeks of protests following a presidential order to the military to arrest a judge, accused of blocking multimillion-dollar corruption cases against members of Gayoom’s government.

Mandela of the Maldives
The stand-off pitted a police force still largely loyal to Gayoom against a military that was more supportive of Nasheed.

However it appears to have been elements of the military that marched the president into his own office to sign his own resignation, according to Paul Roberts, Nasheed’s communications adviser, and an account written by Nasheed and published in the New York Times on Wednesday.

“Let the Maldives be a lesson for aspiring democrats everywhere: the dictator can be removed in a day, but it can take years to stamp out the lingering remnants of his dictatorship,” Nasheed wrote.

Nasheed, educated in the UK, was detained dozens of times during the rule of Gayoom, earning him the nickname “the Mandela of the Maldives”.

Events don’t appear to have had any impact so far on the tourists who fill the many luxury resorts of the 1 800-island archipelago.

A senior US diplomat is expected to arrive in the Maldives on Saturday. —