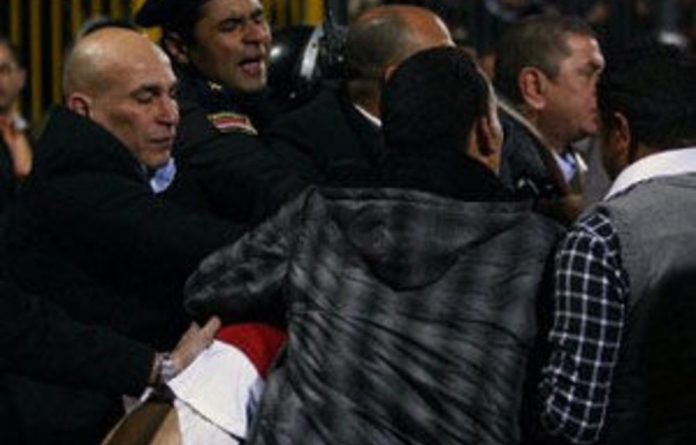 Egypt’s ruling generals have a new enemy: the legions of angry soccer fans who have injected fervour into recent protests demanding the military step down and battled police for days in the streets of Cairo.

Known as Ultras and long viewed as hooligans, they have grown increasingly political, starting with last year’s uprising, and were pushed over the edge by the deadly riots at a soccer match last week.

It’s a sign of how the military’s rocky handling of the transition is driving more and more Egyptians into activism at a time when many are frustrated with the generals who took over from Hosni Mubarak a year ago, and by growing economic and security woes.

Ultra members have been credited with playing a major role in the 18-day popular uprising that toppled long-time dictator Hosni Mubarak, as well as recent street clashes with police. They were the chief defenders of Tahrir Square, the uprising’s epicentre, when Mubarak loyalists on camel and horse-back charged protesters on February 2 2011, one of the deadliest days of the uprising.

The deaths of 74 people in last week’s soccer riots — mostly Ultras who supported the Cairo-based Al-Ahly club — has unleashed such fury in the movement’s ranks that many expect the Ultras to turn out in even greater numbers in future street protests, whether against military rule or to press demands for more sweeping reforms.

“Their participation in protests will significantly increase,” predicted Mohammed Gamal Bashir, author of an Arabic-language book on the Ultras published in December.

“Authorities have made an enemy of them and that is a very big mistake. They have passion, no expectations and don’t want to be labelled politically. In short, they enter the struggle but don’t care about the likely fruits of their role.”

Detention and intimidation
The Ultras’ history of enmity with the regime made them a perfect fit in the ranks of the pro-democracy protesters who engineered Mubarak’s ouster.

For four years before Mubarak’s fall, Ultras clashed almost weekly with security forces in Egyptian stadiums and were subjected to random arrests, detention and intimidation. Their rank-and-file swelled with thousands of disaffected, unemployed and often uneducated youth who despised the police and a regime that offered them little hope for the future.

Since the deadly riots, the Ultras have been lionized by the independent press and rights activists as true and brave patriots who share the ideals of the revolutionaries behind Mubarak’s ouster.

“We defend what is right, we don’t brag and we don’t accept credit for what we do,” declared one Ultras leader, who only wanted to be identified by his first name, Salah.

The lavish praise, however, has concealed the movement’s origins as essentially rabid soccer fans often willing to engage in violent clashes with supporters of rival clubs, as well as the security forces.

The February 1 riot, the worst soccer-related incident in Egyptian history, took place in the city of Port Said on the Mediterranean, where Al-Ahly, Egypt’s most popular team, played the home team Al-Masry in a league game. Al-Masry won 3-1.

The deaths of so many Al-Ahly supporters, mostly young men in their teens and 20s, has dominated Egypt’s political agenda over the past week, making front-page headlines and fuelling countless conspiracy theories.

Many activists and commentators have blamed the incident on police negligence and military inaction, despite a multitude of signs of trouble ahead of the match, which pitted two sides with a long history of animosity and fan violence. It also sparked days of clashes between police and protesters in Cairo and elsewhere in the country. A total of 15 people, mostly in Cairo, were killed.

Stoking the Ultras’ fury, the nation’s military leader, Field Marshal Hussein Tantawi, dismissed the tragedy in comments to the media as an “incident that can happen anywhere in the world.” A much larger segment of the population was infuriated when he said he was vexed by people’s inability to put a stop to such incidents, a comment interpreted as a call for Egyptians to take the law into their own hands.

The Ultras are the latest large segment of Egyptians to turn against the nation’s ruling generals.

In October, 27 people, mostly Christians, were killed by troops during a protest outside the Nile-side state television headquarters. Video clips posted on social networks showed army vehicles running over the protesters. In December, army troops were captured on camera beating and stomping on women protesters, including one that was stripped half-naked.

The two incidents caused an uproar and led to charges that the generals were no better than Mubarak. The fury added to the growing resentment of the generals for the torture of detainees and the hauling of at least 12 000 civilians, many of them protesters, before military tribunals for trial since Mubarak’s ouster.

Distinctive group
In large part, Egypt’s Ultras mirror similar movements in southern Europe, particularly Italy. They first surfaced in 2007, but only burst on the local scene as a distinctive group after Mubarak’s fall. Since then, they have made their presence felt in matches with fireworks, incessant chanting and songs taunting the military leadership and police.

“Hey government, tomorrow you will be cleansed by the people’s hands. Hey stupid regime, when will you understand that what I demand is freedom, freedom, freedom?” goes one Ultra chant.

They have drawn hundreds of thousands of members from across Egypt, capitalising on the nation’s obsession with soccer.

Their hatred for the police is both deep and uncompromising. Like many Egyptians under Mubarak’s authoritarian regime, Ultra members were randomly rounded up and detained, intimidated and harassed by the police.

“We have members who come from areas so poor, so densely populated it is difficult to breathe there, let alone walk or exercise,” Ahmed Adel, a leader of the Ultras-White Knights, which supports the Cairo club Zamalek, Al-Ahly’s cross-city arch rival.

“We can cope with poverty, but we cannot tolerate oppression. We know what social justice is and we want it.” — Sapa-AP