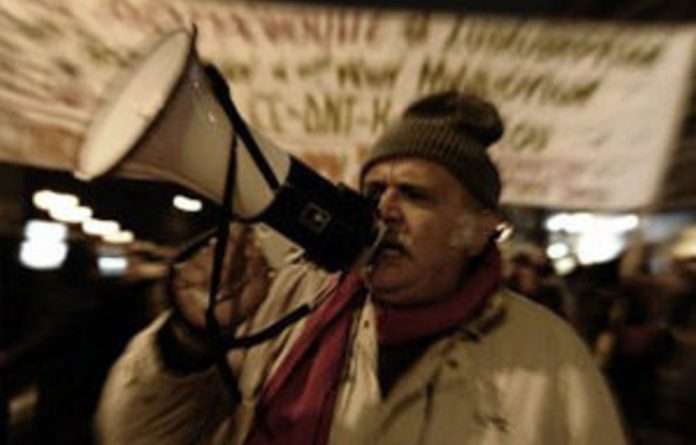 European finance ministers are piling the pressure on Greece to make good on pledges to slash public spending to the bone before closing a deal on a new €130-billion bailout — even as the prospect of a disastrous default looms closer.

Following weeks of brinkmanship that have poisoned relations between the bankrupt country and its eurozone creditors, ministers and senior officials from the Eurogroup, the European Central Bank, the European commission and the International Monetary Fund have been wrangling over whether to activate the bailout, which would prevent an outright insolvency at the end of March, when Greece has to redeem more than €14-billion in debt.

Despite announcements in Athens and Frankfurt that Greece’s government had yielded to savage new terms from the eurozone to qualify for the bailout, it was unclear whether the complex new rescue package would be finalised at the parties’ meeting in Brussels.

The emphasis, though, was on first getting Greece to deliver its side of the bargain.

“It’s up to the Greek government, by concrete actions through legislation and other actions, to convince its European partners that the second [bailout] programme can be made to work,” said Olli Rehn, the European commissioner for monetary affairs.

German Finance Minister Wolfgang Schäuble down-played expectations of any breakthrough on the bailout which was originally formulated by EU leaders last October. “I don’t think we’ll come to any results tonight. The negotiations have made progress but we’re not there yet,” he said.

‘Final decision’
That was echoed by the president of the Eurogroup, Jean-Claude Juncker: “I don’t think we will have a definitive and final decision tonight,” the leader of the group of eurozone finance ministers said.

Greece’s finance minister, Evangelos Venizelos, was insistent that the bailout be concluded but ran into strong reservations from Germany. “We finally have a staff-level agreement for a new, strong and credible programme,” said Venizelos. “We also have a deal with the private creditors on the basic parameters. We now need the political endorsement of the Eurogroup for the final step.”

But, amid a mounting sense of crisis, it is possible that any deal that might be struck may prove inadequate. With unemployment soaring, revenue sources drying up, recession deepening and social unrest increasing, there is palpable pessimism and resentment on both sides. In Greece, the idea is growing that austerity cannot work and that default is more of a question of “when”, not “if”.

“Just because Greek leaders have agreed on targets does not mean that they will or indeed can be delivered,” said Sony Kapoor of Re-Define, an economics think tank in Brussels. “We have just reached a temporary truce. The war will continue to be fought for some time to come.”

European commission sources said a signed memorandum committing the Greek government to a further €3.3bn in savings — which still has to go through Parliament in Athens this weekend — had to be delivered within five days to meet the tight deadlines for avoiding default.

Following a gruelling month of wrangling and number-crunching in Athens and final negotiations with the Greeks that ran until early on Thursday morning, officials from the “troika” of the European commission, the ECB and the IMF departed for Brussels, leaving behind a country pledging to slash 15 000 public sector jobs this year and 150 000 within three years, cut the minimum wage by 20% and reduce pensions.

In return for the pledges, Greece will get the €130-billion, on top of the €110-billion decided nearly two years ago. Greece’s private creditors will take up to 70% losses on their loans to Greece through a debt-swap accord that would halve Athens’s private sector borrowings to €100-billion. Negotiations resumed in Paris on Thursday on the “haircuts” for Greece’s private lenders.

The pan-European regulator, the European Banking Authority, admitted on Thursday that it had yet to complete a detailed analysis of the plans submitted by the European banks that were found to need to raise €115-billion in last year’s stress tests. However, they will not be subjected to new stress tests in 2012 while they cover the already identified shortfalls.

If a deal is struck on the new bailout, the IMF will need to confirm that the arrangement will eventually render Greek debt levels sustainable — the yardstick being that debt falls to 120% of gross domestic product by 2020, from 160% currently.

Despite the political pessimism, the markets responded positively to the signals that Greece would be thrown a new lifeline. European stocks rose and the euro neared a two-month high against the dollar.

“There is clearly some very encouraging news coming out of Athens,” said Christine Lagarde, the head of the IMF. “It’s positive.” —